I tried to keep all of my reports together but there isn’t enough room. Hope that doesn’t keep you from reading! Thank you for your time.

The rain began innocently enough, but it was only a matter of time until we were under complete attack by the stinging pellets of precipitation that were streaking from the sky. Well, it was kind of just sprinkling a little harder, but I felt that it was turning into something personal. We had finally found the time to sit and take a breather (and get a little Star Wars action on) and our plans were now in jeopardy.

Greg pointed out an unclaimed bench under a huge umbrella and we made a quick meander (oxymoron much?) towards it before anyone else could stake a claim. I didn’t want to get wet but I didn’t want to stop drinking my rum and Coke either, so the fact that we made it (even at such a slow pace) was kind of a miracle. The rain started to get a little heavier and it was becoming obvious that we were in for more than the little shower that we were expecting.

We jumped onto the bench and shoved our heads closer to the inside of the umbrella. All of a sudden we were able to look over a large bush to see that the Star Wars character extravaganza was getting pulled apart at a record pace. Now, that was something we had never seen before. One minute we’ve got a sparkling C-3PO and the next we have a bunch of guys making the entire stage disappear. It was actually pretty amazing. They were completely finished in about two minutes flat. Just in time to miss the rest of the deluge. 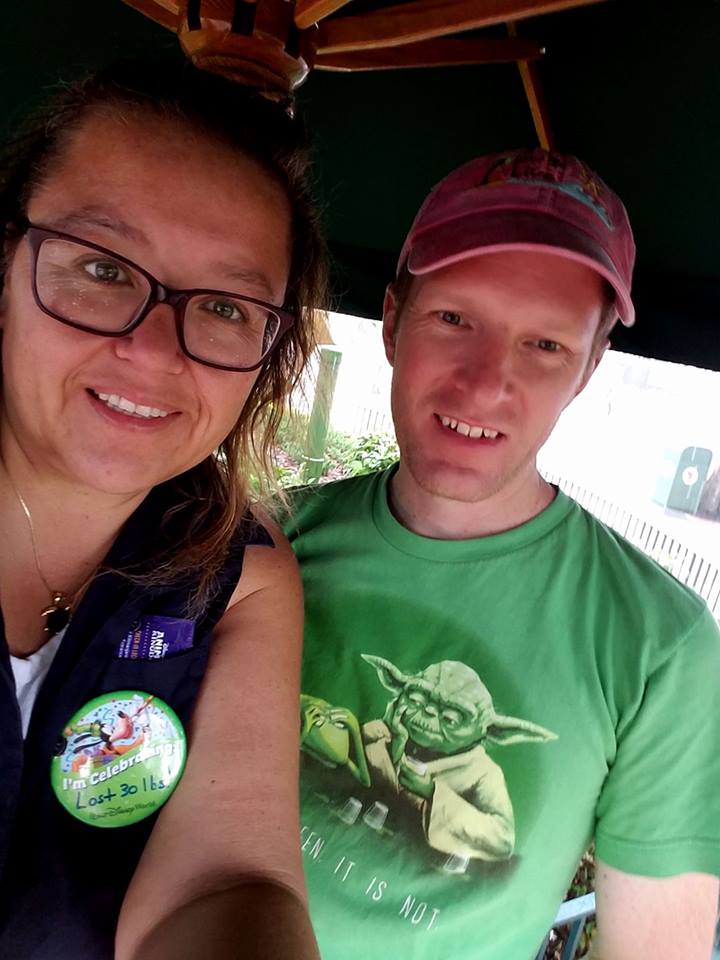 Another couple shoved themselves under our umbrella and Greg and I squished in together to make more room. As soon as we glued ourselves to each other the heavens unleashed the largest amount of water I had seen in a good, long time. People started running—bobbing and weaving to any area they thought they could avoid the deluge. Unfortunately, they were behind most people by a good three minutes and all of the good spots were taken. Some finally gave up and decided to embrace the wet (by singing and dancing in the rain) while others cursed and snarked at family members that were taking too long to keep up. Where they were going I had no idea, but they really seemed to be in a hurry to get there.

Greg and I hunkered down and congratulated ourselves on keeping dry. I took the opportunity (of course) to line up another fastpass for the Rock ‘N Roller Coaster and hoped that the rain would die off quickly. I don’t suppose you know how that went, right? It rained for quite a long time. Small puddles were turning into big puddles and it was soon apparent that we were beginning to get a little flooded around the foot of our bench. It was obvious that we weren’t going to get out of the situation completely unscathed, but it still seemed as if it would be minimal.

More running, more dancing, more water…it was almost getting to the point of being ridiculous. Greg finally pulled out his phone and found a weather app that would let us know what was what. We were looking at about ten minutes before the rain would taper down to next to nothing. I had started to get tired of standing (plus, I think was starting to get a little carbon dioxide poisoning from rebreathing my own air shoved under the umbrella like I was) so I sat as daintily as possible on the top of the bench. Which was awesome—seriously, my feet could not have been more thankful.

However, my legs started to fall asleep and then they started to ache and then they started to swell. I got to the point that I finally had no choice but to stand back up. The waiting game was really beginning to ruin my vibe. The rum and Coke was long gone and I was afraid that if I didn’t have my legs straightened out fairly quickly that Greg was going to ask me to start running towards the roller coaster and I would basically fall of the bench, face first, into the ever growing lake that was now beneath us.

A little bit of sunshine began to fight its way out of the gloom and doom and it seemed like it was only a little a lot instead of a lot a lot. My legs were finally starting to feel better and we slowly began to form a course of action. We knew that we had the fastpass to use and that I was adamant that we go on Tower of Terror one more time, so it was just a question of how we were going to start our bobbing and weaving across the park and into coveted park territory.

The sun finally broke through completely and we were ready to take the plunge (almost literally, by this time our little lake was practically the Pacific) to the other side of the park. For all the work we put into our plot it was kind of anti-climactic getting there. The streets were fairly cleared out and the rain that was still falling was drying from our clothes in record time. It wasn’t going to be long before we started feeling the full force of the sun again. We made it to the coaster and triumphantly strutted our way to the beginning of the line again. Fastpasses are amazing.

I barely even took the time to listen to Stephen Tyler and concentrated on getting another Tower of Terror fastpass. It was surprising to me that it suddenly became a difficult thing to do—apparently all of the passes were out for the day. The hell you say. I kept refreshing and refreshing My Disney Experience until one finally showed up for 8:20 that night. I snagged it, hoping that I could change the time later. I knew that we would be long gone by then and by that time was very desperate to get what I was searching for so I didn’t stop looking. It was frustrating on many levels—Greg was mad because I wasn’t enjoying the line to the coaster (whatever, dude) and the guy in front of me was mad because I stepped on his heels at least twice and I was mad because nothing was popping up. I finally gave up and put my phone away. I’m sure that the world, in general, was thrilled.

We managed to have a wonderful ride without losing any personal items! Greg was happy and I was not feeling too badly myself. Me being me, however, I grabbed my phone immediately and began trying to modify the time on my Tower fastpass. Wouldn’t you know it? Ten seconds in and I could grab a new time just ten minutes away. Hip, Hip, Hooray! Greg was happy that the dilemma was over and I was happy that I would get to go on such a beloved ride one more time. All was right in our world. Until I came up with the bright idea of trying to get Rivers of Light fastpasses for Animal Kingdom that night. Yeah. I’m surprised that Greg didn’t just ditch me.

We hightailed it to the ride and it was awesome (as usual) and it soon became time to work our way back to Animal Kingdom. But a new adventure still awaited us, even before then. When had gone to Disney Springs the previous night we had purchased the Express Transportation option for our trip. I had heard a lot about it while chatting to my fellow Disney lovers and was very intrigued on giving it a shot. We hadn’t planned on doing very much hopping between parks, but we knew that it would be an advantage to not have to keep walking back to the front of each park to catch a bus each time we wanted to leave. We hadn’t been able to use the transportation that morning, because we had (yes, had) to go to Sanaa and it wouldn’t have worked out. But at that point we were free and clear and more than ready to give it a shot.

The best thing at that very moment was that we were only seconds away from the pick-up spot. I was already privy to the bus schedule (thank you to everyone on Chat) and was able to share my indispensable knowledge to my still somewhat skeptical hubby. We were only going to have to wait about 15 minutes. Score! We walked back to the corner of the park where the coaster was and found the specific cast members we were looking for. We tapped in and grabbed a (still slightly) wet bench to cop a squat. Life didn’t suck.

As I sat on the bench, soaking in the rays of a now relentless sun I noticed that there were a ton of people milling around just beyond the slight trees that were blocking what seemed to be a large parking lot. And it wasn’t just ordinary people like Greg and I. It was Pinocchio, and Geppetto, and the Evil Queen from Cinderella (I think), and Pluto, and on and on and on. Just standing around with their cast members, waiting to meet anyone that would dare come behind the trees to visit. I had heard that such a time and place existed at the Studios, but I had never actually seen it for myself. I kind of had the urge to run back into the crowd and let everyone know, but then I decided to just keep sitting on my bench and soak up the specialness like the VIP I was. The fact is: VIP is awesome, even when I have to pay for it.

The transportation cast members finally began to signal that it was our time to hop on the bus and I practically squealed with excitement. We were doing something that we had never done before and we were both (one slightly more than the other) very excited to see where it would lead us. We walked behind the Tower into what looked like a staff parking lot, and onto our bus. And when I say our bus, it was just our bus. A bus for two? You bet! There was so much room that we opted not to even sit next to each other! It was fantastic! We looked at the driver, he looked at us, I looked at Greg, he looked out the window, and then I looked at my phone. I was going to get that freaking Rivers of Life fastpass if it was the last thing I did…

To be continued very soon! I like to talk a lot, so if you want to read any other stories (not Disney related) feel free to visit: afunnythinghappenedwheniwaslearningmyself.com. Yes, I am verbose. Very. Enjoy!

Thanks for another installment! So cool that you stumbled upon Character Palooza!

Thank you for the installment! And yay to your Celebration Button!!!

It was so cool. Hardly any people there!

Thank you. The trip ro Disney was my reward for hitting that goal!

Loving it! I felt like I was right there with you. I need to know more about this hidden character interaction with Pinocchio! Off i go to research!

Character Palooza is what it’s called. It was pretty cool!

Thanks for the latest instalment!

I have not heard of this…I must look for it.

So much fun reading your posts! Thanks

Thanks for your report - such fun to read. I can’t wait to use that app in the parks.

Love all the reports!