Is that bread wrapped thing the hotdog? If so I think my son would love that. Finding places that he will actually eat something was a challenge for me. Another great installment!

Yes! Kind of like a large pig in a blanket, although the wrap is more like a warm, soft croissant than the usual wrappy pastry.

The chips that came with it were very good too - very similar to Terra chips (if they aren’t actually them.)

When we bought the multiple dogs for dinner we were given a ton of the nice cold grapes and we had many left over, so I went over to the soda station and half filled a ziploc with ice, then saved the grapes in there for later. Kept my back nice and cool too, for awhile.

I just love all the details in your report! Everyone should read this if they want to RD for Pandora

The pictures are great too!

Really enjoyed your AK trip report. I have to questions I hope you might offer your advice for.

First, I read somewhere (can’t recall the sources now, unfortunately) that AK parking lot often opens later than when they allow buses through. Were you stuck at the enterance at all? Do you feel the time you saved by driving yourself (including the walk from the parking lot) was valuable, a waste, or a toss-up?

Then, regarding RD on an EMH day: we do not need to visit Pandora at rope drop. We want to head straight to Africa. I assume I will still need to arrive near 7:20, as you did just to get through The Oasis. Do you recall glimpsing back? I am just curious if you saw hoards coming in behind you as well. Also, once you are through The Oasis, do you know where/how they split the line for those headed to other parts of the park?

When we arrived at the AK parking lot it was literally a drive right through. There were CMs over in the lot actively directing cars into spots as usual.

I can’t say this is true all the time since we haven’t done it too much, but We’ve found when you get to a park parking lot very early there is nothing restricting you from going in. Last trip we got to EP very early for an ADR and there was no one at the lot entrance or in the lot itself. We got the 2nd parking spot!

As for non-Pandora RD I think others might have better answers in general as we’ve only been to AK for that Pandora march. But, I think that after the tapstiles they made everyone go left. I’d assume that anyone going to other parts of the park was stuck in the traffic until the bridge leading to the Tree of Life.

It was certainly a horde situation behind us at security and tapstiles - every minute brings more peoples. But, I suspect if one times it right and arrives closer to actual open or at least after the initial rush that you could avoid getting stuck in the controlled march after dealing with getting through security and just head straight to your destination.

Other parts of the park were still fairly empty after our FoP ride.

Right now I think if I were planning to head to EE or somewhere, I would probably still get there early and just deal with the initial march than have to wait on a potentially snaking security line later. (But I get everywhere early.)

(But I get everywhere early.)

Haha! So does my husband! You answered just what I wanted to confirm - better to get there early and just “deal” until we can break off rather than chance missing good ride time by being caught up in the never-ceasing influx of guests. Thanks so much!

Trying to finally get back to complete my report… So, if it is Tuesday it must be EPCOT.

The night before we stayed at the CBR pool until around 9:30PM. I was up early and out getting coffee and milk at the main food area by about 7:45AM. Everyone did their thing nice and quickly and we were out of the room and in the truck by 8:20AM for a 9AM open.

Even though we were a good 15 rows back in the parking lot, didn’t feel like too many people walking with us. We were at security by about 8:35, had a nice talky security guard, asked where we were from and then if I ever saw Trump in Manhattan. We were out and reassembling the baggage by 8:47 according to this photo. 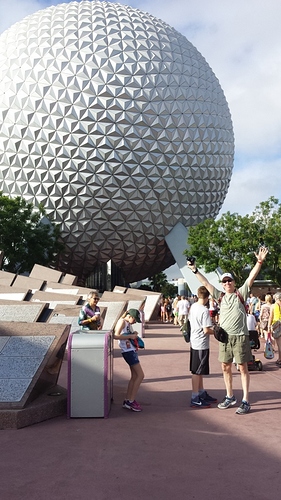 The first post in this thread covers the RD wait and a little open-path tip, so I will not go back into those details again.
We had a fistful of FPP: 9:15AM Test Track, 10:15 Spaceship Earth, 11:15 Character meet. We headed to Soarin’ as the rope dropped and was a nice easy walk compared to the Pandemonium at AK the day before. Posted wait time was 10, we stopped in the long hallway and were standing near a gate by 9:05AM.

It was our first ride on the new Soarin and without even asking we were in B1 - we all loved it. I think my favorite part of Soarin is that our DD10, who can be afraid of heights and such just enjoys it so much - plus it deflates all of DS14’s typical teenage blustering and we all walk off with huge smiles on our face.

As we stepped back into the main area we all instinctively peeked at the wait time - only 15 minutes! Zoom… back into the queue for a wonderful 2nd ride. This time we sat off to the left side of the screen and did notice the distortion that people have mentioned due to the curvature of the screen. I didn’t really mind, since, you know WE WERE FLYING but my engineer-y mind made me wonder how they could minimize that a bit more. (Hint: I got nothing.)

We exited with as much enthusiasm as our first ride and made a pit stop at the rest rooms. As we waited, DW and I noticed something: Sunshine Seasons carries Rocky Mountain Caramel Corn - nut free! We sneakily bought a few bags before the kids could notice and parked them in my pack.

We wandered the building a minute and got some family photos. 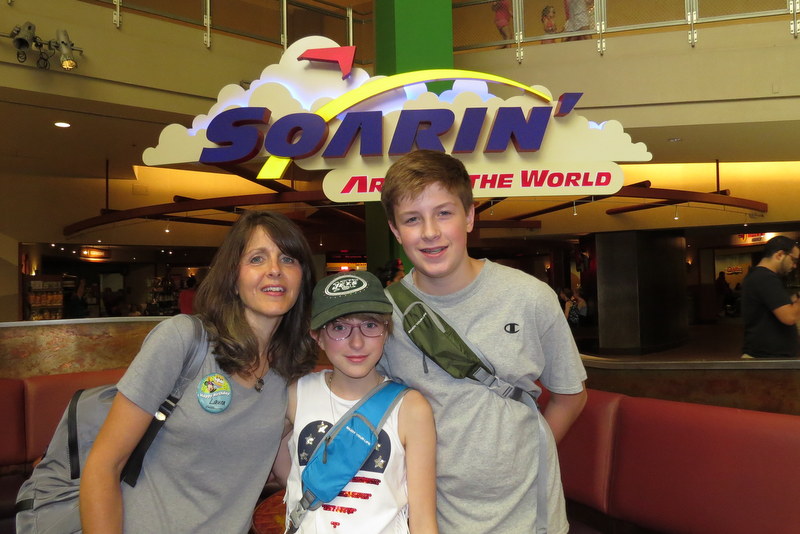 DW got a really nice photo last time of the balloons that she has used for phone wallpaper, and we stopped to see if we could get any other interesting ones with all the nice colors and theming.

As a guy born in 1964, I just missed the NY World’s Fair (except being carried there before I was born by dear mother), but I did have the opportunity to see family photos, plus visit the things that remained open in early 1970’s Flushing Meadow Park - this building always makes me think of the design from that World’s Fair. 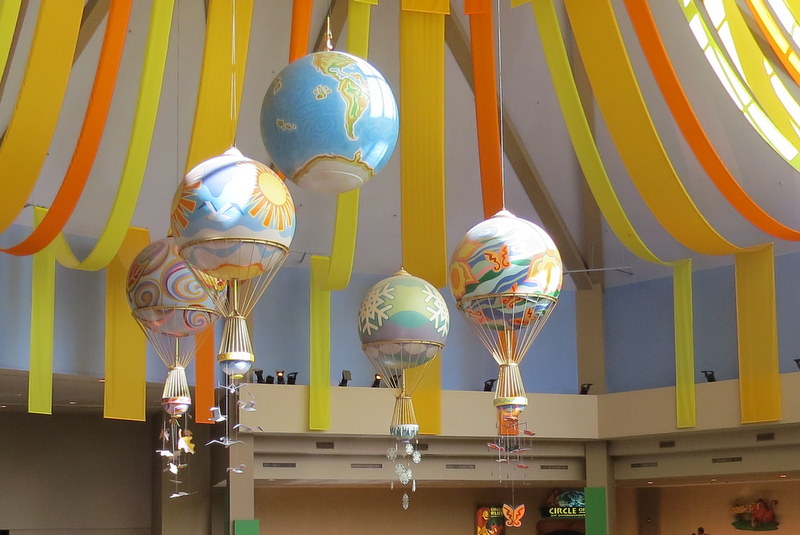 Moving on, we walked over towards Test Track with both DW and I excited we had hidden caramel corn. Our kids don’t often get the chance to have certain treats, the many food and treat opportunities for them is a big part of our love for visiting Disney.

On the way to TT, we once again wondered what the deal with the smell over by Innoventions West and just powered through.

As we we passed the fountain, we saw Professor Honeydew and Beaker cruising through by the fountain, watched them a bit and then off for TT. My theory for Test Track this trip was to book an early FPP since it is often reported down first thing in the morning. I figured if it went down I’d have an anytime FPP to run with later and we could try to head over to FEA. If it was online we would ride - win win.

In any case - TT was up and we had a great run. 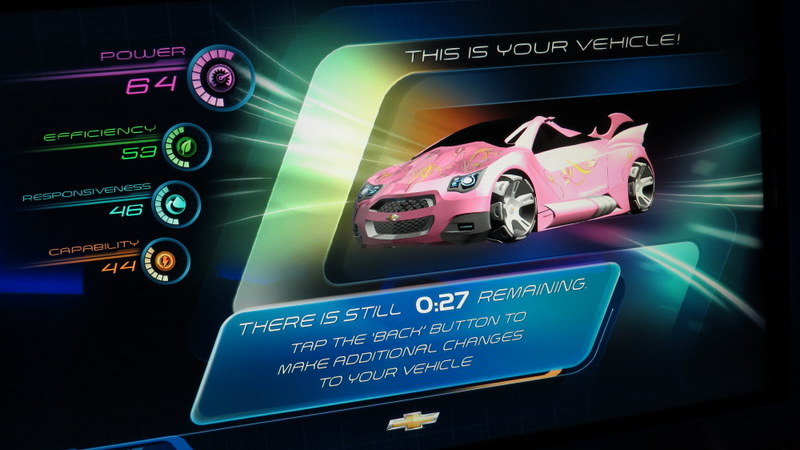 I also got a shot of DD10 with her future car… 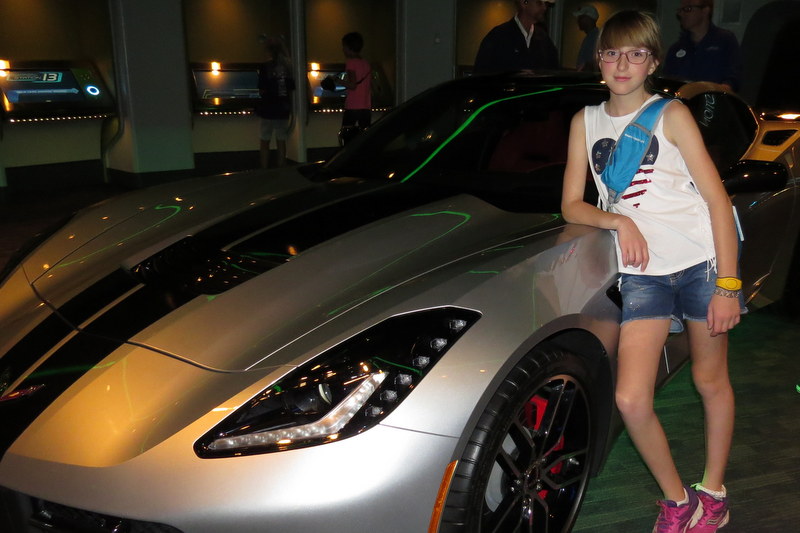 Since we were in the neighborhood and had time before our SE FPP, we headed over to what I suspected was our last ride over of Ellen’s Energy Adventure. I had everyone line up in the same spot we took our 2014 photo on our first EPCOT visit. What a change. 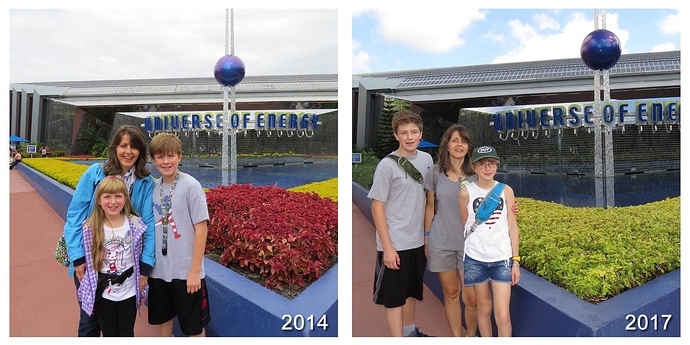 We enjoyed the ride again, but it is a long time commitment. So long Stupid Judy. As we serpentined back towards SE, the pull of the pin store began to weigh heavy upon my family. I made a mental note of a pin or two I liked and took some photos of the structures in the area… 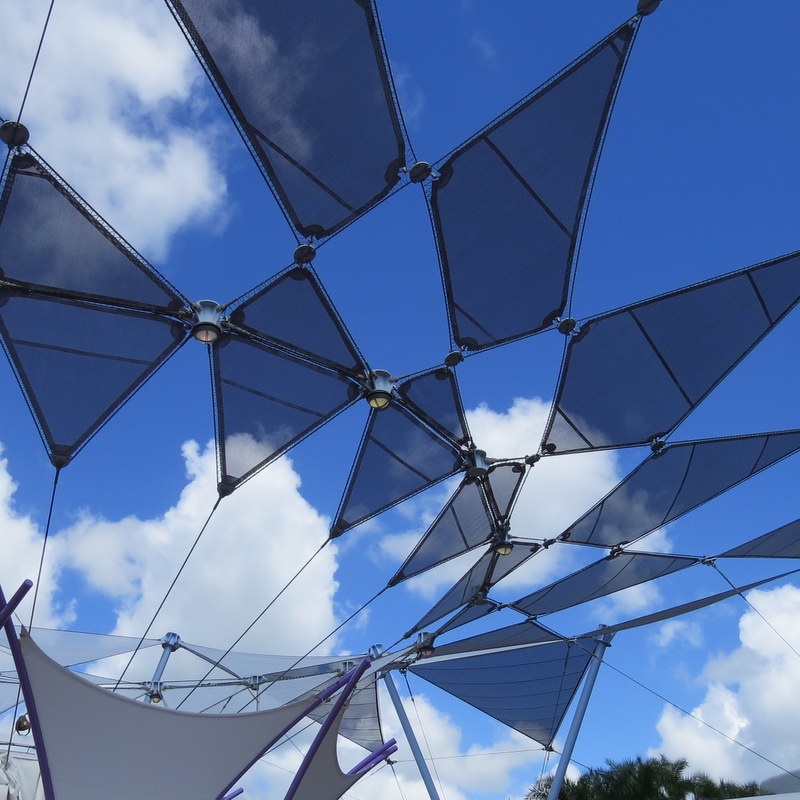 But I soon realized we were coming up to the end of our SE FPP window. My family can be pin-crazy so I began to prod them (verbally, not with pins) toward the big sphere. We made it into the FPP line without about 5 minutes to spare in the extra time window. 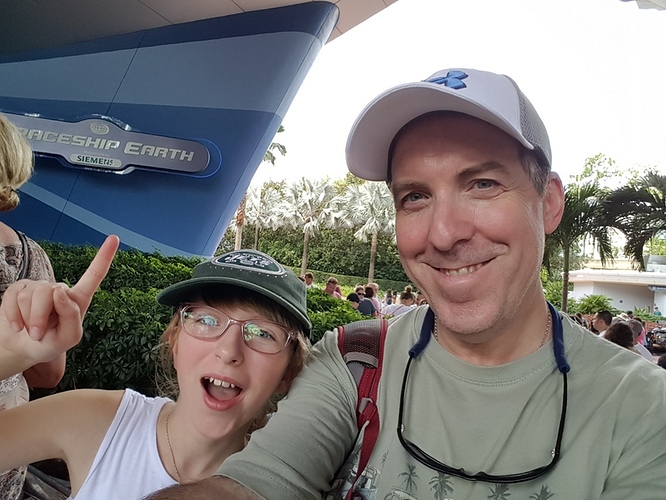 We always look forward to Spaceship Earth. I got a good shot of my Irish cousin Kieran still taking a break. 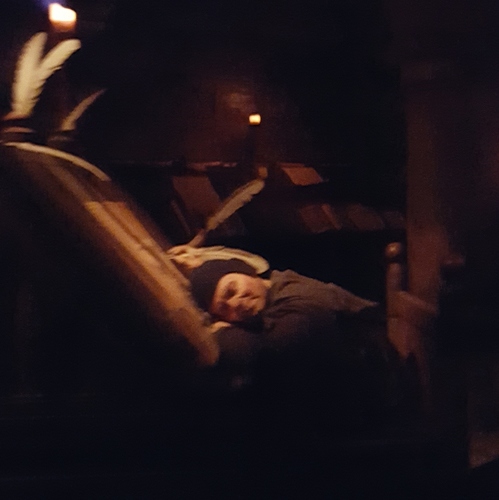 This time as we left the ride we quickly emailed ourselves our future selves and bypassed the other attractions. Slighty behind in the plan and hunger starting to kick in we broke into the caramel popcorn - and any teetering hangry was staved off for later use.

The FPP line for the Character meet was fairly short and we were next in line before we knew it. Our DD10 had her book ready, but we noticed that she has become a bit more self-conscious than last trip with characters, which I found made me a little sad. We got some great photos, and my DS14 still loves that Minnie tends to fawn over him. 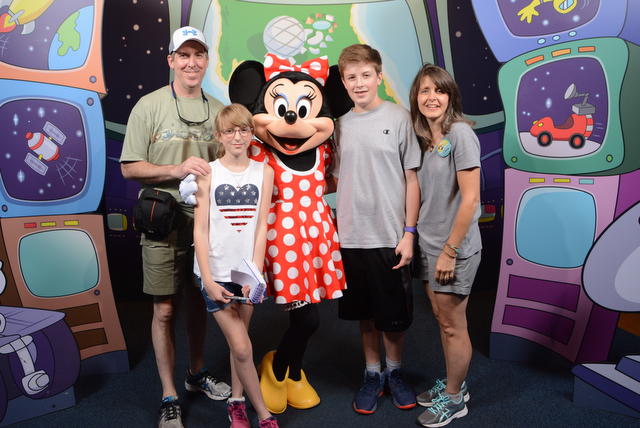 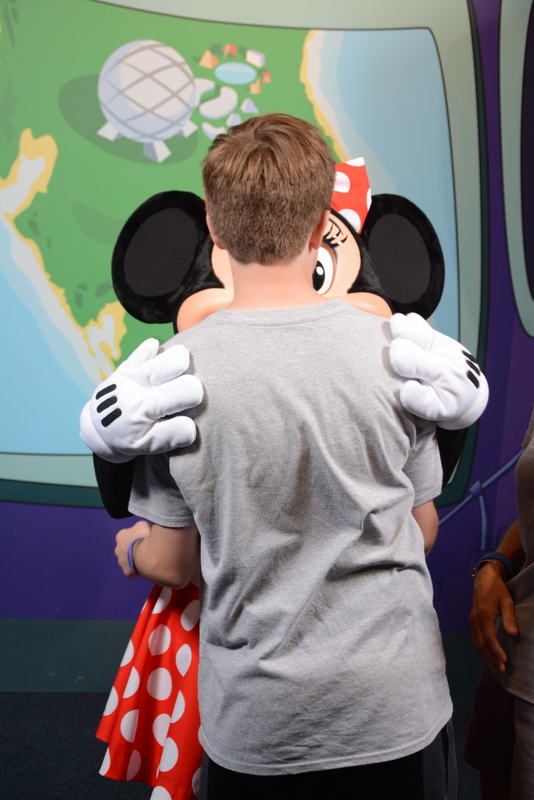 Something about Minnie also makes my DW a little verklempt. After our family photo with her, Minnie noticed DW was tearing up and she came over and gave her a great big hug. It was so nice and we all began tearing up.

As we headed out in the sparkling sun, we aimed for World Showcase with some lunch in mind. Our plan was for DS14 and I to stop and get some fish and chips to go (and a Bass ale for me!) and then we’d meet the girls at American Adventure where they could look for food that DD10 would enjoy more.

We stopped at a photopass photographer, and then I stopped at one of my favorite photo spots for and we enjoyed some wander time on the long walk over. 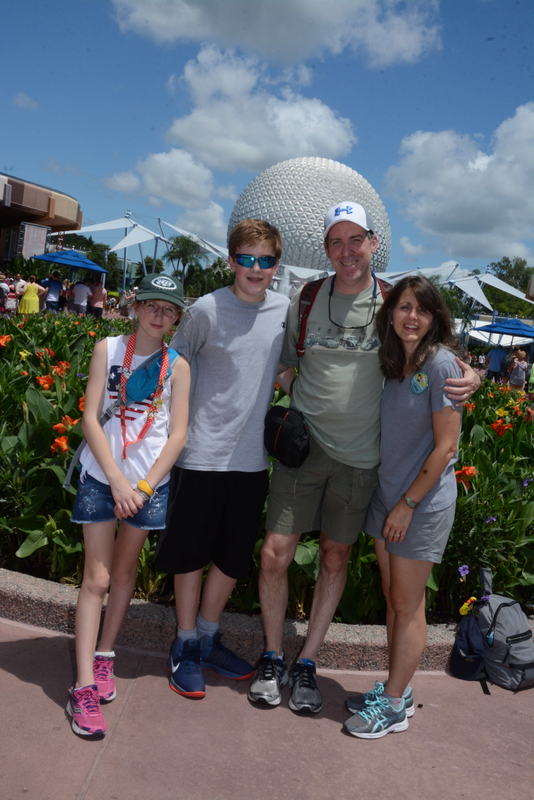 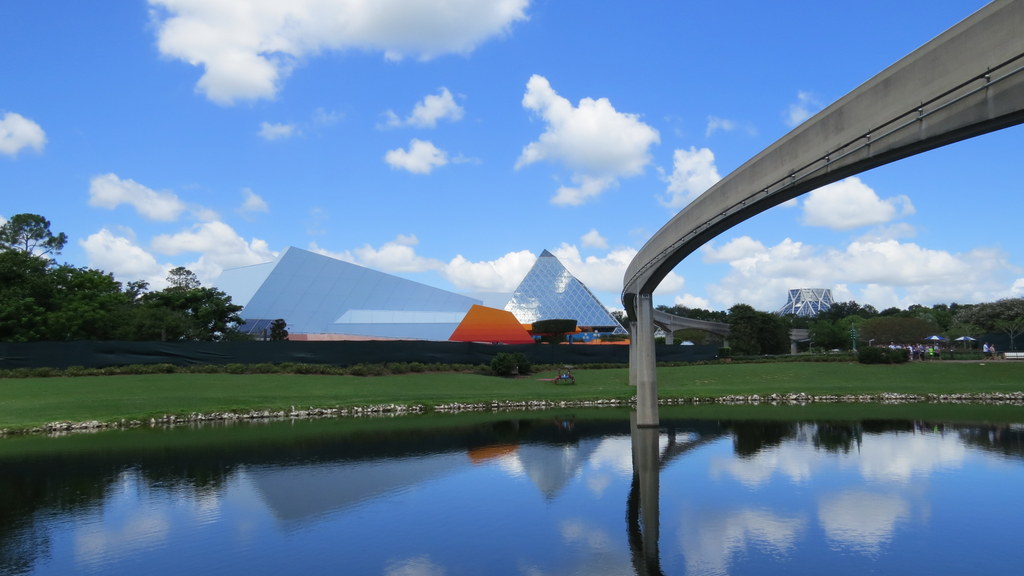 Lots of people went right on the ropedrop day we did at AK in July. It was an EMH day and only Hotel guests were allowed to go left to Pandora world. The rest were sent to the right of the park and there were lots of them.

The guests going left had to show Hotel passes once in the park to be allowed to head left to pandoras world. There was another queue there as a result.

You do need to still arrive very early just to get through security to get in the park as they don’t differentiate between hotel guests and other guests until you are in the park. There were four of five huge queues for security

I could not believe how many Hotel guests there could be

OK, A year ago RIGHT THIS SECOND my family and I were driving down to Miami to see my Mom for her 90th birthday, then back up to Orlando for our Disney vacation.

Sending my family some photos from the trip, I happened upon this one: We stopped for gas somewhere in South Carolina. I am still slightly suspicious about this ATM. 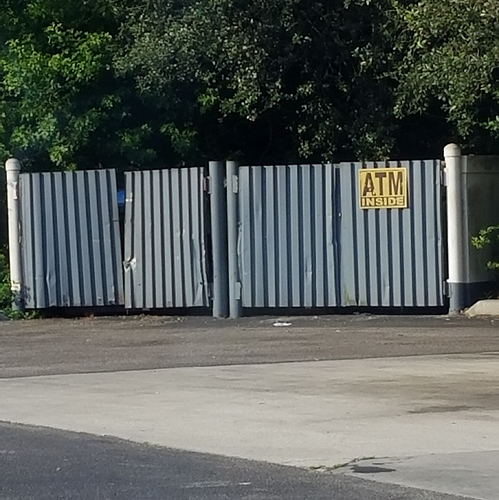 Nice report! You probably figured out why people were on the left side at Animal Kingdom…that is the direction to Pandora.