I love a good trip report and have done several of my own. It’s nice to look back on the trip and see what went well and what I would do differently in the future.

DH and I just got back yesterday from a “just us” trip to the World, our first such type visit since we were in our 20s (a few years ago…). It was an early Anniversary Trip; we celebrate 15 years on 11/11. We were keeping to a tighter budget for the trip package itself so we opted for Pop Century, 4 nights, Free QS Dining, and 3-day park hopper passes.

We did a TS splurge on Brunch At the Top for Sunday morning, which was the thing I was most looking forward to. We also made a point to enjoy some of the lounges since we were without kids. And we had our first ever taste of touring in the rain.

Pull down on the lap bar and secure all personal belongings. Then, sit back and relax! This trip report will begin shortly!

Love a trip report…all ready to go here…just waiting for the ride to start.

I am looking forward to this!

We arrived to MHT about 75 minutes prior to takeoff; our airport is pretty tiny and getting through TSA usually happens before you can blink, except in the very early morning hours when the airport is just opening. We had an on-time departure but had been warned on check-in that “everything between here and there is weather advised.” We had been watching the weather closely due to the storm Hermine impacting the east coast, but with a non-stop flight we had little concern that we would get to the MCO provided an aircraft could get to us. As it turned out our flight was in fact on-time and although we had a bit of turbulence it was not the worst flight I’ve ever had.

We touched down at 5:40 pm under cloudy skies. 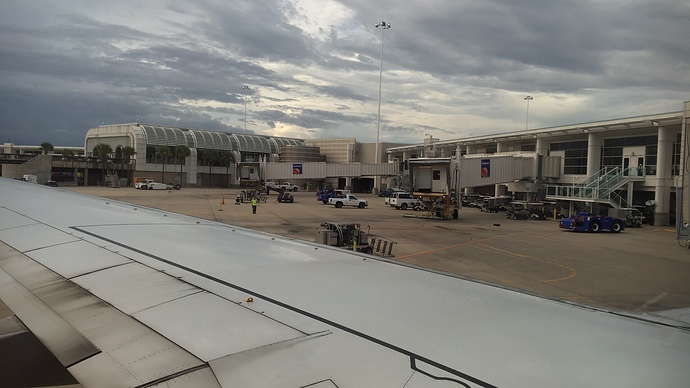 We opted to collect our own suitcase (yes, just the one - traveling without kids is sooooooooo easy!!) rather than use the luggage service because it was later in the day. The luggage came off the conveyor in short order and we headed to DME. To our pleasure, the bus was nearly full when we arrived, and we left just a few minutes after we boarded. I was concerned that we might hit rush hour traffic, but there wasn’t any. We dropped off at AoA at 6:50pm and arrived at Pop just a few short minutes later.

While in flight we had received our “room ready” text, having been given room 8103. As this was an anniversary trip with no kids, our one and only request for a room was a king bed. I stressed this in the fax and said that it didn’t matter where we were in the resort if if meant we could have a king bed. While en route I cross checked this room number with the touringplans room finder and was disappointed to see the room had double beds: Pop Century Room 8103 Oh well - we realized that booking value meant we might not get a king bed and we decided to make the best of it. We exited the bus and made the loooooooooooooooooooooooooooooooooooooooong walk to 8103, which is about as far from Classic Hall as you can get, and were pleasantly surprised to see we did in fact have a king bed. @len may want to update the room description to reflect this.

Though the value rooms are indeed quite small as compared to deluxe rooms, having a king versus two double beds made the room feel much more spacious. The room was clean, smelled fresh, and was stocked with plenty of towels. The single armoire had just 3 drawers which was fine for the two of us, but larger families would struggle with storage space for sure. The minifridge was cold. No coffee maker here, but there was both a hair dryer as well as an iron and ironing board.

We dropped off our stuff and took a moment to call Disney Dining. Before leaving the ground at MHT we had read on chat that the ovens at Sanaa were broken so no bread service! WHAT?! Our reservation was made entirely with bread service in mind, so it was important to us to know whether this was the case before heading over; we would go to Disney Springs as an alternative. We were quite happy to learn that the ovens were fully functional and we headed over to AKL, using Disney Transportation to do so.

We got off at Jambo as we were early for our reservation and we wanted to visit our Home. Stepping into the lobby of AKL just never gets old and one can feel the stress melt away upon entry. We did some shopping at the Zawadi Marketplace and then headed down to the lounge at Jiko to have a pre-dinner drink. We sat at the bar for close to 10 minutes with nobody approaching to offer us service; quite a disappoinment. We decided to head up to the Victoria Falls lounge instead where we were greeted warmly and our order taken immediately. Not sure what happened at Jiko. We enjoyed a flight of red African wines. All were quite good, but my favorite was the Kanonkop Kadette: 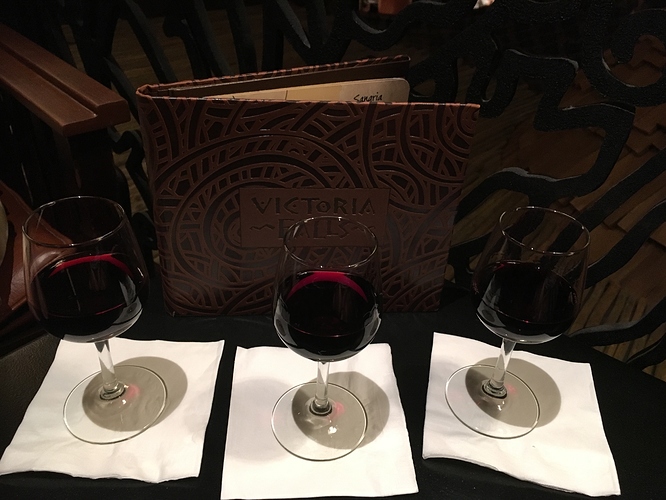 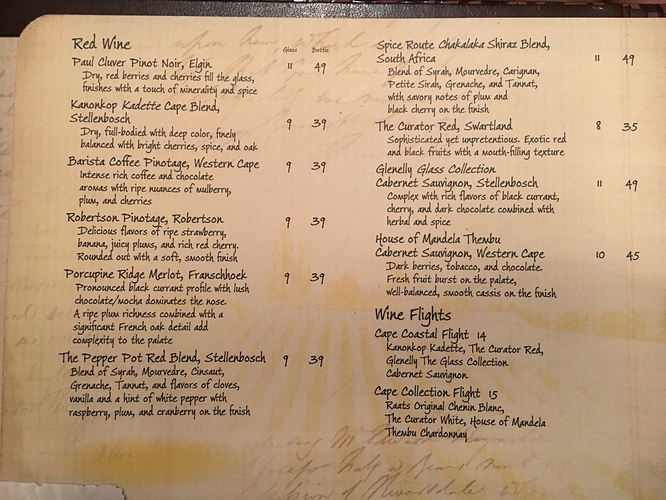 Soon it was time to head to Kidani for our reservation. The walk over was quite nice - the air was comfortable and it was quiet along the way. We were greeted by name at Sanaa (how do they do that?!) and led to our table promptly. Our server came right away to take our drink order; I had a glass of Spice Route Chakalaka, a Syrah from Swartland, South Africa which was very yummy! DH had a sprite

We decided that we would enjoy the full bread service - all 5 breads and all 9 accompaniments - and dessert for our dinner. This turned out to be a perfect decision and we left comfortably full; entrees would have resulted in being overly full. 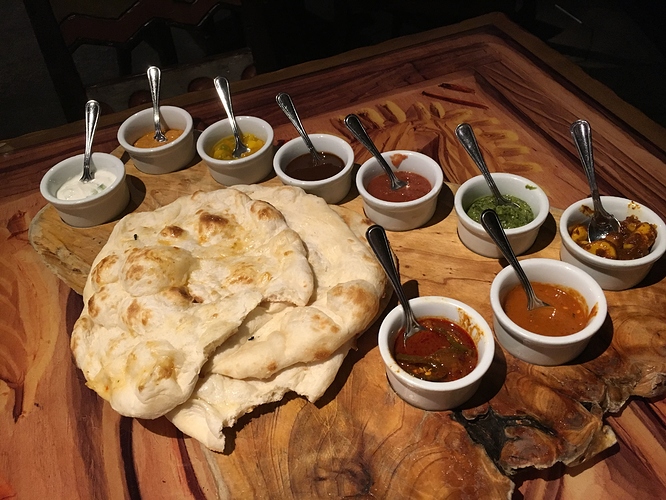 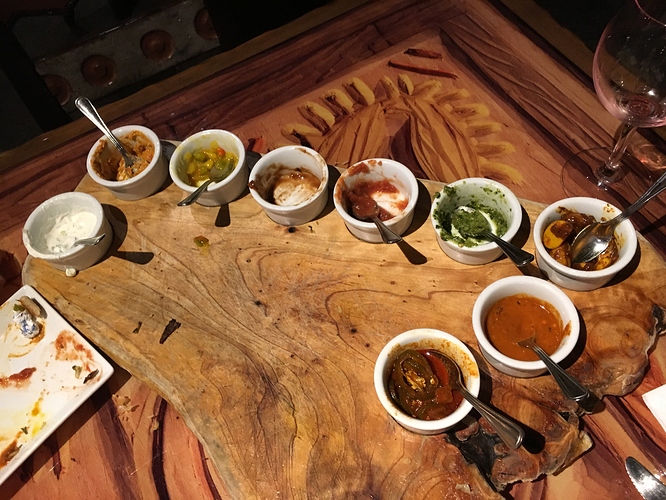 Our favorite accompaniments were the red pepper hummus, tomato-date jam, tamarind chutney (which I dream about and have tried unsuccessfully to find close to home), and coriander chutney.

For dessert, I had the Afrika Povu, which according to the WDW menu page is “Tanzanian Chocolate Mousse, Madagascar Vanilla Rum Caramel, Kenyan Coffee, and Kalahari Desert Salt”: 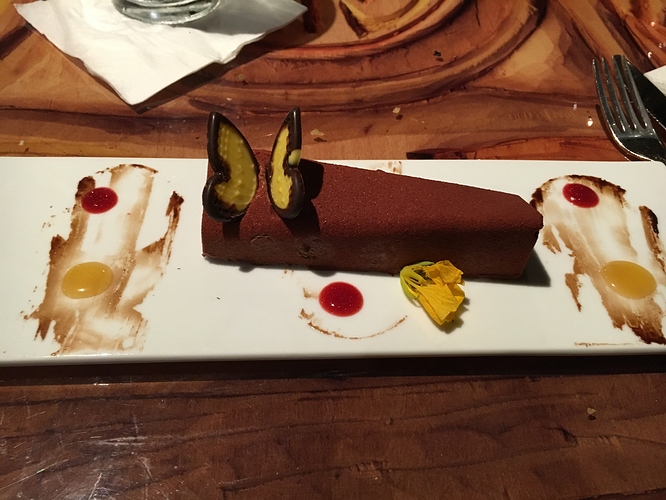 and DH had Ceylon-spiced Cheesecake (which is basically a cinnamon flavor): 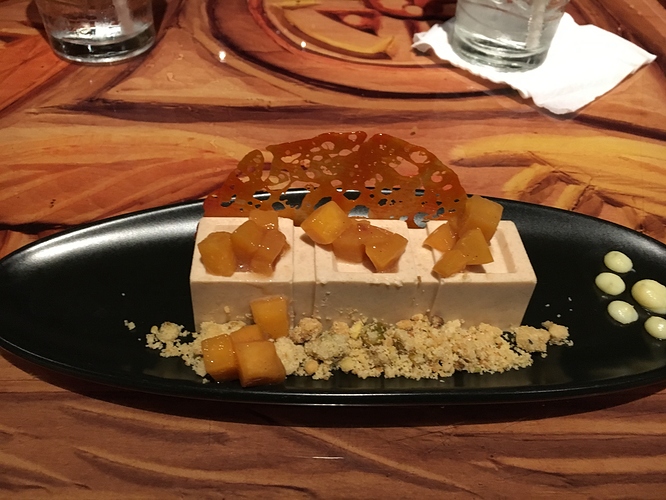 Both were sooo delicious!!

Comfortably full and so happy to be in the bubble alone together, we headed back to Pop and made the looooooooooooooooooooooooooooong trek back to our room (are you picking up what I’m putting down here???) where we settled in for a good night’s sleep before our first day of touring!

An awesome start to the trip.

Great start! I think so many people use the bar area at Jiko just for a seat while waiting for their table that sometimes they ignore paying customers!

Yay! I’m so happy you are doing a trip report! Those desserts look amazing! Can’t wait for more!!! Don’t take too looooooooooooooooong to write the next installment, okay?

Thanks for the detail! We are taking that exact same flight out of MHT in two weeks and I’m glad to know we can expect to be at the hotel somewhere around 7!

Love trip reports and can’t wait for the rest! So glad you spoke about the bread service, with accompanying photo, I’ve heard so much about it but never experienced it myself. Kept thinking, it’s just bread…right? Will have to put on our (extra long (like your walk!)) list

See! This is my biggest complaints about values and mods… they are so spread out. Even being in the 70’s building it was still way more hassle than it was worth to walk down just to fill up our mugs. The Deluxe resorts are so much easier with everything being in one building… even though being at the end of the hall in Jambo is still a pretty loooooong trek lol.

Well that and the beds… You’re so lucky you got a king lol.

What an awesome way to start your stay! I can’t wait to read more!

We were awakened early Saturday morning by the sound of our neighbors talking and laughing. They were in no way being exceptionally loud or disruptive, just carrying on normal conversation at a normal volume. And so we became aware of just how thin the walls are at Pop. It wasn’t any help that our room happened to be an adjoining room, I’m sure. Another strike against this resort

Still, we wanted to be up early-ish to make RD at HS so awakened as we were we began our morning.

Arrived at bus stop at 8:08 (remember - looooooooooong walk!!) boarded a bus at 8:10, and were at HS, through bag check and waiting for RD at 0833. Not bad at all! They began letting people through the tapstiles at 0838, allowing us as far as the corner of Hollywood and Sunset where the crowd was held until park opening. The Trolley Car Cafe (STARBUCKS) was open so we ducked in to grab some breakfast (breakfast sandwich for me, croissant for him, coffee and water) while we waited. We were through the line in no time and snagged a table on the terrace to enjoy. When the “rope was dropped” we gathered our things and headed directly to ToT. There was again another small wait as the ride was not open yet, but within 10 minutes we were on board. Both of us remember the ride being so much longer than it was - the story part of it - but the ride in the tower itself was the best I’ve ever experienced. We went up and down sooooooooooooo many times!! It was good to the last drop

We headed to RnR next. On each of our previous trips, kids in tow, we have done rider switch for this ride. For some reason, DH always went first. And for some reason, we forgot to have me ride every. single. time. So this was my virgin trip with Aerosmith! DH decided to sit it out so I went single rider, and had essentially zero wait. What a fantastic ride! Love it!

Next up was TSMM. We did not have FPP for any of these rides as we had saved them for the EP part of our day. This was wise. We didn’t wait long at all for TSMM: per time stamps on photos I took, we were entering the queue at 0951 and boarding the ride at 0958! Not too shabby! 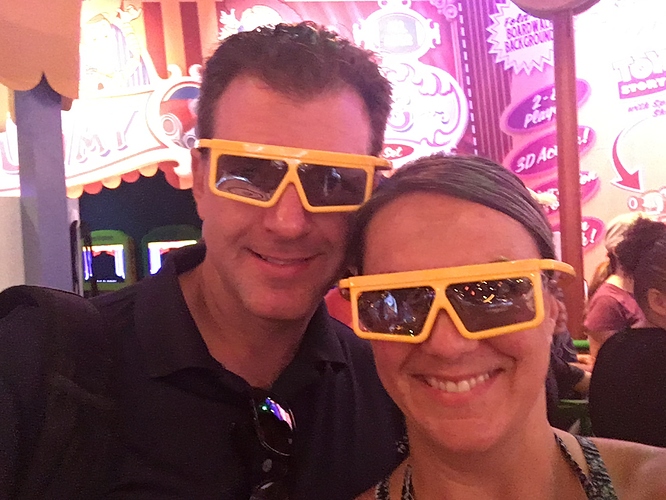 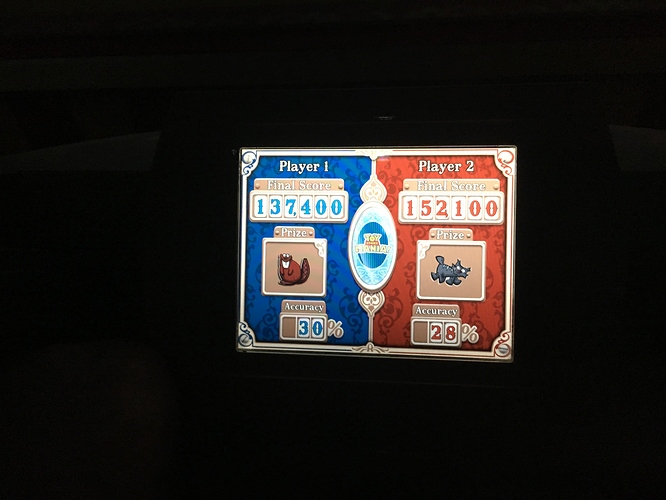 From here we headed to Launch Bay. We were pretty excited that within an hour of park opening we had done the three major rides! But DH was looking forward to meeting some SW stars, and off we went. We encountered this parade of storm troopers: 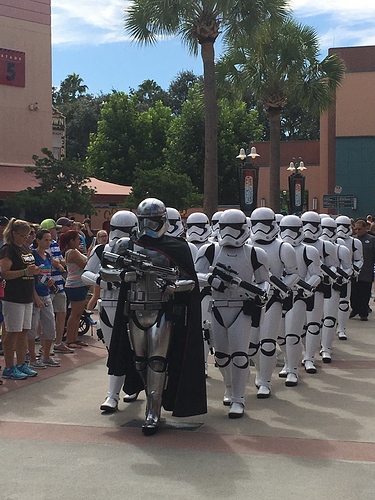 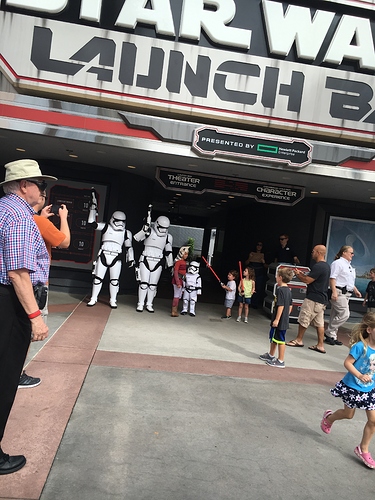 We met Chewy, Kylo Ren (dude is CREEPY!), and attempted a trade with the Jawas 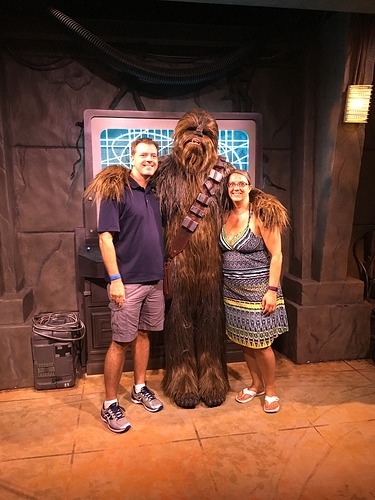 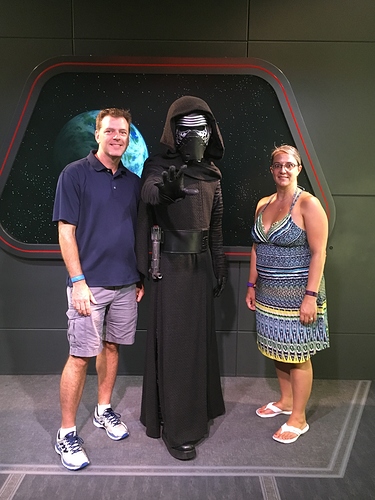 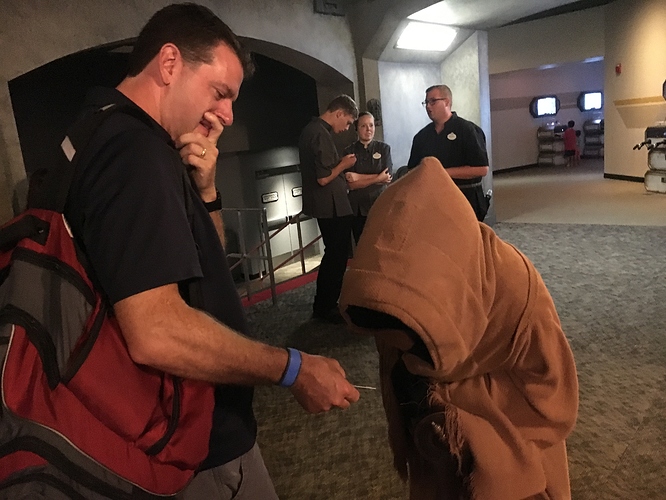 The little storm trooper is so cute!