Hi to all. I thought I would get a few things in about this trip. There will be pictures in our report along with our thoughts.

Many things have happened and its only the 2nd day we have been here and first day in the parks - MK, that was today.

We got up at 5:am on 3/8 and my Andrea went to work at the school and I had to do some running around to take care of some things before we left. Fast forward to later that day, Andrea gets off work, comes home, we finish getting things ready and get the car packed up. We live in the middle of Kansas and had to drive to Denver for our flight. We got a late start and ended up getting at the airport just before 1:00am on 3/9. Our Southwest flight was scheduled to leave at 5:00am, we got thru the check in and TSA and headed to the gate, this took about 30 minutes. Flight was sold out and no open seats so sleeping on the plan was not going to happen much. We arrived at MCO and proceeded to Disney Magical Express. We scanned our bands and were directed to the line. We stood in this line for about 15 minutes. We stayed at All Star Movies and the bus was going to stop at all 3 All Star resorts, with ours being the 3rd.
We tried online checking and, well our room wasn’t ready. Our room category is a Preferred room, and had requested a king as we only need the one bed. Well, we went to find out was there anything they could do to get us checked into a room so that we could at least get cleaned up for our 5:30pm reservations at V&A Chef’s Table. After the CM was on the phone for about 30 minutes, finally we were told that there was a Queen room that was that was refurbished. I looked at my wife and she said take it so I took it. We took it and opted out of the housekeeping.
While Andrea was talking a shower, I called the spas and was able to get Andrea an appointment to get here hair washed, died and styled for 2pm but that would mean no nape before the 530pm reservation at V&A. She used a Lyft to get there and loved who they took care of her. I took a shower and got ready and took a Lyft there. We walked around GF and took it in. Oh, I also had to buy a Monster Energy drink before we went upstairs. We both were tired as by this time it has been. Finally we went upstairs about 5:10pm and ended up relaxing right outside at the tables and chairs. Lana from V&A came out, verified some information adn let us know what was going on. At 5:30pm, she came back out and we were led inside. This is where I will stop for right now, as I am tired, however I am including some pictures, which include the menu that we were presented at V&A Chef’s Table. 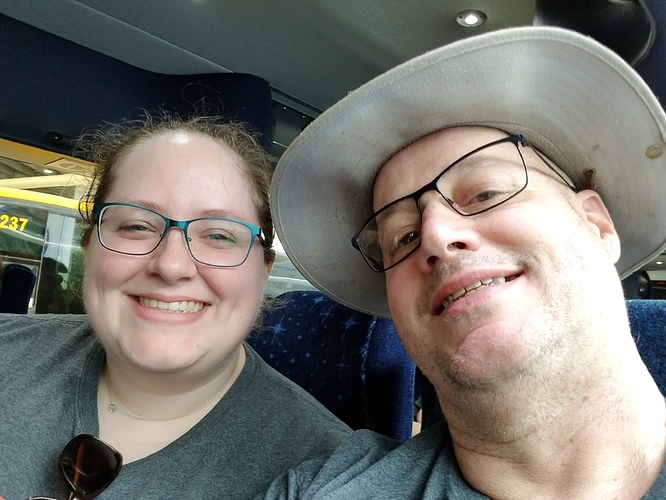 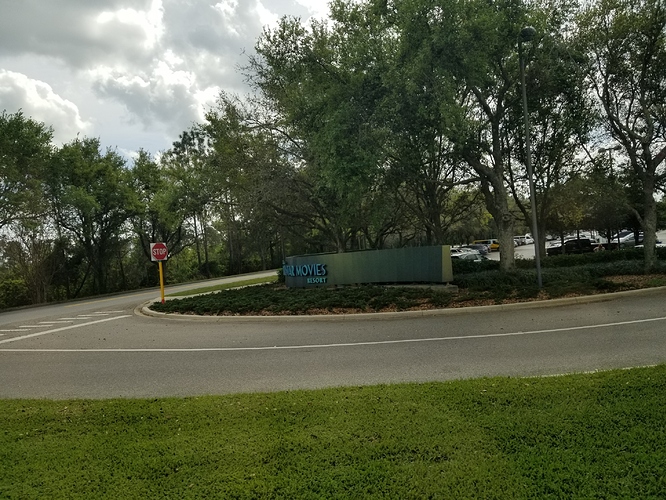 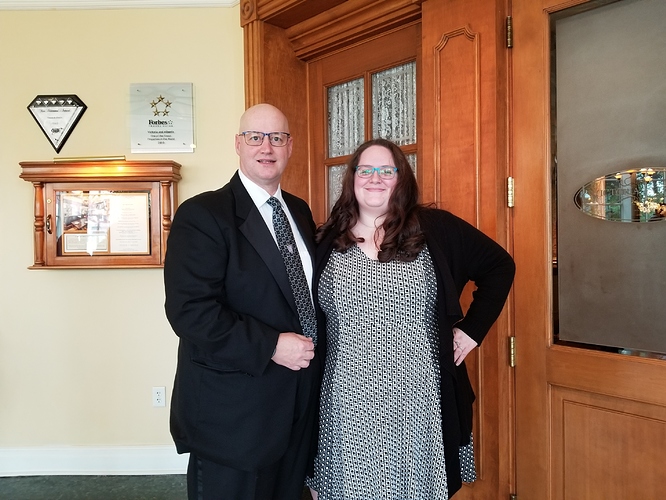 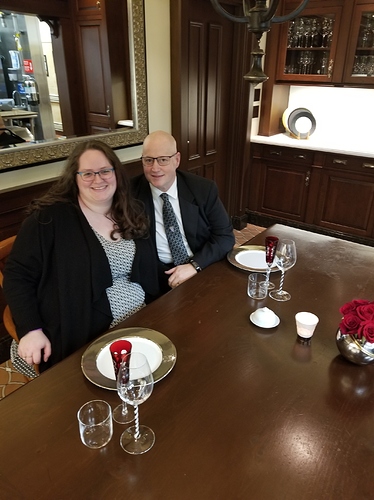 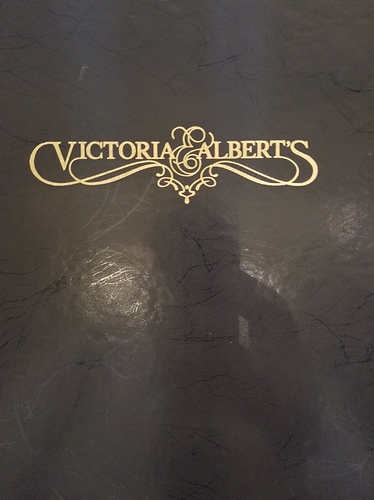 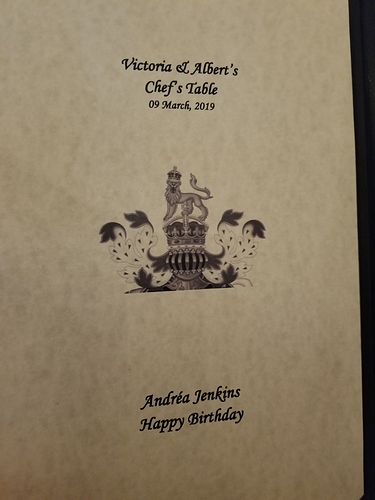 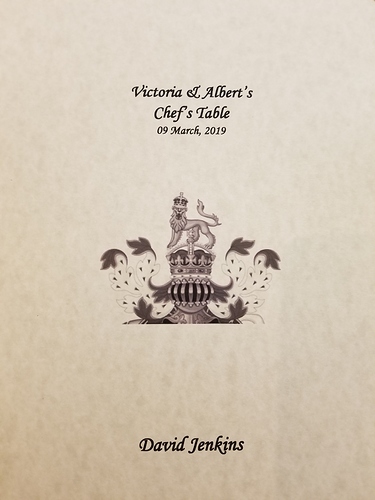 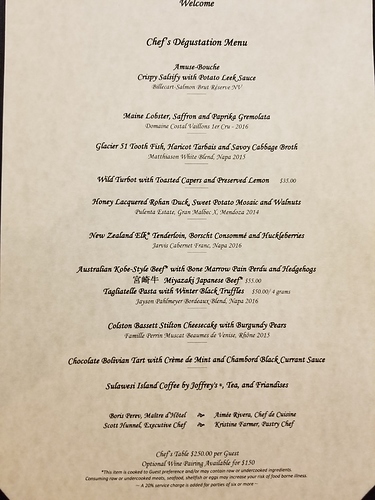 Hope you are looking forward to the rest of this meal at the Chef’s table at V&A, along with our other days. (Teaser, we have EMM for MK Fantasyland and EMM for HS TSL and lets just say that there was a big surprise for us for the EMM at Fantasyland on 3/10 but you will have to wait)

I look forward to doing this report.

A great start to your report. Andrea’s hair looks beautiful. I love reading menus so thank you for sharing. Looking forward to reading about your feast. Happy birthday Andrea.

Oh my! You two look amazing! Thank you! I look forward to following your report!

Love the report! Great idea to go the salon—. Beautuful!! Can’t wait to read along!

They could be asleep in their pudding as we type.

. My DD once fell asleep in a restaurant. Luckily the waiter noticed and caught her head, just before her face landed in her bowl of pasta.

That’s awesome–good waiter! how nice to be able to just fall asleep when you need to sleep–the joys of youth

I have sleep apnea (I think I spelled it right) I would fall asleep driving, sitting down to watch TV and even standing at work. Now that I have a Cpap machine I don’t just fall asleep. I can drive from NJ to FL over night and not nod. If I feel tired I will pull over and plug my machine in and take a 20 - 30 min nap and be good to go.

An update, while we are on the trip.
3/9 - The V&A was wonderful, amazing, incredible.
3/10 - MK for the day. EMM and then the rest of the park was the plan, well let us just say that the long hours of being up, the early EMM and the time change caused that to not happen. We overslept. We did everything we could to get there but things just didn’t work in our favor for this. In other words, we missed the EMM. We did go to the guest service and that wasn’t much help We had lunch at BOG, some snacks and dinner was at Cassy.

3/11 - AK - We did get up early and were up near the front as far as getting in the park, however we were not going to Pandora. I took a picture facing towards where the CM was holding the sign and than towards where we were heading (KMS) We went to the bridge and waited and waited, then we headed towards KS. We were up near the front of this group of people, however things didn’t work out well, as there were issues with a bridge and animals. Looking at the Disney App, saw the times grow up to 75 minutes, and than it was temporary closed. we finally left and went over to the Meet and Greet. What should have taken only about 15 minutes, ended up taking just over 50 minutes. It seemed most of the day the waits were long here but we didn’t let it stop us from enjoying ourselves. We rode what we wanted to and saw the shows we wanted to including Rivers of Light. Some may not like it but we do, however we miss the CMs that were in the show. Lunch was FTB and dinner was at Yak & Yeti

3-12 - EP - We had some issues with charges and headed to the Guest service here at the resort. Saw a charge of the same amount from the same place. Also we needed to pay on the room charges we had made. The reason is that they are charging the card thru the bank or whoever you have it with. We don’t have an issue with the hold, however it is a pain to deal with because we have gift cards we are using. We ended up being late to the park (from when we wanted to be there) and had to do some rearranging of our touring plan. We were able to get in what we wanted to do. Dinner at Yachtsman. We ate things at different places in Epcot and had dinner at Yachtsman.

We are heading to EMM for HS - Toy Story land so I will end this overview for now, as I need to get some much needed sleep.

Believe me, it was not easy but having reservations for the Chef’s table at V&A, oh and Monster Energy Drinks helps.

Thanks for the update! I am sorry you missed EMM!

Could have been worse. We still enjoyed ourselves. Expensive lesson to pay closer attention to time changes.