Trip report begins....First time visit in 20 years, and with kids!

It’s late so I’m only going to list a few observations from our tip last week before I get into the actual trip details tomorrow:

I’ll also take this time to thank everyone on Lines for helping to make our trip so special. Looking back, I think we would have floundered around, wondering what to do most of the time if I hadn’t read and learned so much on Lines. <3

Bravo @McPluto! What a wonderful summary of observations! You gave some great advice and shared some great experiences! Thanks for taking the time to do this! Looking forward to your trip details!

Wonderful observations! #5 is a family rule of ours as well. Our last trip was 14 days, first time we adopted this, first trip without a meltdown from anyone, including me!!!

Finally, stop and smell the roses occasionally. In the rush to get everything done, we sometimes lost sight of just how special it was to be in WDW, as a family, sharing special moments.

This is the thing I wish I’d remembered during our trip in February. We accomplished a LOT and we did a really good job (if I do say so myself) of managing everyone’s moods, but I wish we’d had more little slow-down moments. I suppose little boys (7 & 10) don’t really like to slow down very much though. Next time!

I’m interested to hear your impressions of being at WDW with older kids. I know you may not have an earlier trip to compare it to, but I’m curious to know what wonderful things I have to look forward to in a few years. I would imagine it feels very comfortable to be there with older kids.

wow. Great summary and POV!! These are fantastic tips.

Thanks for sharing your observations. Always helpful to get everyones perspective.

Thank you for this! #10 actually made me tear up because my two are now 11 & 8 & I am seeing how quickly time goes by…So glad you had a great trip!

Regarding #4, while tour groups can mess up wait times on attractions, you haven’t lived dangerously until you have attempted to enter a restroom that has just been invaded by a tour group.

Thanks for sharing your trip report so far. Can’t wait to hear more observations!

Great report so far. Can’t wait to hear the rest.

[quote=“McPluto, post:1, topic:2583”]
Finally, stop and smell the roses occasionally. In the rush to get everything done, we sometimes lost sight of just how special it was to be in WDW, as a family, sharing special moments.[/quote]
Love your report so far! Looking forward to more. I completely agree with @SallyEpp_cot. This is such great advice that it never hurts to hear it over and over!

I started to cry and looked at my own girls, wishing they were younger. Life goes by fast. Revel in it.

Major pixie dust in my eyes! I feel the same way!

Thank you. That is a wonderful summary and POV. Looking forward to more posts, this was great.

Adding to #9, when in Epcot do NOT forget to block you legs. I did and I got burned, the walkways are so glittery it reflects back and burns you.

Now that they are older, it is definitely more relaxing not having to keep my eyes on them constantly. With four close in age, when they were younger, crowded places were a nightmare. I will say more about the kids later, but basically most days were like this:

Awesome. I can only imagine the drama alternated with sweetness. 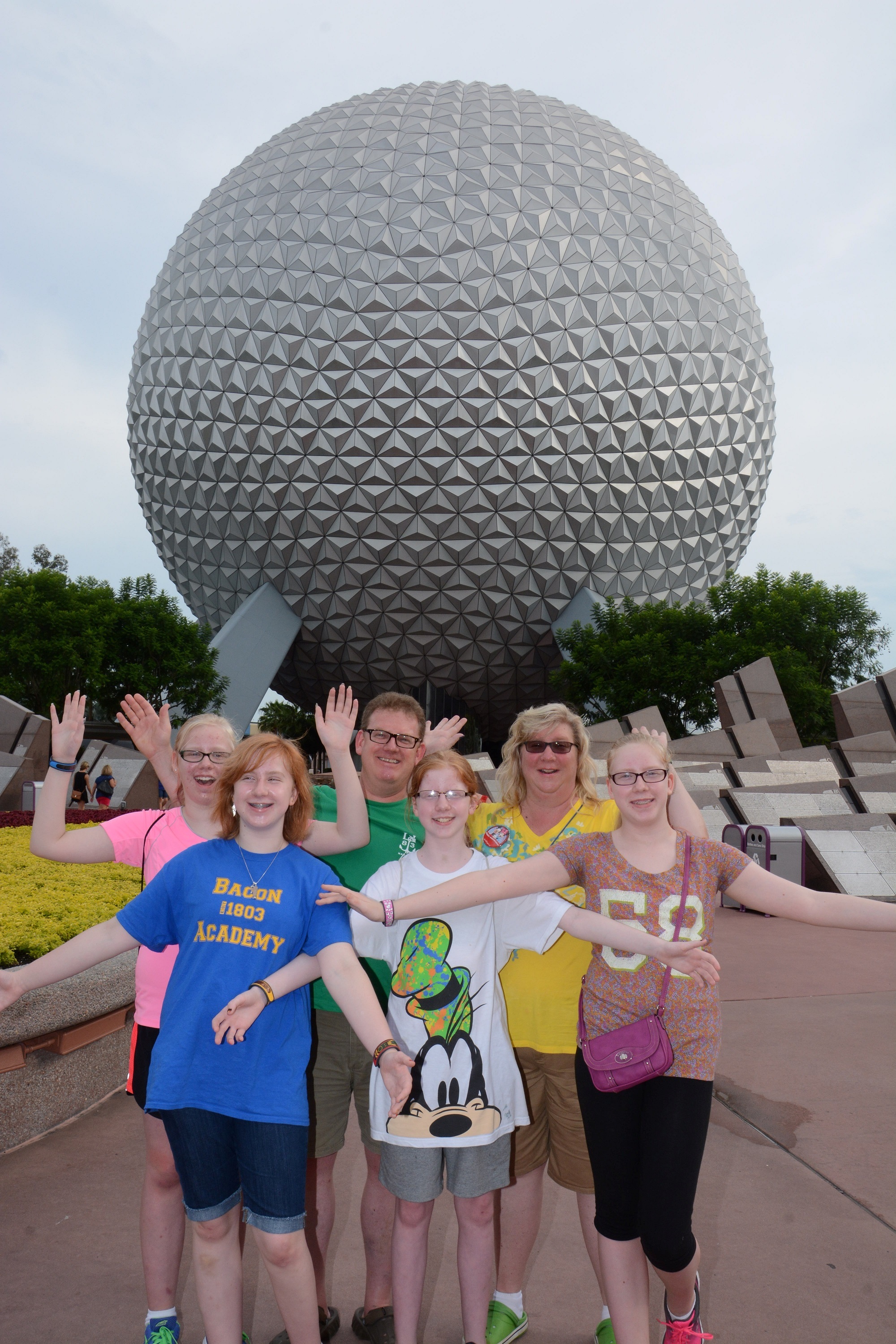 Here we are on the first night getting to Epcot around 5pm after checking in at Fort Wilderness. @Outer1 Here you can see a peek at me rockin’ the socks and crocs. LOL

As far as online check-in goes, the check-in itself still took a while but we didn’t have to stand in line, so that was nice. Garden Grocer had delivered all our groceries to the cabin and they had called me to confirm delivery. Awesome! We basically dropped our luggage off and went to the bus stop to get to the other bus stop at the Outpost to head to Epcot. Yes, the bus system is a bit of a pain at FW, but I found it to be running efficiently most days, We just had to build in some extra time to get from the cabin to the parks.

So the moment I saw Spaceship Earth I was as giddy as a school girl. We rode it first since the crowds were very light that night. Hit Test Track next with a FPP. Loved it! But this was a case of the whole ride experience taking longer than I thought it would. Lesson learned pretty quickly. We ran into Donald Duck near Mexico and had some pics taken with him. Two of my 12 year olds were a bit “creeped out”, as they said, by the characters at first, but after a few more meets with other characters in the first couple days, they got over that quickly. I think it was more a case of tweens trying to be cool. By the time we were done with Donald, we had to get to our reservation at La Hacienda, 7:30 but got there about 7:20. The dinner and Illuminations were probably my favorite highlight of the entire trip. The food was great. pricey though and the menu is a bit limited, but service was great, and the show from the window vantage point was awesome and relaxing.

Leaving the park among the throngs was not too bad. We strolled and shopped along the way back to the bus stop and waited maybe 15 minutes for the bus to come. By the time we got back to the cabin it was about 11.The kids went off to bed and DH and I unpacked and set the alarm for the next day, another Epcot day and we did spend the entire day there.

We had a FPP for Mission Space at 10 and we all did Orange. Whoa, what a trippy ride! I loved it but did feel vaguely nauseated at times. One DD was white as a sheet when she got off, but soldiered on, vowing to never go on it again as long as she lives.

We had a lunch ressie for 12:30 at Restaurant Marrakesh so we went straight to the WS to explore. One highlight was Pick A Pearl in Japan. DD14 absolutely loved doing this and ended up with a nice size pearl. The CM doing the oyster shucking was campy and loud and exciting and we had a ball just watching DD grin the entire time. Only one DD12 did Agent P and only in the Mexico pyramid but it was fun. Too slow for her though. She didn’t have the patience to do more. We had a FPP for Maelstrom and it was a big hit with all of us. Exploring the Norway pavilion was fun, though I now see our memory maker pics of us all acting like silly Vikings are not in the mix, so I guess I’ll be calling Disney for that.

Lunch was really terrific. I love the Morocco pavilion the most, by the way, so colorful and exotic, incense everywhere. Met Jasmine and Aladdin. Anyway, we loved the belly dancing and musicians inside the restaurant! The belly dancer took two of my willing DDs up with her and some other kids to dance and learn some moves. Lunch was not crowded at all, possibly due to people being afraid they won’t like the food, or that it’s too spicy? but I tell you, one of the best meals we had the entire trip was that lunch. And the atmosphere was relaxing with a beautifully appointed dining room and great service. I could have stayed in there for hours.

After we finished exploring the WS we headed to a Soarin’ FPP, just as it started to rain. But we had to get there. This was the night my sneakers got soaked and I acquired blisters on the bottom of both feet. Such a great ride though, but the screen/film needs major refurbishment. It did break the immersion for me at times. Then the hunger set in as the rain kept coming down so we ate at Sunshine Seasons. I’d say it was all pretty good. The Asian meals were a big hit, I had a delicious caesar salad and sandwich. Then we did Nemo and the all the Seas stuff. Loved that. Did not have time for Ellen’s Energy but we did Living with the Land and loved it… It was still drizzling when we left and got back to the cabin around 10 and just hung out and had some much needed down time.

More later! I have to go make dinner for the troops, which I was SO happy I didn’t have to do all last week.

happy sigh This is awesome reading @McPluto! I feel like I’m tagging along on your vacation! Thanks so much for taking the time to write this out and can’t wait for the next installment!

Excellent recap. Epcot is my favorite park. And i’ll forgive you… this time!