Now we are on to Day 3 - Saturday, March 18. With the super full 8 am - 9:30 pm day yesterday (21,000 steps!), we planned on taking it easy today, hoping to sleep in a bit and be at AK around 10 am. Well, our boys’ internal clocks are hard to subvert - they were up playing on their iPads around 7 am. We packed our belongings for the transfer to BLT, separating out a pool bag that we took with us to the park. We called Luggage Services for the bags (they were also able to keep our groceries from the mini-fridge cold too) and we were off to the parks, getting there right at 10 am. 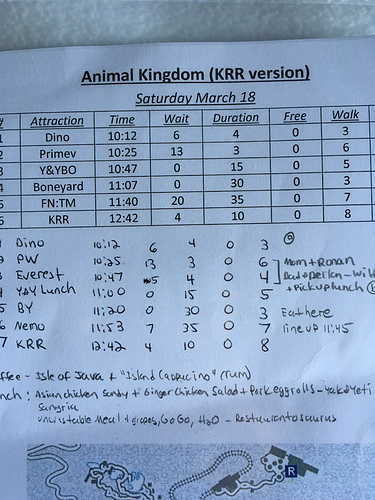 The 6 yr old wasn’t having any part of Dinosaur once I explained it was dark and a bit scary, so we child-swapped it and my wife took the 8 year old on first. The TP site repeatedly insisted in the weeks leading up that Dinosaur at that time should be a 6 min wait, but having logged into Lines at the same time a week prior, I was expecting more of the 25-30 min wait that wound up being reality. Dino wound up being too intense for the 8 yr old as well, he spent much of the ride with his eyes closed - I wish I could upload the ride photo here! He had no interest in riding again, so I wound up giving away the child swap pass to some dude walking by.

Just as well, cause my itinerary was the most ambitious time-wise of the trip. The goal was to fit everything into the smallest timeframe possible to maximize pool time later in the day. The secondary goal was to make sure KRR was last so that getting wet wouldn’t be a problem. This quest was aided by canceling our Exp Ev FPPs after the 6 yr old’s experience on Day 1 - he had no interest in doing it again. I replaced them with Primeval Whirl FPPs - cause nothing else really needed one.

During Dinosaur I took the 6 year old to get a WE badge, then sat and waited for them to come out of Dino. Then the 6 yr old, who still likes coasters as long as they’re not in the dark, went to PW with my wife, while the 8 yr old, who still has no interest in coasters, came with me as I set off on my ambitious plan to help maximize pool time. I wanted to get lunch to eat while the kids were playing in the Boneyard before our Nemo FPPs for the first show at noon. This way, we didn’t have to cut into pool time by spending 30 min eating after all the rides were done. So we trekked over to Y&Y, just wanting to pick up a few easy bites from the Beverage Outpost, but alas, it didn’t open till 11:30 am. So around the corner to Y&Y Local Foods Cafe, which has all the same items on the menu, but with a very long line. Picked up an Asian chicken sandy, a ginger chicken salad, a couple of kids’ meals, sangria, and a Safari Amber (wouldn’t recommend). Balancing this large tray of food proved challenging but I managed to fast walk it back to the Boneyard where my wife and 6 year old were already playing. Mission accomplished - quick easy lunch while double-timing an attraction.

The Boneyard is great because the adults can hold down a bench outside with our food/drinks while the kids play - at least kids of our age. 11:45 is the end of our Nemo FPP window, and as it approaches we finish eating and gather up the kids. I have to say, I LOVED this show. The Lopezes will always hold a special place in my heart for Book of Mormon and Avenue Q, so it was a nice surprise that they did the music here as well, but beyond the songs, the staging/costumes/effects were just staggering. Great show! Our kids started a trend here of running down front as far as possible and sitting separately from us, and here they were in the front row, which they loved.

Afterwards, we headed back to Asia, changed into flip flops, and used our FPPs for KRR. Good thing we changed - my 8 year old and I were the winners of the "who gets soaked " lottery. We got it good, while most everyone else went dry.

We headed out of the park, pausing for a few more Photopasses, and seeing a few more animals we had missed on DI or in the Oasis, before bidding adieu to AK. It was off to Bay Lake Tower.

Upon arrival our room was not yet ready, but we changed in the pool bathrooms and enjoyed a nice swim. It was a 74 degree day but very breezy. We had hoped to get a good long pool afternoon in, but the kids got cold after an hour or so. They enjoyed the slide but man, going up that thing was brutal, the wind really hit you. Some hot tub time warmed us up, as did finally finding an old favorite of mine, my favorite beer of the trip - Cigar City Jai Alai IPA. My wife enjoyed some of the Cove Bar’s margaritas.

If it had been warmer, we would have lounged longer and gotten dinner from the Cove Bar as well, but the kids were cold, so we retired upstairs when our room came available for some downtime. We requested a lake view and received room 8040, on the 10th floor, which was more a straight on view of the Contemporary pools, looking pretty much directly south, but you could see the lake on the left side, and again, no parking lot view, another win.

So instead of the Cove Bar, we headed over to the Contempo Cafe for dinner, which was really good! We didn’t have much expectation for it, and it surprised us. My wife and I shared the American Wagyu Beef Slider Duos and the Caprese Flatbread, both of which were delicious. The kids caught their first glimpse of the monorail and were appropriately awed at the sight of it coming into the Contemporary. I somehow convinced them that riding the monorail to the MK wasn’t the best proposition given how quick a walk it was, and with promises of riding it the next day to get to the Polynesian, we were off walking.

Our evening MK visit was always planned to be done completely sans Touring Plan. “Whatever looked fun” was the plan. Earlier I had been able to pick up Buzz FPPs, so being in Tomorrowland we first went to the Carousel of Progress. This was purely an exercise in nostalgia for my Disney youth trips in the 80s, but to my surprise my kids LOVED it. They were so surprised when our seats started to rotate. Side note: a week later, I’ve still not gotten the song out of my head, it’s underratedly way more insidious than Small World.

Next stop: PeopleMover: more 80s nostalgia! Again the kids really enjoyed this, especially going into Space Mountain. Then we did Buzz, which I knew they’d love, being into video games and all.

After Buzz, it was 8:30, and we went over to grab our spot for Wishes, finding open ground near the Walt statue. My wife and son went over to Sunshine Tree Terrace for Citrus Swirls, only to have the machine break after 3, so I wound up with pure vanilla soft serve (gratis, at least). Wishes was a family favorite, the kids were super impressed. 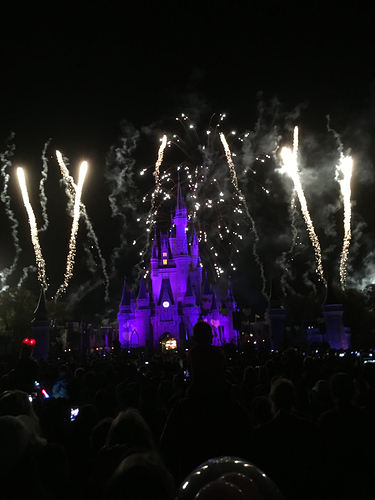 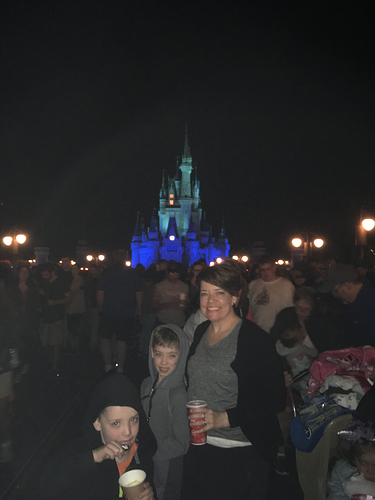 As we were planning on RD’ing the MK the next morning, we decided not to stick around till 9:45 for OUAT. Bad decision? We were all tired, I think it was fine. Back to the room and the day was over.

OR WAS IT??!! We quickly discovered the day was never really over at BLT, because every night around 10:15 we were bombarded with the anachronism of the Electrical Water Parade. I mean, it was nice being in a room with a parade view, but does it have to be SO DAMN LOUD?? It woke our kids up nearly every night.

Not so many pics taken today - I was getting lazy and relying on PhotoPass. Sorry!

Thanks for sharing your trip report. I especially liked the divide and conquer strategy to get lunch efficiently.

Question… did your family prefer the Kidani or BLT pool? Or similar?

To be honest, we didn’t even see the Kidani pool. I don’t even know where it was. We were there only 2 nights and had busy park schedules the whole time. BLT pool was great - big, nice slide, hot tub, good bar. All we needed. Pre-trip I had heard Kidani pool was nice, but unfortunately I can’t confirm with first hand info. Sorry!