First, much thanks to the multitudes of Liners who provided thoughtful and astute advice in my many feverish weeks of planning the trip. It seems like for a solid month I did nothing but eat, breathe, and sleep Disney planning. What to do with all this free time now?!

Our trip actually begins at 9 am the day before (Wednesday the 15th). For some reason, we decided to save money by scheduling a late flight the day before our park passes began, staying in an airport hotel. This was way before I started using this site to make TPs and book fastpasses, and as that process began I realized we might have made a mistake in the flight scheduling. So we decided to try to get out a bit earlier by attempting to fly standby.

So at 9 am we get a Lyft to the airport (Eastern Iowa, only about 10 min from our house). We had been told the day before over the phone that there was plenty of room on an earlier flight to Minneapolis as well as on a flight from MIN to MCO. Upon arrival at the airport, though, we were told it was no problem to get on the flight to Minneapolis, but we’d be highly unlikely to make standby on what was now a full flight to Orlando. So back home we went - a bit anticlimactic. We played Clue, had lunch, revised TPs, and watched a movie before heading back to the airport.

This time, we were more successful. Our flight to Atlanta was delayed by an hour but fairly smooth. Our original flight from ATL --> MCO was delayed to 11:15 pm, though - really really late for young kids. So we sprint to the gate for an earlier Delta flight for the same route. Good news- there’s room! Bad news - only for three of us! So I fell on my sword, put my wife and kids on the earlier plane, and went and had a beer/food at Gordon Biersch. They were in bed at the hotel asleep by midnight while I was still in the air - good choice on our part.

Thursday dawns, we awake, get dressed, grab the free breakfast at the Hampton Inn & Suites Orlando Airport @ Gateway Village (which we found very nice and accommodating), and called a Lyft to travel to Animal Kingdom - Kidani Village. 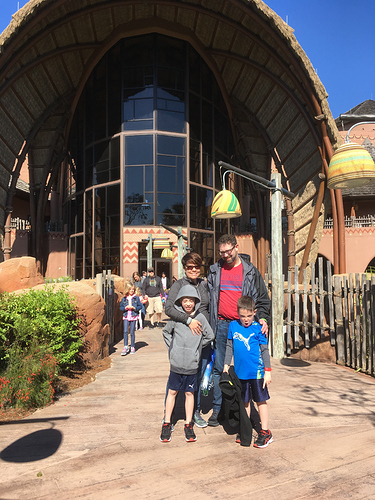 Here we are on the back animal observation patio - my wife, two kids (ages 8 and 6), and I. We dropped off our bags, caught the bus to AK, and the fun began.

A note on my planning process - there was a thread here discussing how to print and carry the Touring Plans. I used the link someone had provided in that thread to purchase the 5.5" by 8.5" mini sheet protectors: https://www.amazon.com/gp/product/B0006NI6HA/ref=oh_aui_detailpage_o01_s00?ie=UTF8&psc=1
I typed up the touring plans in a Microsoft Word table, printed to 8.5" by 5.5", cut them out, notes-ed them up with ideas for coffee, drinks, and snack stops, and put them in the sheet protector along with my Beer Geek Guide for the park in question and the color map from easyWDW. This worked GREAT - my 8 year old loved seeing the itinerary and using the map to guide us to the next attraction. Here’s the basic idea (though this one was handwritten the day before to adjust for the weather - it was too chilly for Kali River Rapids, so I switched its FPP with our Saturday FPP for Exp Everest): 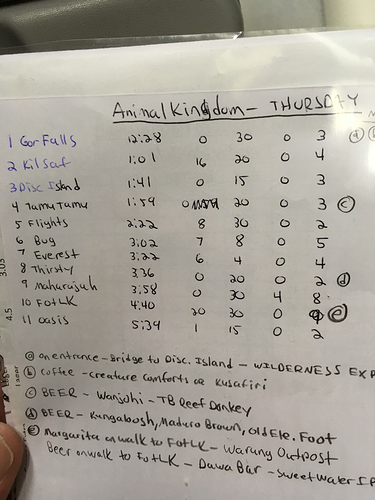 We loved the look of AK - gorgeous. We ooh’ed and aah’ed on our walk in through the Oasis and across the bridge to DI. We stopped to pick up Wilderness Explorers guidebooks, and I revealed the surprise that I had purchased Memory Maker to the family. I was going to insert a photo but the PhotoPass photos are too big to share - is there a way to save as a smaller size file?

The first stop was Gorilla Falls Trail. The kids loved the underwater view of the hippos, the bird area, and the baby gorillas. They earned several WE badges along the way. Next stop was our FPP for Kili Saf - the kids loved shooting past the lines right onto a jeep, where we had front row seats right behind the driver, who enjoyed listening to my 8 year old’s additional animal facts he gleaned from watching Planet Earth 1 & 2 (ie, the flamingos are pink due to the amount of shrimp they consume). Of particular note was baby Stella the brand new elephant who we briefly glimpsed. Sights of my kids’ favorite animals were also highlights - the cheetahs for the 8 yr old and monkeys for the 6 year old.

We stopped on the way out of Africa at Tamu Tamu for our first experience with Dole Whips. My wife got the alcoholic version, but I’m not huge on liquor, so I eschewed the DWs altogether in favor of a Sweetwater IPA from Dawa Bar. We meandered down to Flights of Wonder, which was a huge hit with the whole family. My kids are super earnest and love shows - they are total suckers for the slightly cheesy yet humorous brand of comedy that typically is part of most Disney shows - mix in live animals and we have a winner.

At this point we deviated from the TP - the app put BUG at a 30 min wait, which was more than we had budgeted, so I switched things around and went to Maharajah instead. My wife took the kids through the trail slowly while I hopped over to Thirsty River to pick up a Kungaloosh!, which according to my beer guide is the highest rated beer in AK. I didn’t necessarily deem it worthy of such praise, it was pretty average IMHO. I caught up to the fam 1/2 way through the trail, and then we went right to our EE FPP. We child-swapped it as my 8 yr old isn’t a huge coaster fan. First I took my 6 year old on it - I thought it was a super smooth and fun ride, but the darkness really turned my 6 year old off - we hadn’t realized his fear of the dark would cause him some real trouble on a lot of the rides. He elected not to ride it again while my wife took her turn.

This brings up one small flaw in the TP planning process- they vastly underestimate child swap times. They account for the doubling of ride time, but depending on the ride you often have to wait through the whole FP line again, which is often 5-10 minutes. This repeatedly put us 20-30 min behind on our TPs throughout the whole trip - minor, but noticeable.

At this point the BUG line had died down, and we were able to get in after a ~6 min wait. My kids love grossing out my wife with snakes and bugs, so this was right up their alley - they thought it was HILARIOUS. In hindsight though, it was a dangerous move coming here - we had 4:30 - 4:45 FPPs for FOTLK, and we got out of BUG around 4:43. We SPRINTED over to Africa where we juuuuuuust missed the FPP window, but the sad looks on our kids’ faces made them take pity on us and let us in. Wow- what a show! We quickly discovered how impressive the production values are on the Disney musicals - the acrobatics, costuming, and singing were all spectacular. The whole family loved it.

We meandered out of the park afterwards, stopping for more Photopass pics and to see the animals on DI. It was time for dinner back at the hotel - SANAA.

We were highly impressed with Sanaa. We got the bread service with all 9 accompaniments and were happy that they weren’t all dumbed down for mass appeal - some of them had quite a spicy kick to them! We tried the butter chicken, the goan seafood curry, the roasted okra-cashew tomato stew, and the African inspired Biryani with shrimp. Rave reviews all around, especially the curry. I also tried some local flavor with the Orlando Brewing I-4 IPA. Normally I think IPAs are the best possible accompaniment to spicy food, but this one got lost next to the majesty of the bread service. We skipped dessert to make it out to the backyard bonfire and night vision viewing of the animals, where we also listened to stories of life in the guide’s native Botswana.

Great report, thanks for sharing! Looking forward to the rest

I love the itinerary idea!

Oh, and I forgot to mention the grand finale to the evening. We had requested room 7737 at Kidani to take advantage of the trick discussed on this forum to be in a standard room but to still see some of the savannah. We received room 7955 - 5th (top) floor near the top of the curl of the building. It wasn’t a full on savannah view - there was a small strip of grassland with a few animals, but then there was a fence, a park road, and then mostly just Florida scrubland stretching north. This was fine though - much better than a parking lot view!

Upon return from dinner, it was right about 9 pm, and our kids noticed fireworks outside - we could see Wishes all the way down at Kidani. It was a dead on view straight in front of us. As we enjoyed them on the balcony, we also noticed more fireworks to the right - Illuminations! And then lasers and fireworks just to the side of that - Star Wars: A Galactic Spectacular! We were able to view all 3 shows basically at the same time, a complete surprise. I think we were aided by being on the 5th floor, as that was just over the treeline. 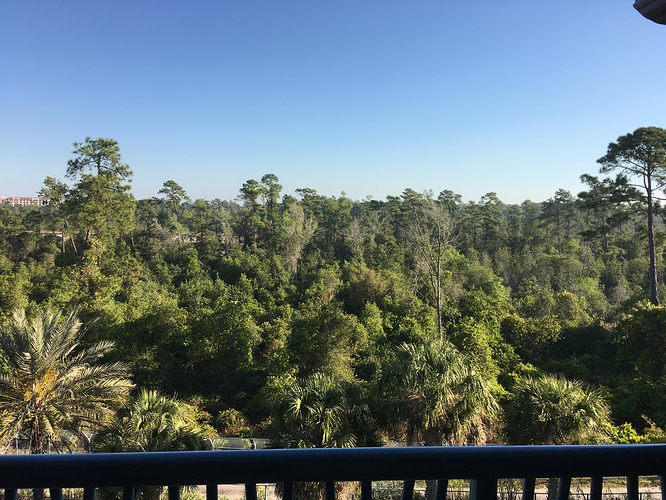 Thank you for writing a report! Fireworks? Magical!

How awesome to see all the fireworks!! And from your balcony too

This is great. We’ll be there in a month, staying at AKL Kidani, eating dinner at Sanaa. I can’t wait.

I’m just catching up on these. (Being home with a sick kid equals reading time.) Sounds like a great start to your trip.