As we were traveling to Orlando from Nashville, I began to get a little worried I had made a terrible decision to continue with our trip in the midst of Hurricane Irma. I had already stopped in Chattanooga to buy some gas cans and filled up 8 five gallons cans just in case we couldn’t find gas in Florida. From the North side of Atlanta all the way into Orlando, there was a steady stream of headlights leaving Florida and we were one of the only people headed South. This was at 2-3 AM and there was actually traffic along the way headed North. As we got into Florida, they was a lot of lines at the gas stations and some were even out of gas. Getting more nervous now. We arrived in Orlando at about 5 AM. Our room at Allstar Sports was not ready until 4:30 PM. We hung out at the pool while we were waiting for the room to be ready. Finally the room text came. 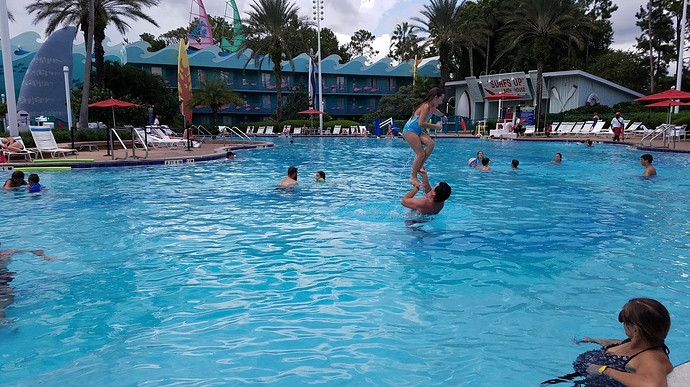 tony syd pool.jpg1727×971 534 KB
I almost went to the front desk to complain but they had been so busy all day. I was glad there was a line and I did not complain because there was a special surprise from Disney for my daughter’s birthday. 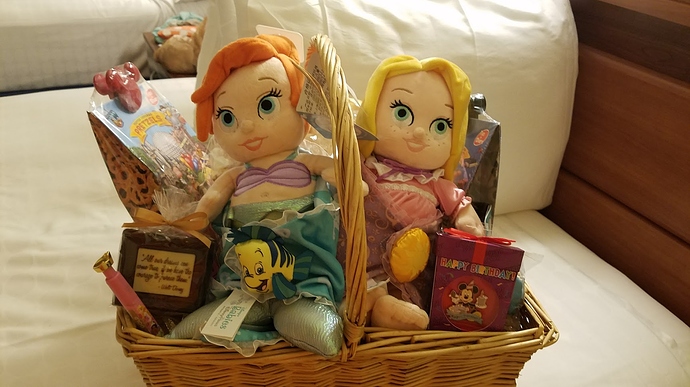 sydney&#39;s basket.jpg1727×971 220 KB
The basket was beautifully arranged but my DD9 had already got into before I could take a picture. We got ready and headed to Trader Sam’s Grotto. I wanted to show my dad and stepmom Trader Sams. I don’t really drink alcohol at all but we ordered 2 drinks because my DD9 wanted to see the effects in the bar. We ordered the Krakatoa Punch and Uh-Oa!. I actually liked the punch but the Uh-Oa was just too strong for me. We also had Kalua Pork tacos and Pan-fried dumplings. They were both very good. My DH and dad ordered the Kona beer flight and they both enjoyed it. After paying our bill and looking around, it was time to make our way to the Wilderness resort for our 8:30 HDDR reservation. We loved everything about the HDDR. The food was delicious. Everyone in our party really liked the show as well. It was worth it and I would definitely go see the show again. After the show, we headed back to the resort to rest because Saturday was our 1st day at Animal Kingdom.
8 Likes
gr82btnvol September 20, 2017, 6:14pm #2

I will try to finish up more of the report tonight but I am not sure if I will have time.

That must have been eerie being only one of a few cards heading south.

It was! We almost turned around and came back home. I am so glad that we went because we had one of the best trips ever!

Saturday 9/9 was the best day I have ever had in the parks. Crowds were super low. Went to HS first, did every ride twice, they could not even fill the elevators on ToT. Then went to EPCOT, road soarin, TT and MS. Then went to AK and only waited 45mins for FOP.

Sat Aug 9th!
We woke really early because we wanted to get to AK by opening or shortly after opening. We arrived at AK about 9:30. We headed straight for Pandora because I wanted to ride the NRJ. We had FPP for FOP later in the day. We jumped in line and waited about 5 mins. The posted wait time was 15 mins. I really thought the NRJ was a beautiful ride but it was so short. I would not wait more than 15-20 mins for this ride. I did not love it. We headed straight to Kilamanjaro Safaris for FPP. The animals had just been fed so we were able to see them out and active except for the lions.<img src="//tpforum.s3.amazonaws.com/original/3X/7/ 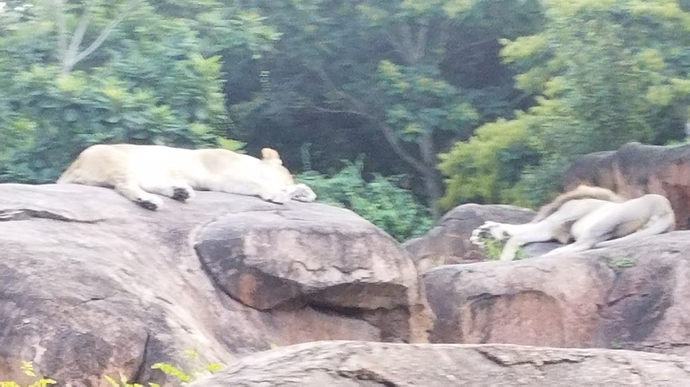 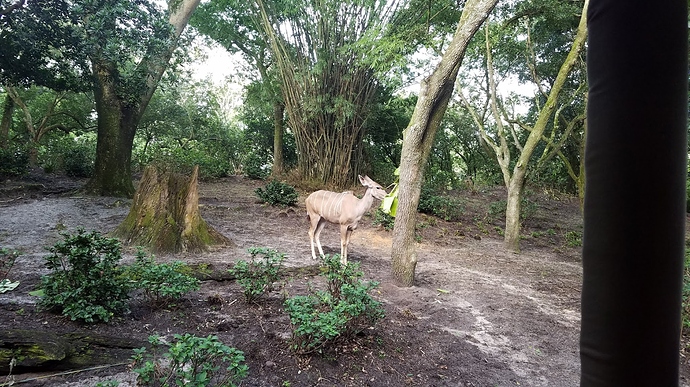 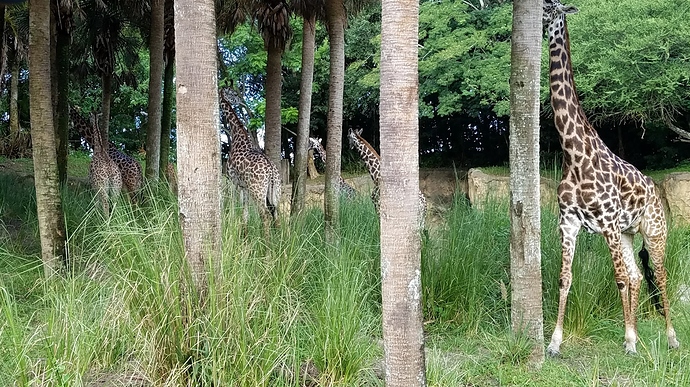 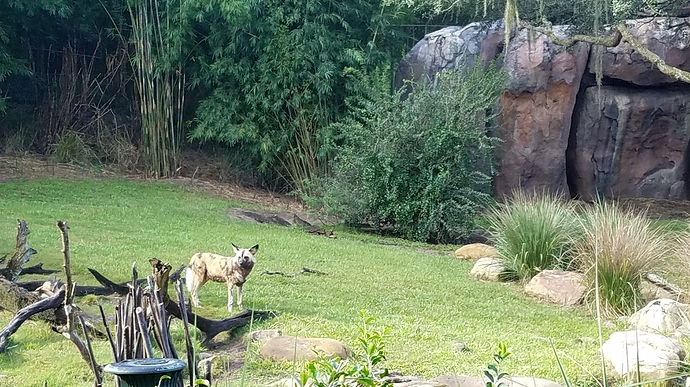 3.jpg1727×971 437 KB
After the safari, we had reservations for Tusker House so we made our way there. We really liked the food at Tusker House and the was enough selections to keep even our picky eaters happy. My DD9 enjoyed talking with and meeting the characters. 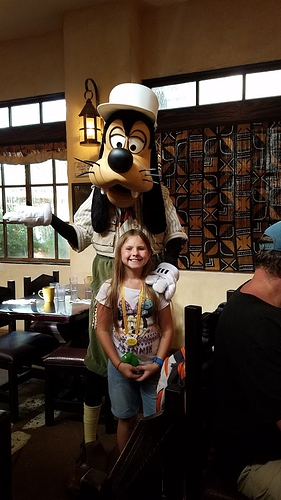 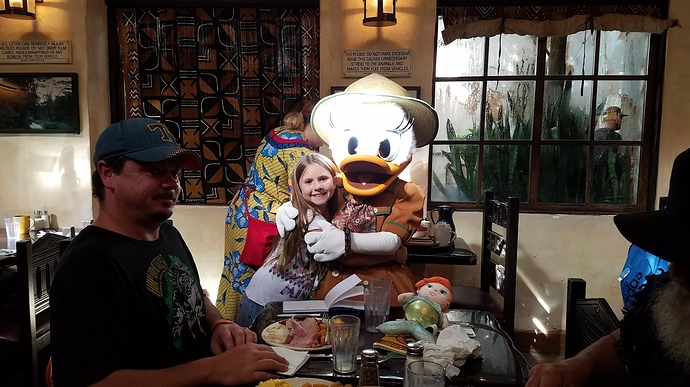 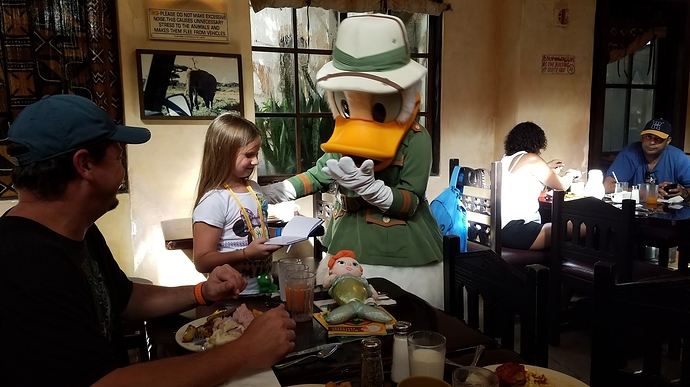 TH donald.jpg1727×971 262 KB
After breakfast we went and rode the KRR. We were able to ride every ride at AK with no wait or a short 5 mins wait. Now I did not even try FOP because we had FPP for later in the day. We went and enjoyed one of my DD9’s favorite shoes at AK, “It’s Tough to be a Bug”. It was fun as usual. I was able to get FPP’s for everything we wanted to ride or see that day. My DD9 was even able to complete the Wilderness Explorers booklet during this trip. We had a great time all day at AK. It was not crowded at all. We finally got to see Devine. 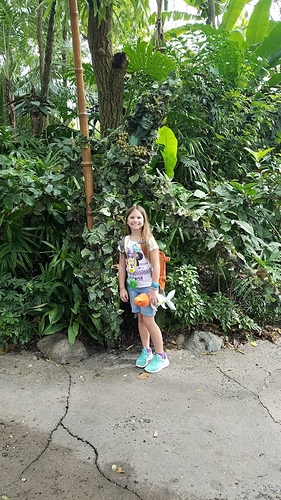 divine.jpg546×971 233 KB
It was finally time for our FPP for FOP. Let me just say that everyone in my group loved that ride. It is amazing!! I probably would wait in line for it but luckily I was able to secure FPP’s for 3 of our days. After we explored Pandora a little more, it was time to leave to make our way to Sanaa for dinner. We arrived at Sanaa. I was most excited for this meal because of the bread service. I am a girl who loves bread and the bread service at Sanaa did NOT disappoint. I loved them all. That bread is so good that I didn’t even want to put the sauces on it. My DD9 was exhausted and fell asleep right after appetizers. I loved the atmosphere at Sanaa and the bread but the rest of the meal was not very good to me. I can say I don’t like the African spices and flavors. I did not take photos of our food at allon this trip. Sorry guys!
Day 2 and 3 were spent at the resort because everything was closed and we were under a mandatory curfew. Hurricane Irma came through late Sat into Sun. morning. Being from TN, we deal with Tornadoes a lot. We also get a lot of storms with wind and rain so we were not too worried about what Irma was dishing out.
Tues Sept 12th. MNSSHP
Today was the one day that we slept in during this trip because we had a 9:05 AM breakfast reservation at Trattoria al Forno for the Bon Voyage Breakfast. This meal was probably my favorite breakfast in all of WDW. The pastries were really good. I ordered the the Shipwreck al Forno. Let me say, I was pleasantly surprised at how very good that was. It really was delicious. It was way too much food to finish though. I noticed that was a theme in all of WDW . Way too much food was served during every meal. 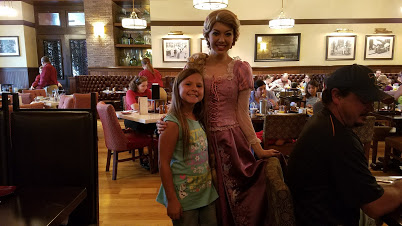 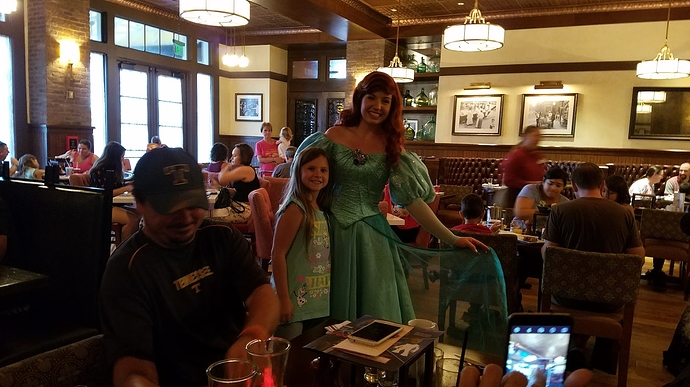 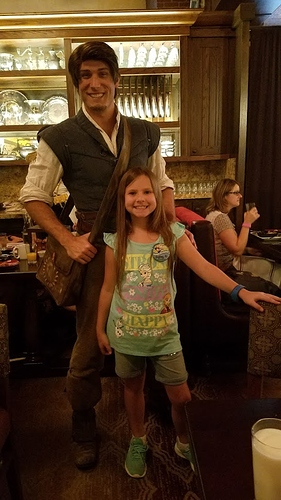 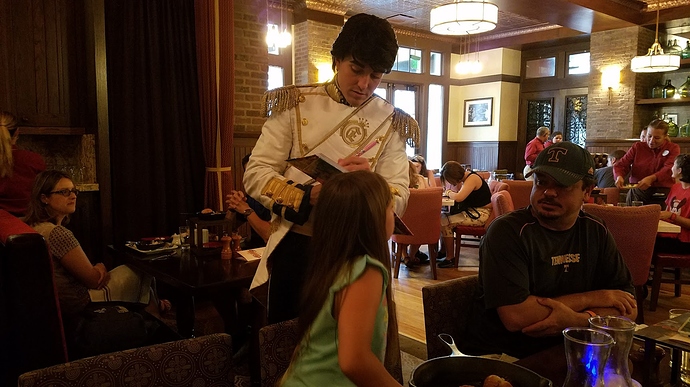 eric.jpg1727×971 316 KB
We left breakfast and headed straight to Disney Springs for a BBB appointment. Now this was the not the 1st time we had done BBB and I wanted my DD9’s hair fixed a different way. I went and explained this. I paid for the appointment and bought the Minnie Halloween outfit so we could have a photo shoot later in the day at BBB. 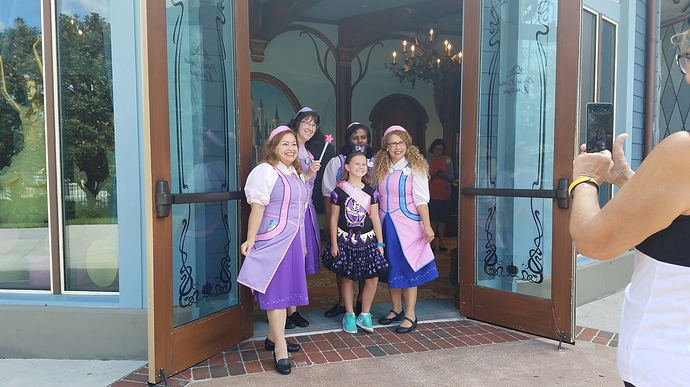 bbb.jpg1727×971 345 KB
I want to explain what I had planned for the MNSSHP and this is the reason I did not want to complete the BBB appointment. I had my brother, Johnathan Kayne, make my DD9 a princess dress especially for MNSSHP. Because this was a very special trip celebrating my DD9, I wanted to create a super special day for her. I made an appointment at the Ivy Trellis to get her hair, nails, and make-up done for the party. 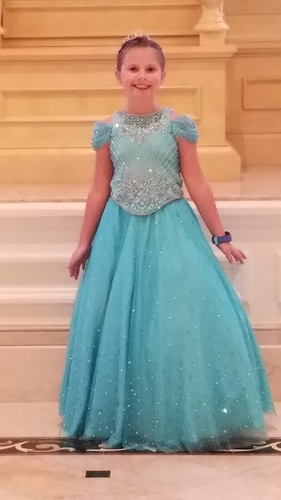 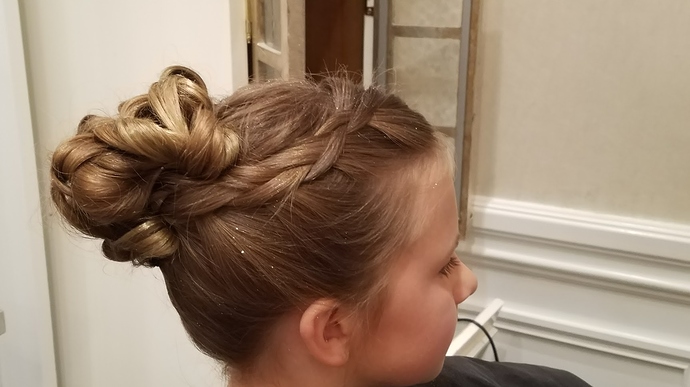 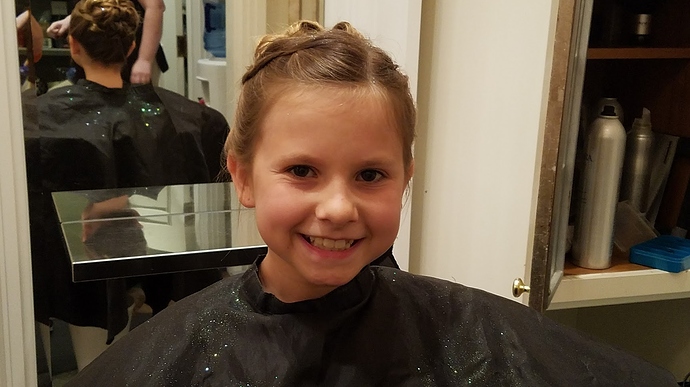 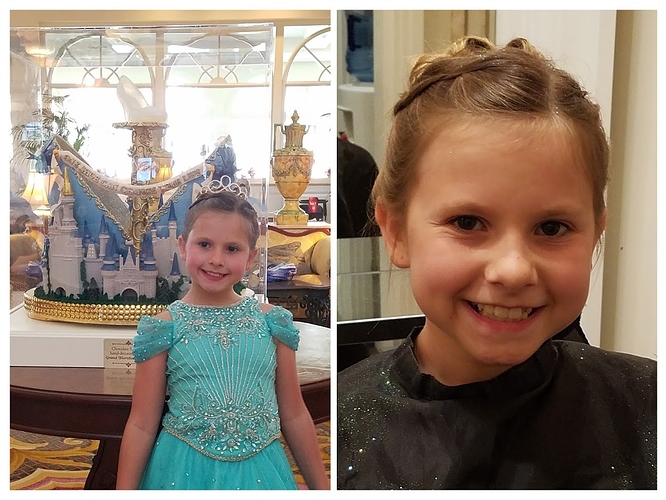 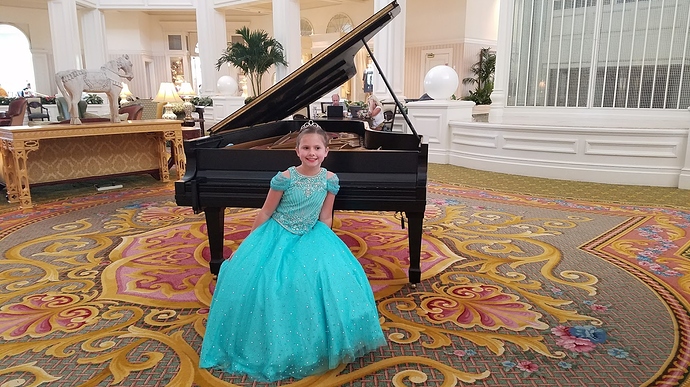 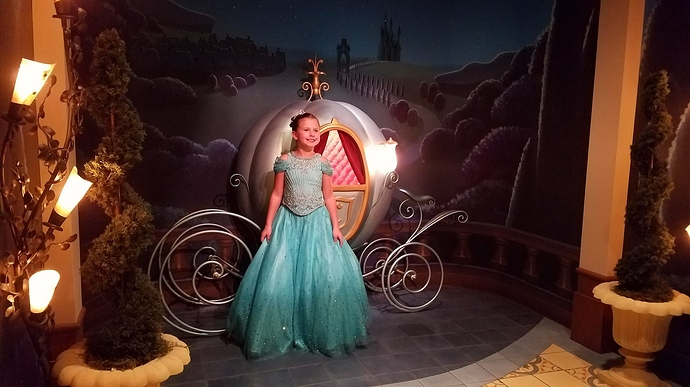 ds.jpg1727×971 253 KB
The fairy godmothers were awesome. They came in and directed her on how to pose and even did pictures with Sydney. Sydney felt like a true princess.
It was now almost time to make our way to Magic Kingdom for a 4:15 dinner at CRT. We arrived at CRT and Cinderella made such a fuss over DD9’s dress. My DD9 loved the attention she was getting. 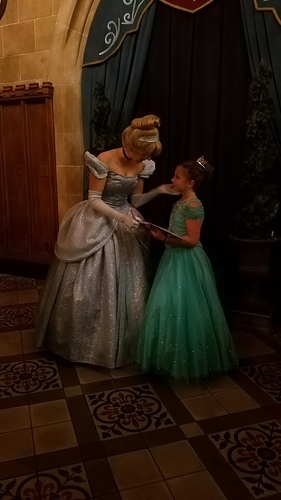 c.jpg546×971 64.3 KB
We made our way up the stairs to our table. I had ordered a some gifts to be delivered to Sydney at CRT from Disney Floral and Gifts. I was very pleased with the gifts. My DD9 was so happy and loved it all. 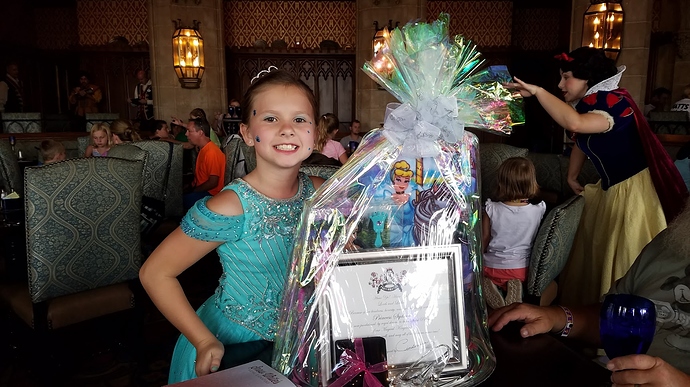 basket.jpg1727×971 393 KB
The gift basket was the Proclaim her a princess. I would definitely buy it again. The princesses made their way to DD9 and they each fussed over her dress as well. That would be a theme the entire night. My DD9 was over the moon excited with all the attention. Everyone enjoyed the food and atmosphere at CRT. It was worth it for my family. I ordered the chocolate glass slipper for my DD9. 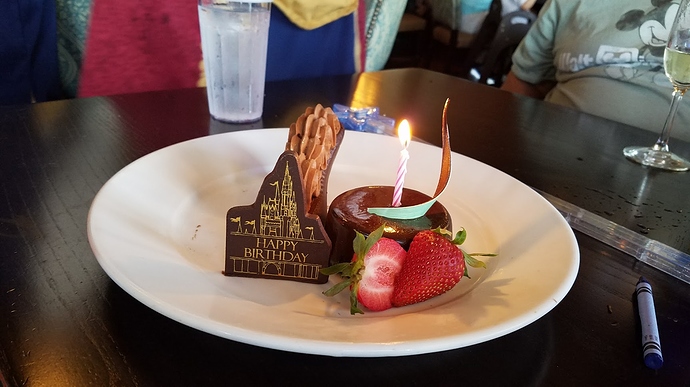 glass.jpg1727×971 223 KB
Ok so I took one photo of food.
As we left CRT, we ran into the step sisters. They said my DD9 must be rich because of her dress. She thought they were some of the better interactions with characters the entire trip. 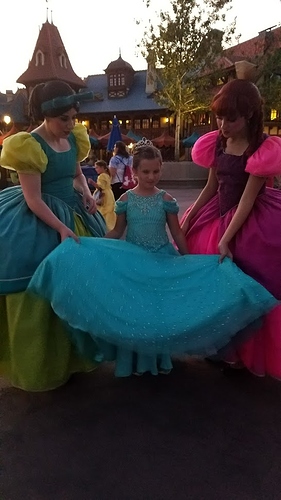 siaters.jpg546×971 80.7 KB
The rest of the night we spent getting candy, riding rides, and enjoying the MNSSHP. This must of been one of the emptiest parties of the entire year. Every ride was a walk on. They sent us home with about 10 LBS of candy. We all had a good time. I would do it again. I have some great Photpass photos but I have not even began to go through those. Really looking forward to doing the Christmas party during our trip next year.
By the end of the party, we were all exhausted and we had an early MK day the next morning.
6 Likes
gr82btnvol September 21, 2017, 6:14pm #7

Gtest report and lovely pics. Your DD’s dress is stunning!!

Great report. The pic of the stepsisters with your DD is too cute.

Love all the pictures! Your DD looks so lovely in her dress. What fantastic memories she will have of her Birthday