TPs telling me to use EP for Hagrid's this weekend?

So, we’re taking a last minute trip 12/10-12/14 to use up unbanked DVC points, and get one last use of Universal AP. We’re staying at Royal Pacific the first 2 nights, so we’ll have Express Saturday and Sunday and when I made a TP for Saturday a couple of weeks ago.

I went to update it just now and it’s suddenly telling me to use Express for Hagrid’s… anyone know what that’s about? It’s the same both on the desktop site and in the app.

There’s a new button on the desktop site that has a little clock and says UExp. When I hover over it it says “Add return times for Universal Express”, but if I click it I get a popup box that says “Universal Express Pass can be purchased for this attraction. We will support using it in plans at a later date”

Hi! I have not read any announcements that they have added express pass.

I can report back on Saturday, but it definitely wasn’t using EP today for it.

I haven’t either, but suddenly here it is! 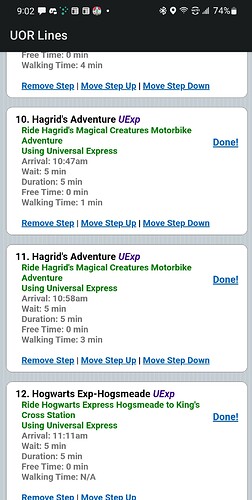 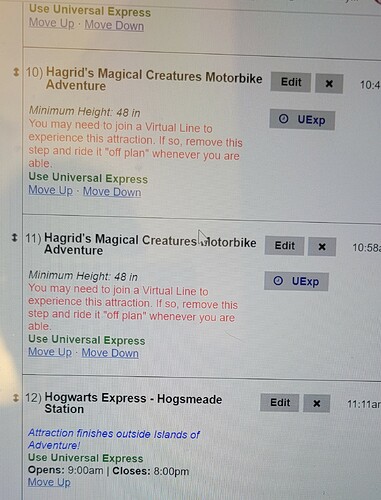 And the annoying thing is that I can’t unselect it for an individual ride, so I have to either use it for everything or use it for nothing in the plan.

It’s a bug that happens when you schedule 2 rides on Hagrid’s back-to-back. I noticed it a couple months ago and reported it, but nothing has changed I see.

I created a whole new plan with each ride only once and it’s still saying to use Express. So frustrating.

Did you completely trash / delete the plan or just remove the steps? I had to get rid of the whole plan and truly start over.

You can “work around it” with a break / meal between the Hagrid steps if you don’t want to completely start over.

Yup, started completely fresh for a new day and got the same thing. I guess I’m going to have to workaround anyway.

Good luck…been there… For me it only did it when I had multiple Hagrid rides. Eventually, I just put in a meal break at Hogs Head for like 60 minutes if I remember correctly…