I’m just wondering if anyone has tested a touring plan as written lately during a crowded time without using Genie+. I’ve made a few plans and followed the rope-dropping suggestions, but the plan never gets followed after the first few steps because of Genie+‘s unpredictability. Thinking of trying next trip without Genie+ and with only a plan, but not sure I’m brave enough. I also doubt I’ll make it there during a crowd level less than 7-8. Anyone??

I used a TP with great success at Epcot on October 5. We did not buy G+ but did purchase an ILL for Guardians and also got the free boarding group for Guardians as well for two rides. We stayed at Pop so Skyliner to International Gateway for early entry worked to get us to Remy. DS ticket didn’t work at the gate so we had to hit Guest Services (ugh!!!) to fix it so we weren’t able to get in line for Remy until 7:45 and wait about 15 minutes. After Remy we did Soarin since both FEA and TT were down. After Soarin, I refreshed my plan on the app and followed it from there adding in my ILL time for Guardians. If you use the app and optimize after every few rides, it works well.

I do this too. I optimize constantly and you can put in your return times as you get them so when you get a new one and reoptimize it won’t try to take you standby for it.

It’s a lot of work, but if you use thrilldata to help predict the G+ return times, you can input those into your plans and the accuracy can improve a lot. But it’s only as good as the effort put in.

I ended up creating “Genie+ Todo lists” for each park day. 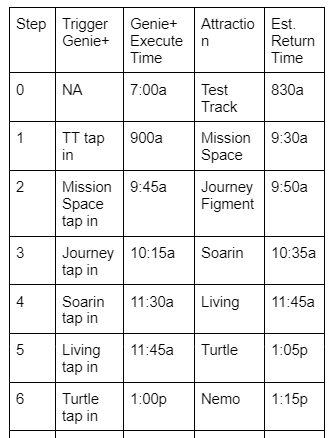 I kept those in Google Drive (they are google docs) and sized it so it’d all fit on my phone’s screen.

That worked well while using a custom TP like https://touringplans.com/plans/print?id=4711763

I put the finishing touches on all of it by hitting up the thrilldata on the same day of the week / same hours of operation, with about a month to go (trying to be as accurate as I could). This was for an August trip 2022.

It did work really well. It was a crap load of effort.

I used the BG1 with its additional drops to help me get all the things in Epcot. It also worked. Only ride we didn’t ride was figment at sons request.

What is BG1? I don’t see it on the acronym list. Sorry if this is a super dumb question!

It’s a free tool you can use to book LLs. It can list the rides in order of priority based on what will sell out first and it will tell you when there is going to be a possible drop. For example, I saw that they were gonna drop Frozen possibly at 12:46 or something like that and set an alarm on my phone for a couple of minutes before that. Then during lunch I snatched a Frozen LL that was good for right after lunch. I did this for the stuff I couldn’t get in the morning because I made choices like getting Test Track first. And by the time I got TT, Frozen was sold out. But using the app (and you could do this yourself with thrill data too I believe and keep track of when they are going to do more drops or have historically) you can get some of the other hard to get ones.

Wow, thank you! I thought I had learned every Genie+ Tip and Trick out there and yet this is a first heard for me. Thank you again!

Of course! Maybe you can be like me and get your spouse to say to your teen and his friend that you don’t go to Disney unless you know someone who knows all these secrets like we do! He was very impressed when I scored the Frozen LL at lunch with almost immediate rideability.

It made my day when he said that. I hope you get the same respect from your family when you master this stuff! It really should come with a degree or diploma of some sort when you conquer it cuz of how complex it all is!

No kidding!! I was a planning master in 2016 when we last went, but all this new stuff is crazy. I feel like I’ve watched 1000+ youtube videos, read all the facebook posts, and yet here I’m learning even more!! I’m nervous to create a touring plan because it seems so difficult to master the timing of things. Esp. when we’re going on Spring Break when the crowds will be crazy!

I used my TP more as like a checklist. It does have the ability to add your return times for your LLs but you are going to spend more time on your phone whether you use it or just Genie than you ever had in the past. And you’re gonna wake up at 645am every day even on sleep in days to grab something for later. It’s not my favorite way of doing Disney but it can be done. We did both Universal first with EP (stayed in Portofino to get it) and then did Disney and I was never on my phone at all at Universal except to mobile order food. At Disney I was on it all day long. You’ll feel that difference (and bring a backup portable charger!)