I’m probably being a bit dense - but I’ve been trying to do a plan so I can make my FP+ bookings (which are disappearing before my eyes) but are these queue times correct? As in do I really need to bother with fastpass if the wait times are this short? 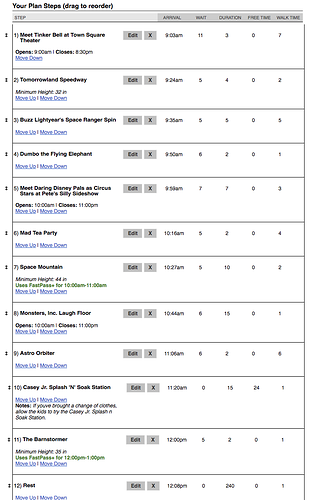 I cannot see what dates you’re traveling on, but it’s possible.

ETA: I’ve never not used FPP, even if it doesn’t seem necessary. Always good to have as “insurance” just in case something goes wonky and the plan is not working as it should.

You do not have to wait for tp to tell you which fastpasses to get. You can book them using logical information, and then plug them into your tp. If they are disappearing, and you are allowed to book them, book the good ones.

The predicted crowd level for wait times will depend on the dates you are travelling. Unless you are debating whether or not to book fastpasses in a different park that day, book your fastpasses for the rides that normally have longer waits.

I also think that the waits are short on your FP+ attractions (i.e. Space Mtn) because you ARE using FP+.

I’m not using their suggestions on the whole - and that was my theory, I’ll book for the longest of queues but some of them were saying 5 minutes so I thought that would be a waste to book it for but then I couldn’t book for example Frozen for 9 a.m. yet on the planner it reckoons it’s only a 5 minute wait but I don’t really believe the times it says,

Ok so I’ll just book anyway just in case. I did read another thread on the forum which said the queues were like 10 times what it actually says so now I’ve got worried.

I personally would book your FP’s first and then build your Touring Plan “plan” around that. I’m taking their “wait times” with a grain of salt. I saw on one of my planned days for AK they had wait time at like 1pm for Flight of Passage at like 55 minutes which I kinda find hard to believe. I have rarely seen wait times for FoP in the lines app under 90 minutes at any time unless it was really early in the morning or late at night near closing.