To camera or not to camera?

Starting to sort things for packing and I’m wondering about the wisdom of hauling along the full-sized (DLSR) camera.

Last time we went, cell phone cameras weren’t really a thing (as in, 320x240 images) so we brought along a full-sized camera and took some (but not a bunch) of photos.
Now, with both of us having smartphones that take decent photos, I’m thinking of leaving the camera behind so I’m not lugging it around 4 parks.

Alternately, I’m considering taking the videocamera which, while bigger than a cell phone, takes much better video with a usable zoom.
It’s my child’s first trip, so I want to capture some of that excitement.

Do you bring a camera? Did you used to bring one and now find a cellphone is up to the job of capturing your visit?

I bring a compact digital camera, the battery on my phone goes too fast when I’m taking photos. I’m not much of a photographer though!

I bring a camera in case I have a problem with the phone.

I used camera from my phone, combined with memory maker (photo pass)… Combo got all the pictures I needed…

Did you feel that the photos taken by memory maker were worth it? Did they really capture the moment? I’m trying to decide if it is worth the money to get it. I’m only going for 2 days but I the thought of not having to take any pictures is very tempting.

This is a personal preference. I always bring my DSLR.
Some days I may not even take it out, but I have never regretted taking it.
I would however deeply regret it if a “camera-worthy” moment came, and I for some reason didn’t have my camera there.
But then again, I’m the type of person who brings my camera when we go hiking in the woods as well…

I know many people LOVE Memory Maker but I’ve gone the last two years without it - but I had the chance to look at the pics on MDE and I didn’t care for any them. I only purchased ONE pic - and that was from Everest. That wasn’t even a good pic but it was a memorable ride with my 5yo son so I wanted the pic for a keepsake.
I’ve brought my DSLR both times. My husband and I took a lot of pics with our phones but I was happy to have my DSLR.

I think for 2 days Memory Maker is not worth it. They mostly capture character greetings. There are some other shots, like arriving parks, and some rides (like 7DMT), but that’s it. If you’re there for a week, it’s totally worth it because you get SO many shots included.

As for the full size DLSR, I did not bring mine on my most recent visit an relied on my phone camera. During the day, that was fine. But I’ve yet to meet a phone camera that takes good dark/night photos, so I was sad I wasn’t able to capture them properly. As someone else suggested above, bring a compact digital camera with optical zoom (I also didn’t like having to digitally zoom!) Most compact digital cameras also shoot video, so you’d be covered there too.

Just remember to HAVE FUN and don’t spend too much time behind the camera.

As this is your first trip with your child I would go with Memory Maker. The shots can be a bit ‘framed’ however we’ve found that as long as there’s no line the photo-pass person will take and many shots as you want, anyway you want. If I’m riding with the children my wife will find a photo-pass person and have some photos, etc etc, you get the idea. The other thing I’ve noticed is that when meeting characters the photo-pass person will try and snap ‘off the cuff’ moments as well, I started to ask for this as soon as we approached and last year we got some good ones from it.

I took a camera last year and took it to the park once, preferring to use our Android phones, the photo then auto load to Google pictures and we share instantly with our family group on Google+, we don’t even have to think about it. The phone is more instant that a camera and I guess the DLSR comes in a bag which will need to be searched, just take a battery pack with your phone.

Although phone cameras have plenty of megapixels, their lenses are terrible, and it is the lens that makes the image. Also, phones are not good in low light conditions because of their limited flash. Take your real camera with you.

I think for two days it’s questionable… Absolutely loved having it … Depends if you are going to seek out the photo pass people. It is easy to find them and there are plenty in parks. I loved the “magic moments”… They added Tinkerbell, Olaf and the ghosts from the haunted mansion to our shots. Also the video clips and when I downloaded I got a zip file of stock Disney photos that were from all the parks. I really like having it…

Bring it all. There are different uses for each one. As folks have mentioned, phones cannot capture low light shots, and that would include certain restaurant settings.

We each have Android phones with decent cameras.
We have used an Olympus Pen and Olympus OM-D, the latter being the more versatile. It takes good video as well as stills. Sounds like you have a separate camera for video, bring it.

And, we also pre-purchase memory maker so we don’t pay full price at the park. When we do this though, we are conscious about maximizing it. Get those shots at the entrances of the parks, and anywhere else you see them set up.

If you start to feel bogged down by all the stuff, maybe just bring the video camera when you know you’ll want to record something. And, maybe trade off with another adult so you get in some shots too.

I was not enamored of the Photopass photog photos we’ve gotten. We only tried them for some photos; character shots were OK, but the ones I had on my own camera when I handed it to the photog and they took them for me were just as good.
But the one photo that really annoyed me was the one we really wanted: walking down Main Street on an early ADR day to Cinderella’s Castle we had a Photopass photographer get a family shot of us on an empty street. When we looked at the photo online after the trip, they used NO fill flash on any of the shots they took. So the background looks great, our faces are hardly visible.

I like to take random family action shots walking through the day and phones are not great at moving things. I didn’t want to carry a full size camera and gear, so I bought a Canon Powershot SX50 HS (about $260), a belt bag and a neoprene wrist strap and was able to carry it comfortably or pull it out quickly if needed and got some truly terrific shots.

The zoom on it is fairly incredible and the movie mode takes great video. After almost 3 years of use it has been an excellent compromise for me - easy to carry with very good results. (See my profile pic here for one of my favorites…)

You are 100% correct. Everyone gets hung up on megapixels but ignores the difference between a lens assembly that is 2 inches in diameter and one that is 1/4" in diameter.

As a semi-professional photographer, I could not imagine NOT having a DSLR with me for the kind of photography that I like to do. Cell phone cameras have come a long way, but the picture quality difference between my iPhone 6 and my Nikon D300S is night and day.

Now, if all I was taking were snapshots of my kids standing in front of various landmarks or eating ice cream cones or standing next to a character, then the quality from a cell phone might be enough. And if you just want the “quick pic” to post on FB or IG, then the phone is perfect. But for real photography, you need a real camera.

Different people will (and do as seen above) have different takes on this. For me… big no on lugging the DLSR around. Memory Maker is a question mark… we liked it, but it has to be a share (not full price).

't really a thing (as in, 320x240 images) so we brought along a full-sized camera and took some (but not a bunch) of photo

We both have decent cellphones and we brought a DSLR with a great new lens. It got heavy so we stopped taking it to the parks. The phones were great (and we are photo snobs)

I just ensured that I had plenty of room for videos and used just the phone. Worked out great for us.

I like having both my DSLR and my cell just so I don’t miss anything! I also love having the MM.

I always bring my DSLR to DIS and take it to the parks nearly all the time. But it’s a hobby I enjoy so I like just shooting random detail shots of DIS etc. We usually get MM as well, but we spend a week so we end up with a lot of shots and that way I get to be in a few. There were a few days where we park hopped at night and I left the camera in the room and it was a liberating feeling to be able to skip bag check though…

I’d boil it down to - if you’re a serious photographer, take the DSLR as there will be times you’re thinking “I’m missing shots” if you don’t - if you’re just looking for decent family pics to preserve memories, a camera phone is likely good enough. YMMV of course…

Just to expand on my answer, IF you are going to be mainly taking photos outdoors in broad daylight, then a good phone camera will probably work well. But if you want to take some nighttime photos, or indoor photos in less than perfect light, then you will want to take a real camera. 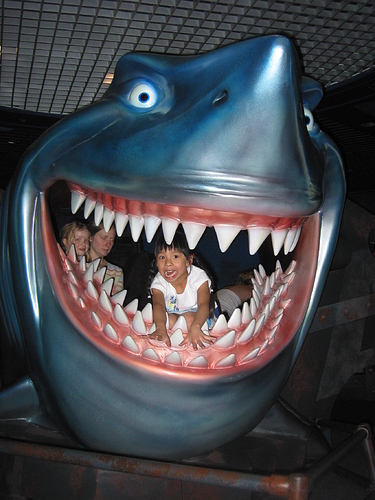 Now here is an attempt to recreate the photo in 2012, taken with an iPhone 4S: 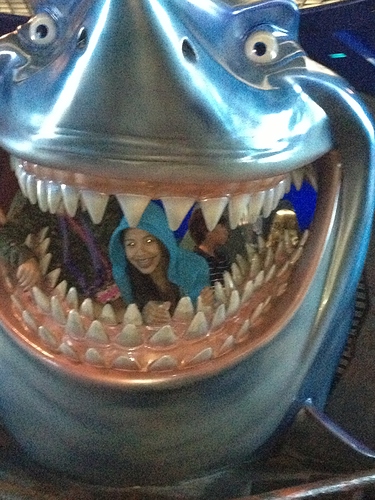 I realize that the iPhones have improved their cameras since the 4S, but not that much…