I’ve been thinking about Disney’s decision to do a phased opening of SWGE. The short of it is, of course, that I see it as a “money grab” on the part of Disney. Now, that phrase definitely has negative connotations…but I don’t really mean it necessarily to be negative. Disney has spent a HUGE amount of money to bring us all what might quite possibly be the most immersive experience ever seen at an amusement park. As such, I think they have every right to get as much money as they can from it.

But from a more detailed perspective, I was thinking about how, at first, it seems odd to open SWGE early with only one ride. But then I wondered if this actually might be more beneficial not just for Disney’s pocketbook, but also for guests.

If SWGE opened all at once with everything ready to go, it means that EVERYONE who is waiting to see it will try to descend upon the park at the same time. This would cause the nightmarish crowds everyone fears. But, what happens if you open up PART of SWGE? I think you will definitely have a lot of people deciding to come. And, they will be deciding to come just when Disney faces what is traditionally one of their lowest crowd time periods. This means that Disney has room to accommodate extra crowds in a way they couldn’t at a busier time.

And yet, I can’t help but think that not EVERYONE who is anxious to see SWGE will want to come down until it is completely done. So, the crowds coming to see it will likely be significantly less than had they opened everything. Instead, you’ll get a big increase, but with others waiting. And then, when they finally open phase 2, you have those who already came for phase 1 who are now satiated enough to hold off coming back a little longer. This means that those who did NOT come for phase 1 will show up, but once again, not EVERYONE who would have come at the same time had they opened everything up at once.

As a result, phase 2 crowds will be high as well, but NOT AS HIGH. It balances the crowds somewhat. But then, after the initial phase 2 rush, you will start to see the phase 1 attenders wanting to return to see phase 2. As such, Disney ends up with SOME guests who come twice instead of once, all the while lessening the crowds.

This isn’t to say things won’t be busy/crowded/overcrowded. Only that it should help SOME. So, perhaps instead of making the crowds a Christmas CL10, it will just be a Spring Break CL10, or something like that.

I also read that it looks like MMRR will be opening later than originally thought. This might be intentional as well to help spread out the crowds more.

As much as I know people are disappointed at SWGE interfering with their overall “calm” trip plans in Septemberish time frame, I do think that OVERALL, this may have been a wise(ish) decision on Disney’s part, not only for themselves, but also for guests overall.

I would bet that they also want to get it open as early as possible to have the maximum time in between SWGE opening and all the new attractions coming in 2021.

Just think what would happen if it was delayed until mid-2020. How many people would say, you know what, lets wait until next year, then we can see everything Disney is going to give us for the next 10 years. Opening early will ramp up the crowds in Fall 2019 and probably keep them high through 2020. Then when 2021 rolls around, plenty of people will come back for the 50th anniversary.

This is exactly the kind of level-headed viewpoint I needed to hear.

I’ve been in bubbly excited planning mode for months now, and ever since the announcement on Thursday, I think I lost some of the sparkle in my excitement. Just booked my ADRs today and it didn’t give me the buzz I was expecting. As much as I’ve tried to keep positive about SWGE being open while I’m there Sept 7-21 I just hate all the unknown quantities that we really won’t get answers to until it’s actually open.

But you’re absolutely right - as far as crowd levels go they couldn’t have picked a quieter time of year. All we can do is hope that a large portion of fans hold off until both rides are open.

What I would love to hear is for Disney to have a separate temporary entrance to the park for guests visiting SWGE, just for the first few weeks or so. That way guests who weren’t expecting it to be open and are happy to give it a miss completely can visit the rest of HS will less hindrance, and fans who are there soley for SWGE can be funnelled to the part of the park where they want to be.

@ryan1 i was generally thinking the same thing. They have capacity for increased crowds (hotel space). They get sales of merch, etc. They get some ROI. If everything opened at once, the CLs could blow through the roof and cause gridlock and unhappiness everywhere. Phased opening makes sense. Although I wish the first phase was after my trip

I found it funny, SWGE is opening on what used to be the very first CL1 day for the “fall”. I get the opening before Labor Day to pull in those guests.

The decision was apparently a strategic one. Good PR to be opening early, no doubt spread the crowds somewhat too.

The issues with Rise of the Resistance are said to be just the usual kind of minor glitches with the technology. And insiders over on WDWMagic are suggesting / hinting that it’s opening won’t be wayyyyy into the future, still probably “Fall”. My guess would be between Halloween and Thanksgiving, but that is a pure guess. 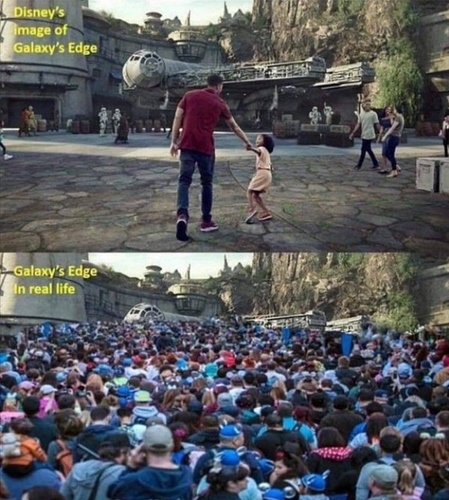 Saw this a while back, finally found again to share here. Seems about right. …

I just can’t imagine how they won’t have a separate entrance if rope drop for TSL has people pushing and shoving and running around the cast members! It’s crazy to think they would in any way shape or form be able to control all
Those people by walking them in like they do now.