The weakest solo trip report of all time

Let’s start by saying I suck and took almost no pictures today. Wasn’t feeling it. Dunno why, probably something to do with the lack of enthusiasm that wasn’t there at the start.

In fact, the first picture taken was the one in @OBNurseNH’s thread (which I can’t link here cause I’m only on my phone and it’s a pain, so look it up y’self).

I did take notes though. Wanna see a stream of consciousness that looks like a cracked out monkey? Of course you do.

——-
Woke up at 1 am to zippidy do dah.
Got ready and about 2-2:15 leave the house. I know I have plenty of time, but I am not looking forward to the airport experience. It’s not that I hate flying, I don’t like waiting.

Get to the airport parking and things are going a little confusing. I prepaid, but my ticket isn’t registering as it has in the past. Per the employees, it’s never worked. I’m now worried I’ll have to pay again.

Turns out I was using an old card on my phone to try and get it to work, and I didn’t realize. So now I’m stuck using paper ticket that they gave me. We’ll see.

Driver a bit rude about it. Not interested in helping with bags. No tip.

Get to airport and I really like the SW Automated terminals for getting your pass and checking your bag. Very convenient and I’m checked and through security by 3:35(arrived at around 3:20)

Walk around a bit, sadly nothing is open except some overpriced restaurants. Already had a bagel and coffee this morning, so I’m good.

Finally go sit and wait. Class trip shows up. Looks like a senior trip based on the matching T-shirts. Very glad I’m boarding before that horde. Has to be 50 of them. Not a magicband among them. They all take up positions around the line-up area though. I have a hard time believing they all have preboarding. But then they might be registered as a special case. Ugh; I hope not. I’d hate to think I bought a preboard and this group gets priority.

Flight departs at 6:25… way too late in my opinion but it was the earliest I could get. Starting to see dawn break Before I’m even on the plane.

Passed the time by reading forums and planning my World Showcase food. Looks like I’ll only be spending around $60-$70 total. Rather surprised.

It’s cold here in philly, so I’m wearing jeans. A quick look at the weather reveals this is gonna be bad as it hits 90 or better today. My shorts are in my suitcase. Hopefully it won’t be all that long before I can access them.

Turns out they didn’t, but i ended up getting researched for some reason. Which caused a delay and I ended up with a seat next to the engine. But it’s still a window seat, so I’m good.

Flight leaves on time. All the kids have calmed down now that we’re in the air.

Landed around 8:30, and got onto the me with little difficulty.

To my surprise, I’m the 2nd stop. Wl was first. Contemporary we 3rd and poly 4th.

Immediately went to confectionary. Got a Mickey cookie. I swear he said 9.48.

Walked out to dapper dans.

Hit everything on my list until after 2pm and it’s only 12:43. Skipped space mountain as my eyes aren’t seeing the star projections.

Got a sweet cream pretzel from lunching pad. I like. But not $7 like. Good amfor a snack credit though.

Rough out here in long pants and heavy pack. No word on room yet.

Sat almost immediately, couldn’t decide so I went with pot stickers and the recommended cheddar crisp burger. Very good, but very filling. I couldn’t win. Left about a 1/4 the burger. I am sad.

After that, decided to check in on forums and saw @obnursenh was in MK so I figured I should meet up.

Getting to the monorail, cast members decide to test out the worst dad jokes based on Star Wars on me. Cute, but I didn’t know how to respond, so it was awkward.

Got on monorail and into MK and met up with @obnursenh and family. Couldn’t have been a nicer group. Though clearly the kids were like “wtf is this guy?”

After that, I decided to hit up 7dmt, but before I did, I got a text that my room was ready. Woo hoo. Close to what I wanted.

Then headed over to hotel to shed gear. Now free of 3-ton backpack and long pants, I went back to MK to do pirates.

By then it was dinner time.

Eating a plaza restaurant. I remember from the last time mom ordered a huge salad. I think that’s a good idea.

Semi right. Not that huge, which was good as I wasn’t starving, but heavy on the vinaigrette (and even heavier on the vinegar). No shakes (learned my lesson).

Took forever to create a salad though so I ended up eating/watching the beginnings of HEA. They don’t pipe the music into the restaurant. It’s weird seeing some of the projections and fireworks with zero audio context. Diners next to me made the same comment.

After finishing up, Left and got ice cream at plaza parlor. Hea still was going so it was in and out… and then a struggle to figure out where to sit.

Sat in the “runoff” area where the impending crowds will go.

Ice cream is go— holy crap Tink flew! I didn’t think she would with the wind.

No idea what it was about that, but suddenly goosebump central and good mood kicks into high gear. We’re in Disney.

After hea, I immediately realize this is a bad place to be and find a spot between the confectionary and the hat store and finish my ice cream as the mass exodus commences.

Kinda giggling that I’m not that mess. I look at my plans for the day and see I’ve hit everything, just shy of haunted mansion and the carousel (for mom.)

Finish up and start to head toward HM after a few minutes.

Whoops, crowds aren’t done. Swimming upstream and it sucks. Eventually make it and it’s walk on to HM.

Get done and come out to a teenager crying. She was terrified in there. Wow. I feel bad for her.

Next up, carousel. Final ride of the night. Fitting.

After carousel walked around until kiss goodnight plays.

It plays and Day is officially complete. Back to the hotel.

Get back to room. Dark. Ew. No electric water pageant. No park lights.

Eat them on balcony. 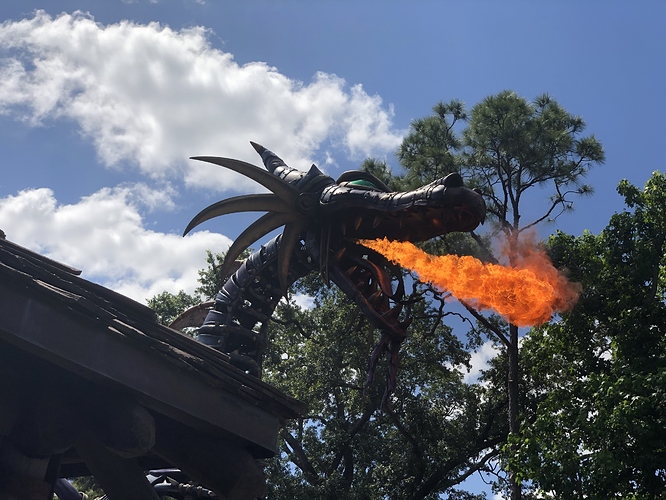 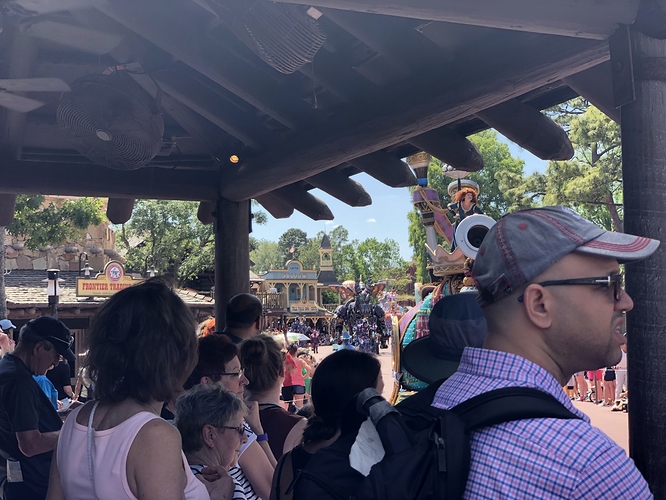 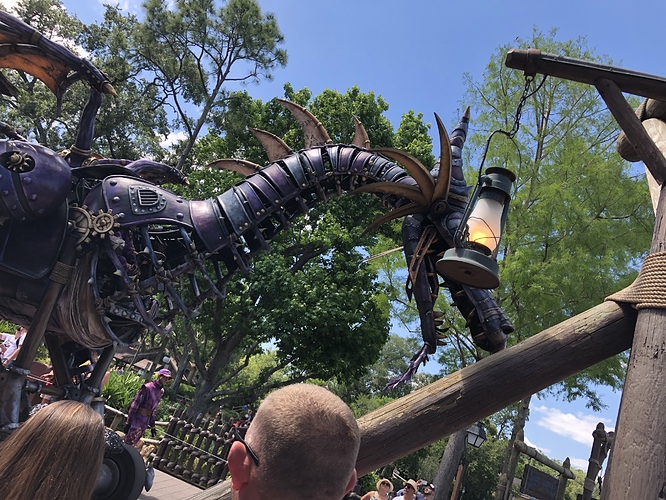 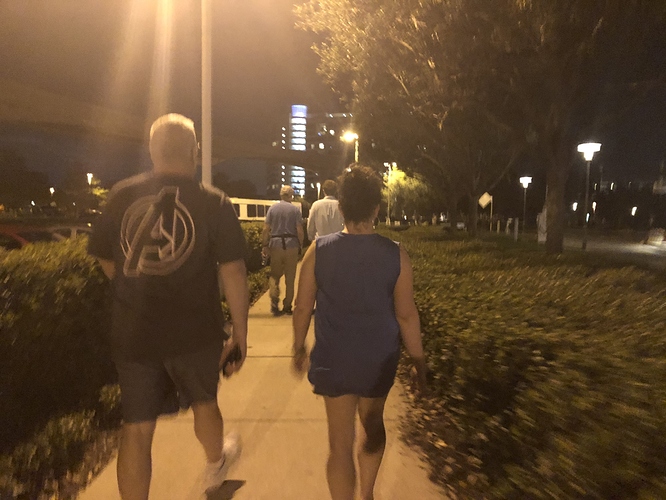 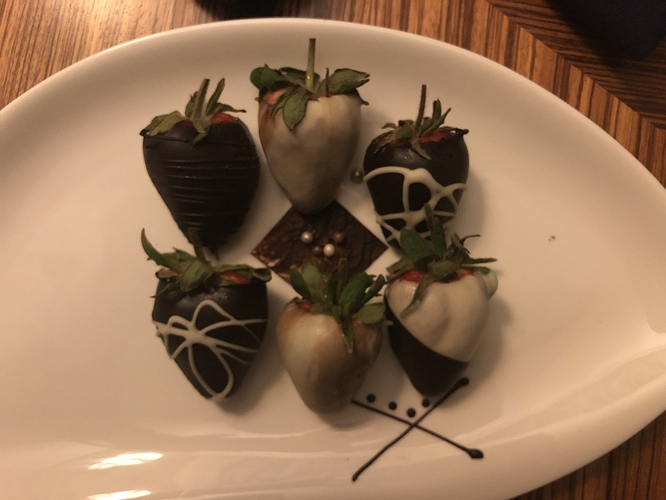 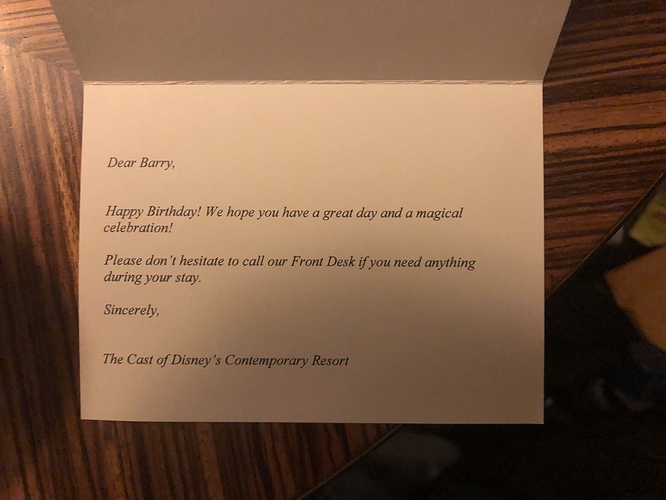 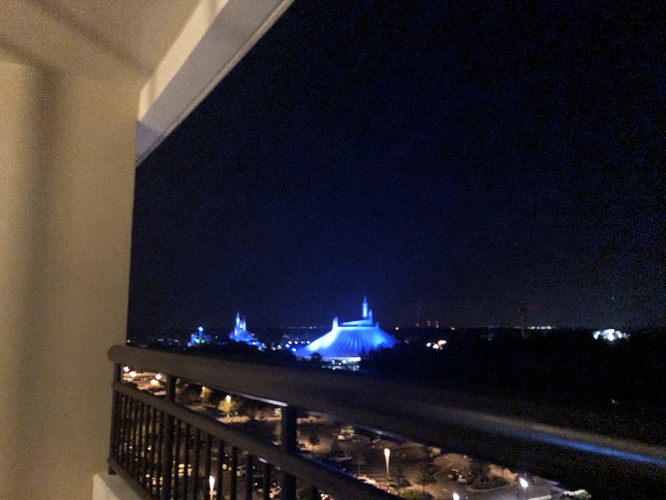 Can’t quote for some reason but kids were not “wtf” LOL. They are used to meeting up with my not-so-strangers

Wait - why are you eating Barry’s strawberries??? I thought your name is Randall…

They put on a brave face, but there was definite “who the f—-“ in their eyes. I know, because I had that a LOT these past few months.

Uh as far as the name thing. Short version is I go by my middle name, but DVC doesn’t like that.

That’s the first thing I thought! Who’s this Barry person?

Oh and to be fair… I actually don’t know YOUR name. You introduced everyone… but you. Hahah

Her name’s Barry and she wants her strawberries.

So funny. I forget that people don’t know my real name.

Is this a birthday trip? Did I miss that? Happy birthday!

No idea what it was about that, but suddenly goosebump central and good mood kicks into high gear. We’re in Disney.

I cannot tell you how happy I am to read that! 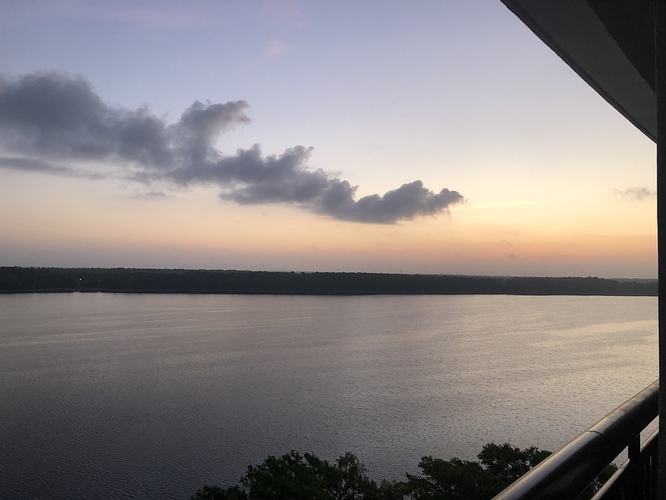 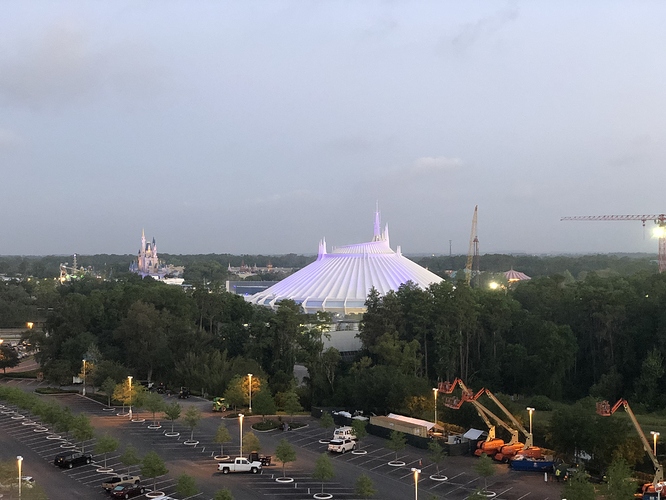 Sorta a semi-birthday trip. I won’t be back by the time it’s my real birthday, annnd it woulda required a lot of explanation for anything else. Soooo figured this was the easiest.

Lake views definitely have some advantages 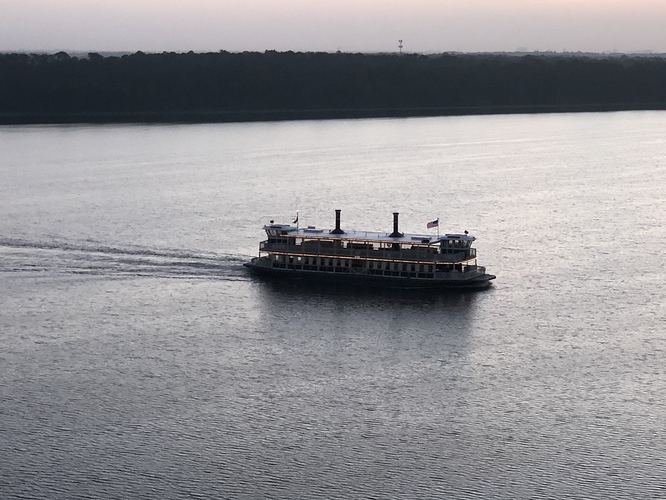 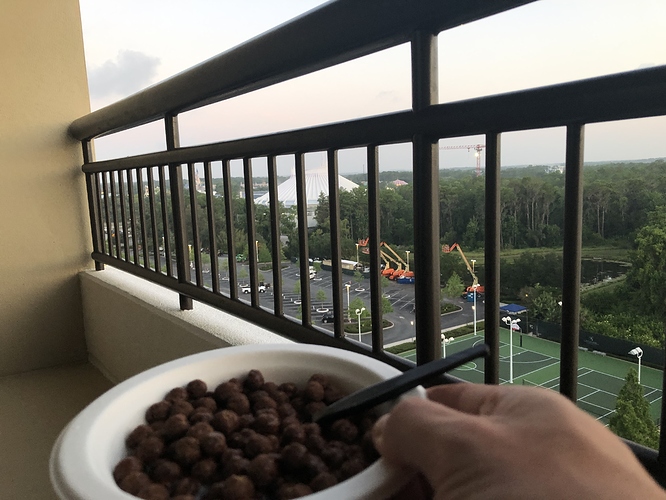 Thanks, but they don’t. I’m not a drinker.

One of the more noteable things from yesterday. I’m in line for PoC and we’re at seat sorting. Behind me are two highschool-aged guys, had to be no more than 17. And you knew this by how they described space mountain to each other earlier in the wait:

“It’s like… space. I dunno. (A long pause follows) It’s like a roller coaster in space.” (Our fabulous future, ladies and gents) anywho, the two guys were nice enough, but also had never met someone who was a solo traveler in Disney. (Or at least not another guy).

So while we’re at sorting, the one looks to me, real nervous. “This might be too personal a question so you don’t have to answer, and I’m sorry if it is too personal, but … are you here alone?”

I smiled and said “yup. “ and you shoulda seen their faces. Like they just saw a heffleump. Clearly They weren’t expecting me to say yes. and went on to ask a few questions about why and comment of how that sounds “awesome” and what not.

The expectation that Disney isn’t for solo travelers is still very much there it would seem. Which i actually forgot given all the recent “solo trip reports” and declarations of people going solo here of late. Especially if you’re male. Just thought that was a funny exchange.

It was. More and more the biggest downside is the airport idiocy. Also, is there a fight club at southwest? Where they use your baggage as training gear? My stuff comes back more and more beat up every time. I know the running stereotype is that they aren’t gentle, but c’mon! I’ve had UPS packages delivered with less bruising. 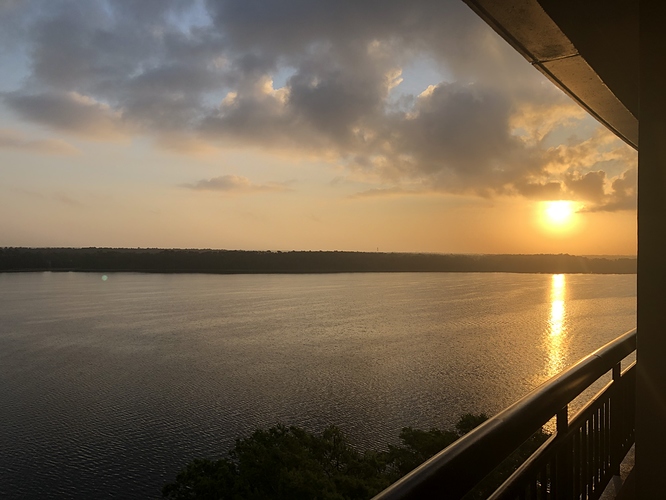