I’ve been waiting and waiting for this release and Amazon finally has it, but only in paperback. Any idea when the Kindle version will be available?

Ok, am I posting in the right area to ask this question?

Also, does anyone know if the Color Companion is also updated yearly? http://www.amazon.com/The-Unofficial-Guide-Companion-Disney/dp/1628090286/ref=pd_sim_14_14?ie=UTF8&refRID=0DZPCVC726625GRHSANM

I wanted to buy both, but am wondering if I should wait for December for the second one to be updated.

@len can you advise?

Kindle should be out within a month, and I’ve already got the first update for it almost done. (Here they are.)

The Color Companion is updated every other year, and we’re scheduled to have one done for later this year.

Thank you, Len! I can’t wait to buy both! It was a tease to release the paperback first! lol

Kindle version of 2016 guide UG is out- just bought it. I bought the paperback version as well- but am glad to have a lighter, more convenient version with larger fonts

I got my Kindle version!!! That reminds me, I should go write a review! 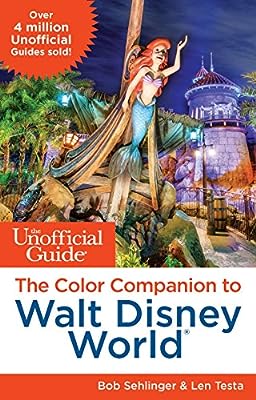 The Unofficial Guide: The Color Companion to Walt Disney World

Any update as to when the new edition of The Color Companion will be available? I’ve been biting at the bit, but I want to wait to buy the most updated book before our trip.

It should be out in early 2016 - we’re working on it now. Let me know if there’s anything special you’d like to see in it.

It was ready for January, and then we gambled that Disney’s Rivers of Light stuff would be ready early and we could put it on the cover.

I think we’re looking at an October date now.

I’m going to try not to cry. Really.

I’ll be ok. Since I’m going in September. I guess I’ll have to buy the out dated one.