Is there any kind of view from The Plaza for HEA? I just realized that we have an ADR just after 8pm at The Plaza and wondered if we could see HEA from there?

Should I assume no one knows or that you can’t see HEA from The Plaza? 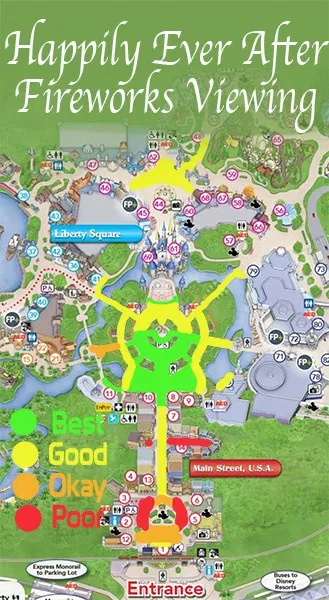 This from Disney Tourist Blog - best viewing spots for HEA - I don’t know exactly where the Plaza is in this pic. Maybe this helps

#8 is the Ice Cream parlor and I think #9 is Tomorrowland Terrace. The restaurant and patio seating is just in between.

Theoretically we should be able to see it from there.

The Plaza is actually #9. What I don’t know is if there are any/many windows that you might get seated at that could actually see the castle. It looks like a very narrow frontage that faces that way so I think you’d need to get hugely lucky to score a view table, but there are windows so there’s a chance.

My advice would be if HEA is really important, the ADR at the plaza is not a good idea - if it would merely be a bonus if you had a view, then eat up…

We were originally going to stay out of the parks the night of our Plaza ADR, but dd and I changed our minds and decided doing Sorcerers of the Kingdom would be more fun than hanging out at Disney Springs.

I didn’t think of watching HEA from there until after I got the ADR for a late dinner (originally wanting it a bit earlier)…so this would definitely be a bonus.

For further reference, Tomorrowland Terrace is #82 which is mostly covered by the yellow mark over it - it’s to the right of #9 in gray.

Thanks, I couldn’t zoom in enough to see it well.

I was somewhat cheating as I happened to have the same underlying map open which includes the secret decoder ring:
http://www.wdwinfo.com/maps/MK.htm

I can never remember which location is the Plaza vs. Tony’s for some reason & wanted to make sure…

I totally know where Tony’s is. Dd is a huge Lady & the Tramp fan. We’ve eaten there twice (meh) and had to take a photo of the sidewalk out front (footprints & heart) every trip when she was younger. She turns 17yo during our upcoming visit…I’ll have to see if she takes another picture.

Having eaten at neither is probably one reason I tend to forget which is which. For the longest time I thought Tony’s was located where the Plaza is for some reason. Right now our MK ADRs are a lunch at Skipper’s & dinner at BOG (different days) neither of which we’ve done before so looking forward to that…

We are repeating The Plaza because dd is jealous we are getting bottomless milk shakes w/o her and our dining choices are limited due to ds being super picky (pizza, quesadillas, pasta, or grilled cheese).

4 items, you’re lucky. My DS will eat nuggets, ( not tenders) and we discovered mini corn dogs.

he will also eat a filet Mignon, but I’m not buying him that at Disney.

Word of caution, The Plaza was the absolutely worst meal we had on property. I would put several counter services above our meal there. I honestly can’t remember if there were good windows in The Plaza to see HEA, but even if there are good windows, you will have a difficulty time fully seeing the projections on the castle because of the umbrella seating outside of The Plaza.

We are going there for grilled cheese and shakes. It is one of the few places in MK that has something ds will eat.

Thx for mentioning the umbrellas.

Sorry about that! I completely overlooked the grilled cheese and shakes portion and just honed in on The Plaza and had a bad flashback!

No worries. I may stray from the grilled cheese, but it is what ds is there for.

Sounds like ideal may be requesting the outdoor umbrella seating though. That should have an optimal view compared to inside. Of course it may also mean not having access to air conditioning so that could be a “Sophie’s Choice” type decision depending on the night…

WDWInfo just posted a horrific review of The Plaza, but the upside is that they were seated at a window w/ a lovely view of the castle.

We are still going…twice… because it literally is the only place other than BOG where we can get something for ds to eat. He only eats pizza, pasta, grilled cheese, and quesadillas (I know Tony’s is an option, but BTDT and won’t go back) and apparently flatbread pizzas don’t count as pizza.

Oh bummer. We planned to eat there one day too. But I planned to get corn dog nuggets at Casey’s fir Carter and bring them in. Hmmm, idk what to do now.