The good the bad and the ugly part 5

Day 5 in the park DHS 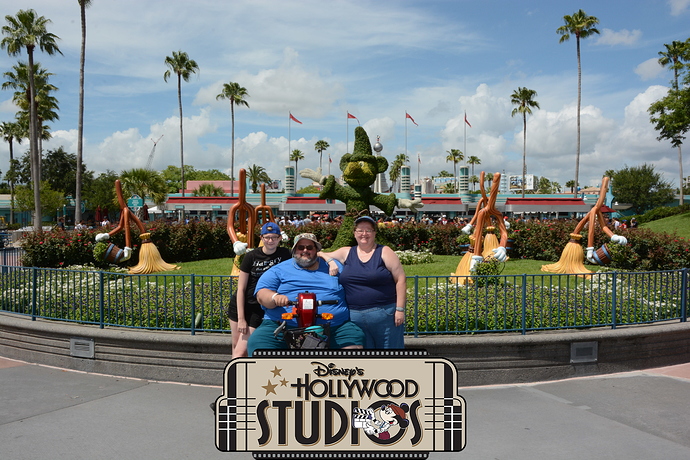 PhotoPass_Visiting_STUDIO_412176333201 (1).JPG6000×4000 2.98 MB
OMG we actually got here early this day. First stop March of the First Order. We are early and got to see the end of Star Wars :a galaxy far far away. We found a shady spot and started talking to two camera men who film the march and project it on the big screen. These are the CM that make Disney GREAT we had a nice conversation with them until the march started. After the march we watched Star Wars: a galaxy far far away in its entirety. 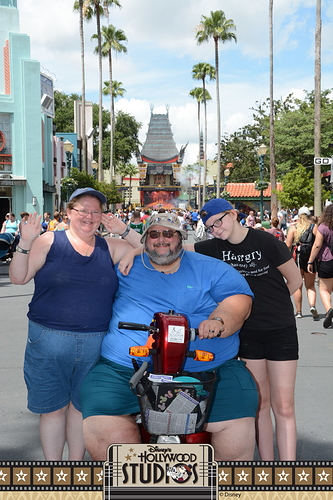 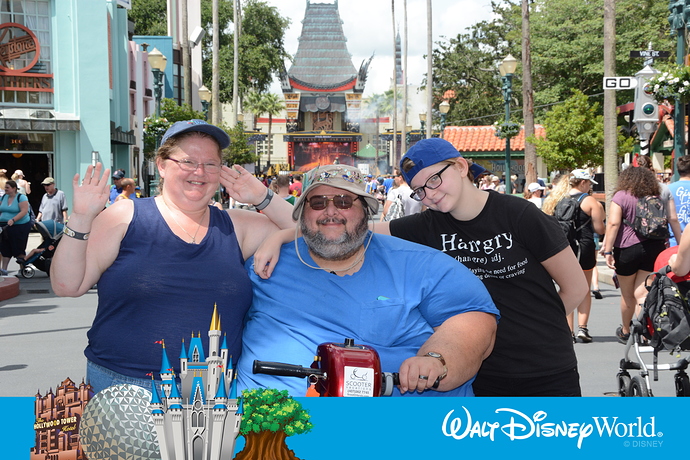 PhotoPass_Visiting_STUDIO_412177093530.JPG6000×4000 2.64 MB
Time for the Muppets we got in out of the heat but we must have just missed the show because we waa lone time. This is a funny show but not worth doing again. We had a FP for star tours I asked about the seat that the arm rest comes out for Pooh sized guests I was told no problem. We were asked to wait and when the guests got off we could enter. While I entered I asked about the arm rest seat because I thought it was in the back row not the front. I was told they don’t have a seat like that, but they had one that the arm rest swung out so you could get in easier. I looked at this and was like is this going to close. It closed and the seat belt fit we’re off yea. This was probably the most fun for me I wanted to go again. We were now so behind schedule we missed Beauty and the Beast. FP for Indiana Jones was next we were seated but the show did not start for 25 min. Then the skies opened up and winds picked up. Thank God we are under a roof. Yea right 5 rows in front of us the roof starts to leak. Ok not leak more like a pipe burst but it was the roof. No big deal we are safe and dry, except the water was hitting a fan and that was making things worse so poncho up. Living on the shore I’ve seen my share of storms this was hurricane like rain with 30 mile winds. They turned off the fan and canceled the show, but no one was leaving. Poncho up be damned they would not let us out they roped off the exit. 40 min latter it slowed down and we could leave. While I was sitting doing nothing I scored a FP for Voyage of the Little Mermaid. We get in sit down the show starts but I noticed something is wrong with the curtain it won’t open up all the way. Two songs in and they canceled this show. DD went and complained and got a paper fast pass. Still to early for dinner but who cares, off to Hollywood and Vine. It is still raining but the waiting area is somewhat covered and they also have umbrellas. We are seated in about 5-10 min about 20 min early. I have heard a lot of bad reviews about the food, but I can’t tell you why our food was good I would say better than Golden Corral. We got to meet the fab 5 Mickey, Donald, Minnie, Daisy, and my FAVORIT GOOFY. 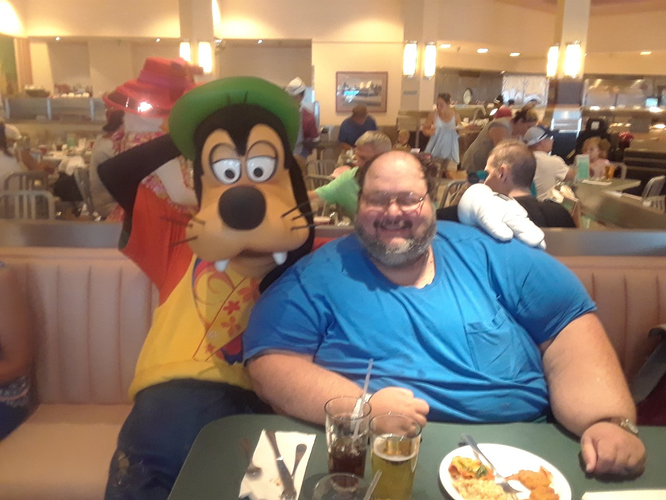 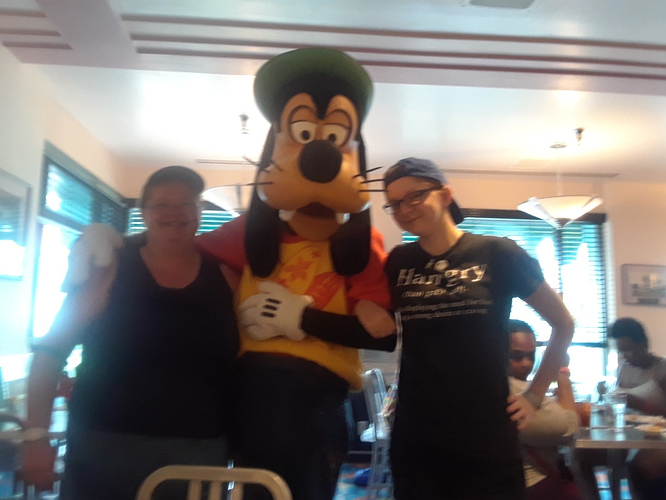 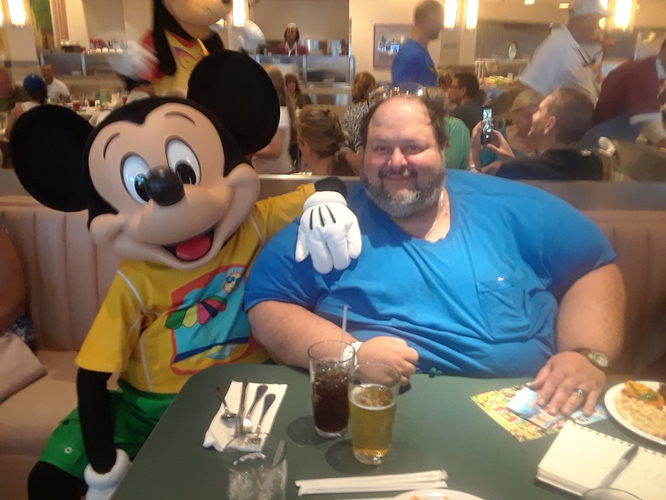 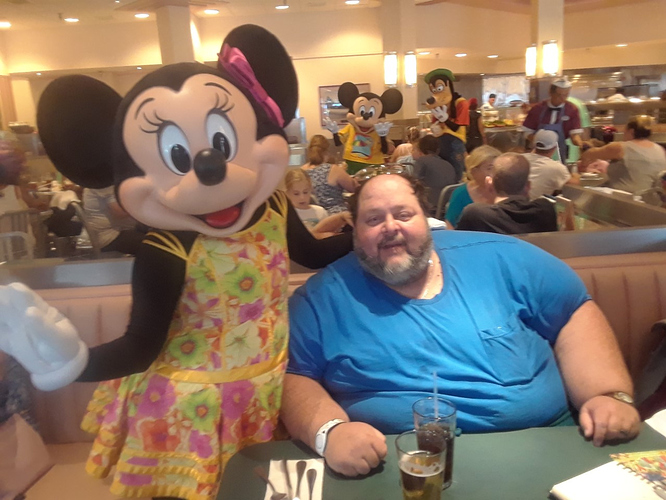 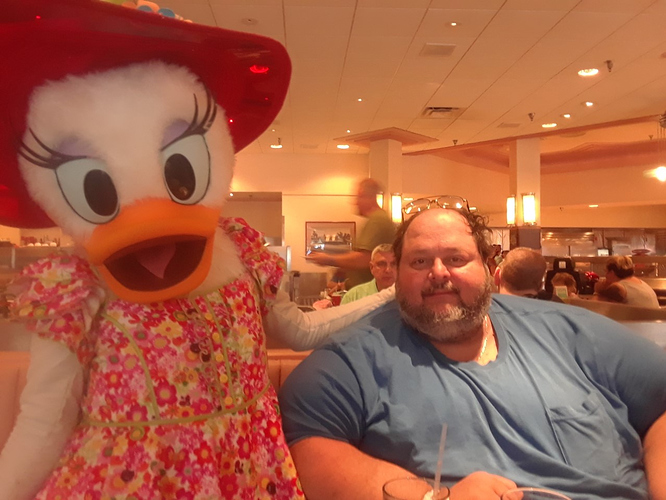 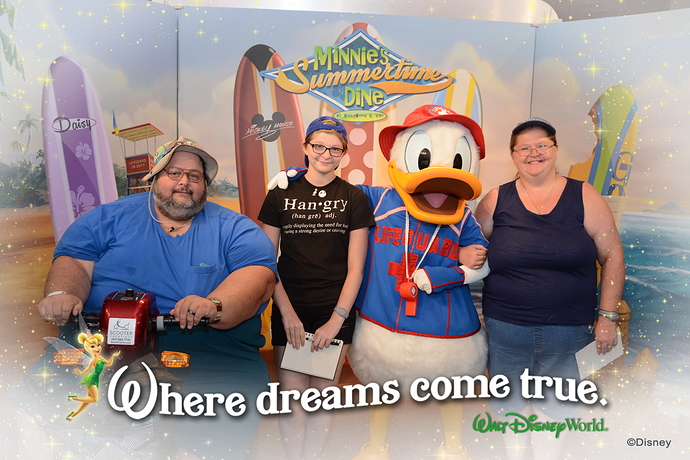 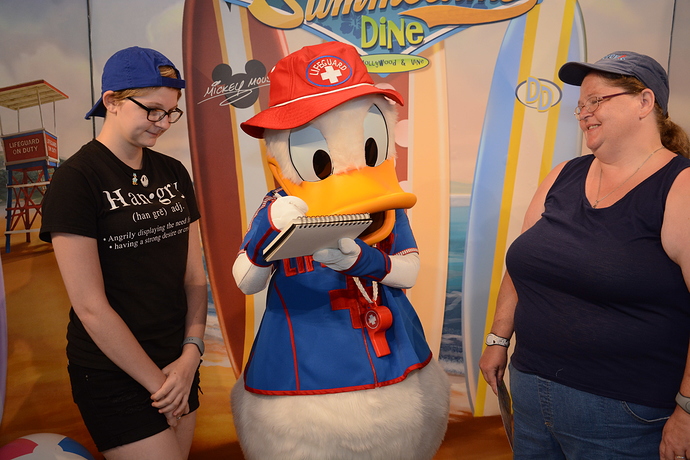 PhotoPass_Visiting_STUDIO_412182227367.JPG6000×4000 2.06 MB
Star Wars Launch Bay was next DD loved this when asked if she would join the dark side she asked will there be tacos. She was told that she needed more time to think about it. 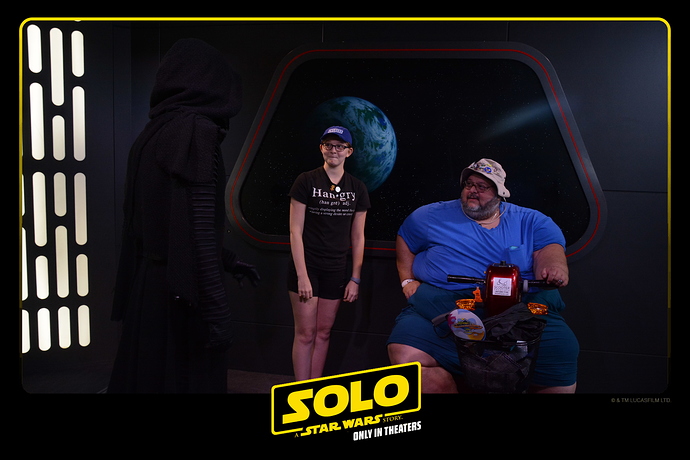 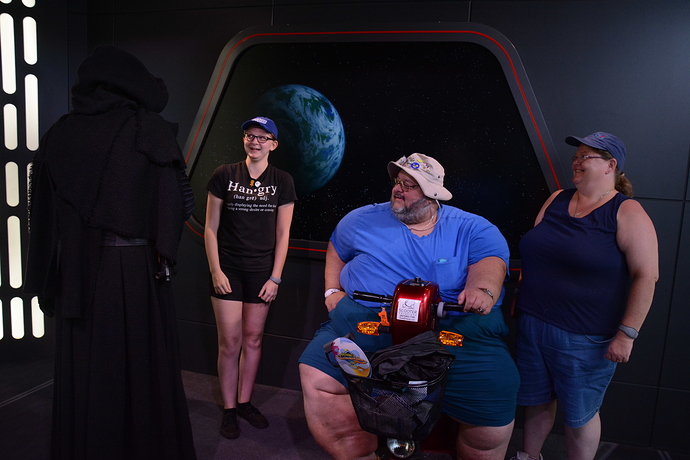 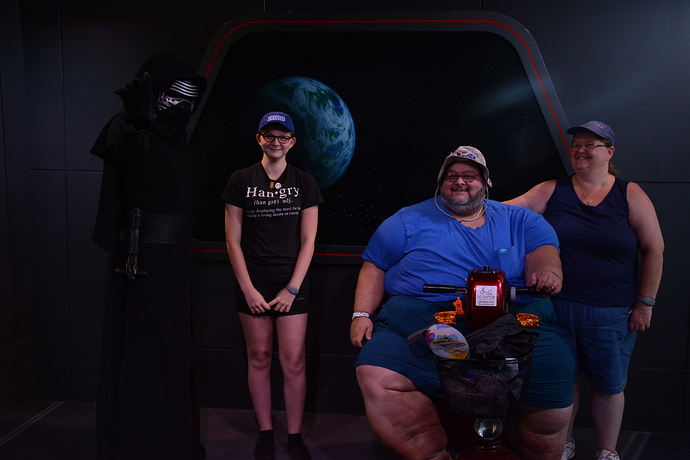 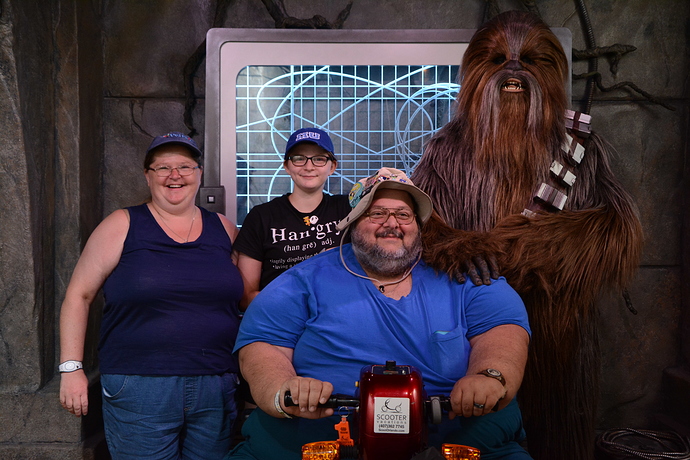 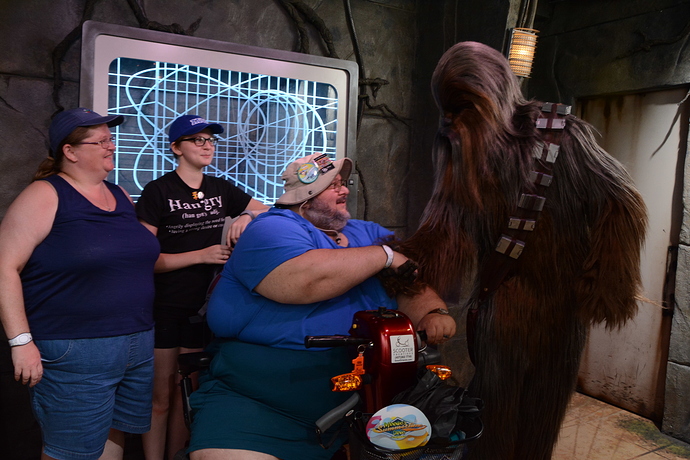 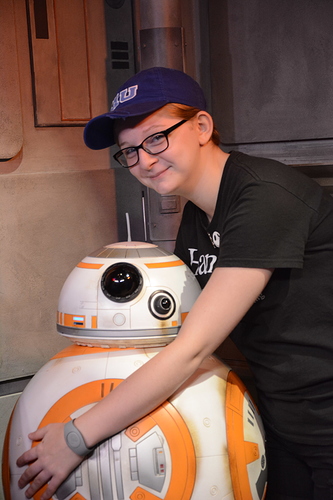 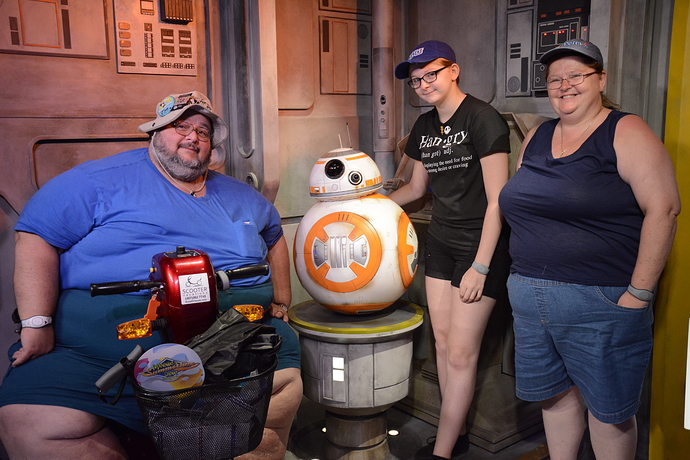 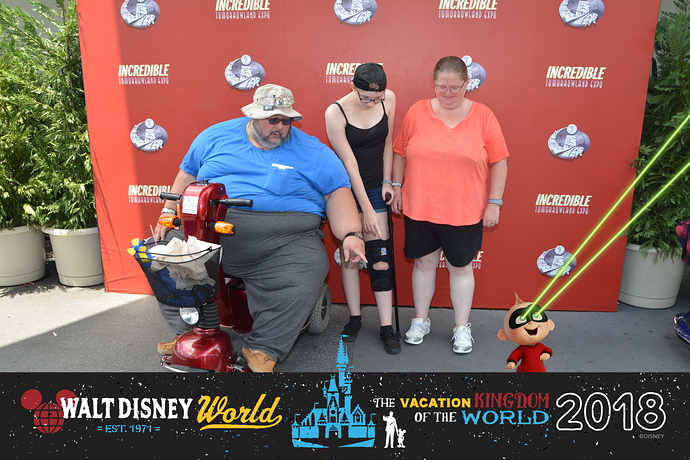 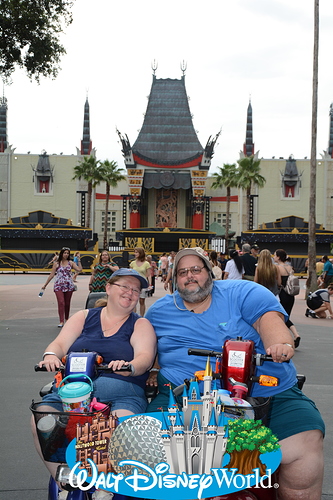 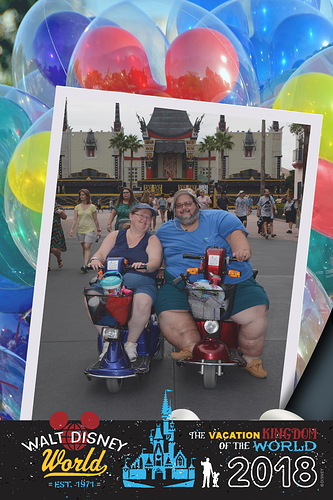 PhotoPass_Visiting_STUDIO_412184928647.JPG4000×6000 2.65 MB
Now it was time for Fantasmic I’ve miss this show the last 3 time I’ve been here. We had nice seats but it started to rain, so poncho up. The show was delayed 20 min and half way through it started to poor. I really am glad that we got to see this show it was great and worth the wait.
Now I’ve titled this The good the bad and the ugly here comes the UGLY.
After we sat down they put ropes behind us, no big deal right. Wrong after the show no one came to take the ropes down. DW had to take them down and while she was backing up the rope got caught in the ECV. Some nice man helped us free it. While leaving people are pushing and shoving hopping in front of the ECVs making it difficult to drive. When all of a sudden a lady on her ECV pulled out full throttle into me pinning my leg between her ECV and mine. What ever was on the back of her is now cutting into my leg. She just sat there screaming she did not know what happened or what to do. I had to scream at her to pull forward so to free my leg. The cut is not bad but I have
Lymphedema in my legs. This means my legs fill up with water, and if I have a cut water leaks from the cut and takes a long time to heal. I found security and a CM and they must have thought I was crazy to be complaining about this because they offered NO HELP. I them told them that I needed to go to first aid to have it looked at. First aid was great she understood what my problem was and was concerned about it leaking as well. She cleaned the cut and but some clotting cream on it and bandaged my leg. She gave me a ace bandage to wrap it when I got back to the room if need be with a bag full of cream and bandages. She told me she was going to let someone know that no one was helping people out of the HC seating. By this time the park is closed and back to Sports we go. When we got back to the room my leg was bruised but not leaking so I put on a new bandage and off to bed. We leave in the morning.

Next day my leg is ok no leaks but soor. Time to pack up and go. We pack up and are going to check out DW is going to the car because she is the only one who knows where it is. Plan is load up car repark car in the close lot get breakfast and use up 1 QS credit and 9 SN credits. DW gets to the car and it won’t start. I must have left something plugged in, now mind you she parked the car and went out to it twice while we were here. I asked the guy at the outside desk if they could help or should I call AAA. He said call AAA, so I find DW and I call AAA. 90 min wait I sent DW back to the lobby with DD, I’ll wait for AAA. I see security and try to wave them down no luck. AAA calls me he is on his way and I should go wait in the lobby. DW is in the lobby talking to the CMs inside. They told her to go back to the car and put the hood up and security will come and jump the car. So I tell her to take the ECV with her not to walk. Oh yea I’m also waiting for the ECV guy to come pick them up. Security gets to her 5 min before AAA (AAA only took about 20 - 25 min not 90 like I was first told) AAA driver gives her and security a bottle of water. She is told to let the car run for 30 min before turning it off. ECV guy gets here right after AAA leaves. I tell him the the other ECV is in the parking lot and if he wants I go out to the parking lot so he does not have to make two stops. He gets the ECVs and I bring DW back to the lobby so she can get breakfast. DD is already eating in the food court and I’m to upset to eat right now. She is only going to get something with the SN credit so I tell her to get me something and to have DD use the rest in the gift shop. I also told her if she wanted to get a photo album to get one and I was going to drive around to charge the battery. I drove around the All Stars to see what they looked like from the road. I went back and picked them up and off to the outlet we went. The only reason I told DW to get a photo album in the gift shop was because I did not know if they had any at the Disney Character Warehouse. DW got 5 shirts, a hat, a pin, and a picture frame for less then $80. Now we are about 2 hours late leaving Orlando but back to NJ I drive with stops in SC, VA, and MD. After leaving FL and entering GA the skies open up like they did on the way down. Finally get to our first hotel a Red Roof in get to our room and I finally turn the car off it has been running since it was jumped 10 hours ago. Next morning I go to start it and guess what, It started right up. 400 plus miles to go today with no problems and a free night at La Quinta. Next day short drive just outside Baltimore hit some trafic. Last leg 3 hour drive home Saturday 4th of July weekend lots of traffic 3 hours turns into 6 oh and a quick stop to pick up the pup from my parents house.

Thank you all for your help in making this a great vacation we had a lot of fun despite some bad and ugly spots.

Special thanks goes to @gamusicman for what you sent I paid it forward when I was able.

Special thanks goes to @OBNurseNH loved meeting you hope to see you again. Next trip I plan I will put aside time to set up a lunch, it won’t be for about 5 years for DW and my Silver anniversary.

Special thanks goes to touring plans and all the u-tubers I watched.

Good Night and may you never stop wishing on a star. Love you all even you @profmatt and I still owe you a boop.

Thank you for sharing your trip with us!

Special thanks goes to @OBNurseNH loved meeting you hope to see you again. Next trip I plan I will put aside time to set up a lunch, it won’t be for about 5 years for DW and my Silver anniversary.

Enjoyed your trip report and all the pics! Thanks for sharing with us!

Aw dang! I have a hair appointment that day

I gave you 6 days to choose from and I was going to offer to pay for you and MR OBNurseNH.

I’ll see if I can reschedule. My hairdresser is very much in demand, but I’m a favorite of hers so she may be willing to accommodate.

I love your H&V pics, especially Goofy. I’m so sorry for what happened to your leg and it’s terrible that the CMs didn’t help you.

Good that you made the best of your trip. I had llymph nodes removed and have to protect my right arm so I understand your concern. What a mess that was.

Special thanks goes to @gamusicman for what you sent I paid it forward when I was able.

You are most welcome! It looked like you guys had a great trip. I enjoyed following along with your trip reports!!! Glad you are home safe.