The good the bad and the ugly part 4

Day 4 in the parks AK 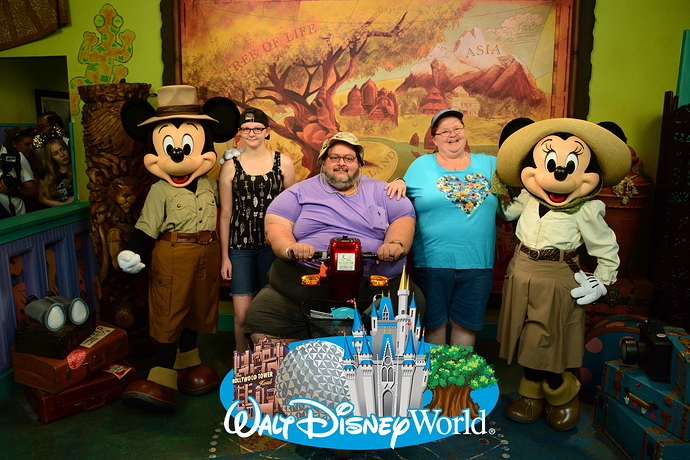 What a day we canceled our Ohana Breakfast everyone wanted to sleep in. DD and DW were up and out by 9am to get breakfast DD wanted Mickey waffles. They went to the food court but it was busy so they brought the food back. DD went back to sleep and DW wanted to go swimming so I got up and joined her. The surfs up pool always seemed packed so we went to the baseball pool instead. This was nice but there was a wrestling team in the pool but they kept to themselves. They were hourseing around and I was surprised that the lifeguards did not tell them to stop but they weren’t bothering others so I guess they were ok with it. After swimming we went back to the room and got laundry to do. While the laundry was washing we hoped on our ECVs and rode to All Star Music and Movies to see what they were like and to check out their pools. DW said she wanted to stay at Music next time but when we got to Movies she changed her mind again. So I guess in 5 years for our silver anniversary it will be Movies. I/we don’t see any reason to spend extra money on a room. Yes they are small but our king room with the wheel in shower was enough room for us we were very comfortable. We got back late and the wash was done so into the drier it went. Just enough time to take a power nap and off to AK.
First up It’s Tough to be a Bug. DD has arachnophobia and when the spiders came down I (being a typical Dad) tapped her on her shoulder. She jumped out of the seat, I’m not kidding out of the seat. I almost peed my self I was laughing so hard. When the bees stung us she was out of the seat again at this point I’m ready for Depends. I LOVED THIS DD on the other hand did not talk to me for 30 min. I guess I should have read up on this more, oh well. Now it’s dinner time I went to mobile order Flame Tree but it was only taking credit card orders not DP credits. So we went to stand in line DW went to park her ECV by the time she got back we had ordered and got our food. DD and DW ordered the salad with roasted chicken I ordered the ribs with coleslaw and baked beans. DD and DW both complained the salad had little to no dressing but otherwise was fine. The ribs were good but needed sauce luckily I was able to get some. We also had the French fries with pulled pork and cheese. This was not good the pork was hard and dry like it had been sitting out all day. We had a FP for KS. This was better than our 9am KS ride the other day the animals were more active. Our driver walked out with us she was done for the day she told us it is even better after dark. Ok next on this list was ROL but it was still early. We were going past EE and DD wanted to go so DW went we used a Golden fast pass I had gotten the other day when I had that problem with dinosaur. DW was scared by all the warning signs but she was fine and liked it. DD absolutely loved it see. 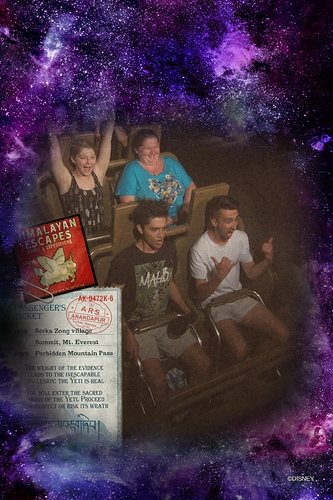 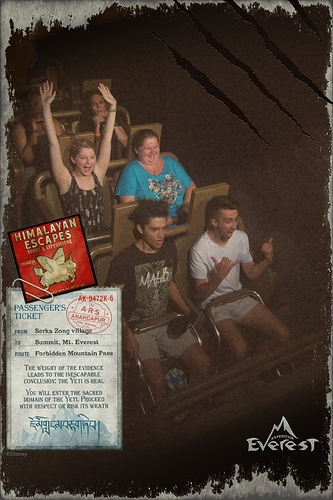 PhotoPass_Visiting_AK_412170202772.jpg1745×2618 1.07 MB
While they were on EE I road around to Dino land to check out the games. In the 90’s I was a barker on the boardwalk in Seaside Heights NJ. $5 a game omg what is this world coming to my first stands were $0.10 and $0.25. I got back just as they were exiting we decided to use the restroom before the show because I did not know if there was or is one there. We went to FP check in just to find out we needed to go to HC entrance. They sat us first row all the way to the right so basically first row in the middle. Of course it starts to rain so poncho on. My knees are killing me so the other day I bought some Bengay this helped out alot. We could see the skies light up with lightning and the dark clouds roll in. They kept saying that the show might be canceled do to weather. So when the show started 5 min late I was grateful. ROL is so worth it I like this very much. DD enjoyed herself also she was smiling the whole time she was even taking pictures with her phone. Seeing her having fun was worth the knee pain. It was getting late so back to the room we should go. But wait we still have to do Pandora at night, so we’re off. I wanted to stop and have some pictures done but DD would not stop she said later later. Her and DW went in at 9:45 I told them I was going to get some pictures taken. 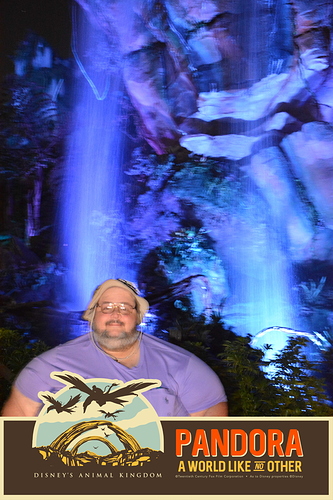 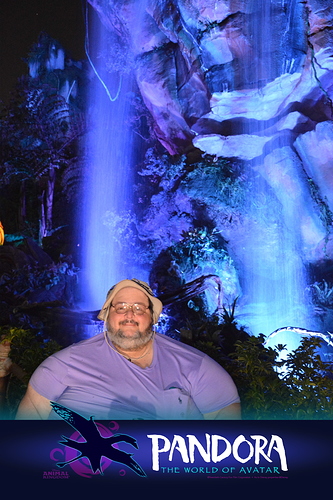 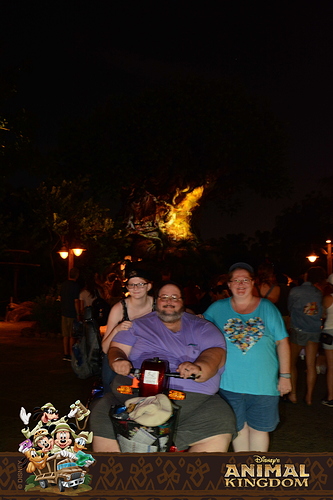 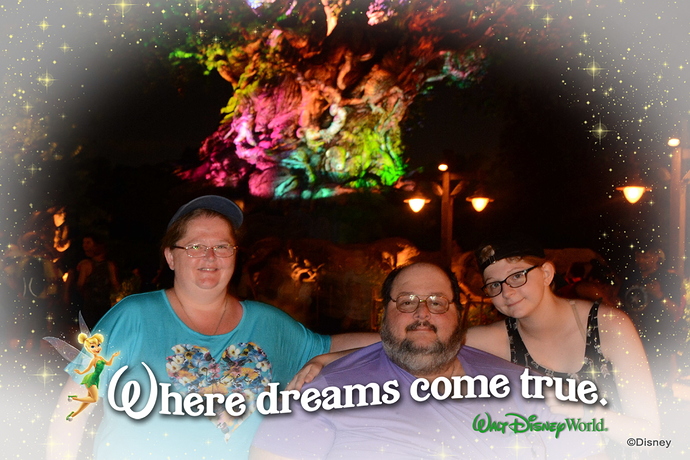 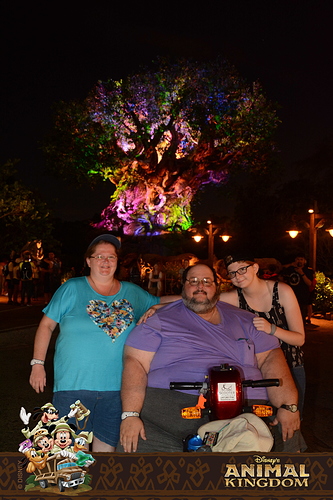 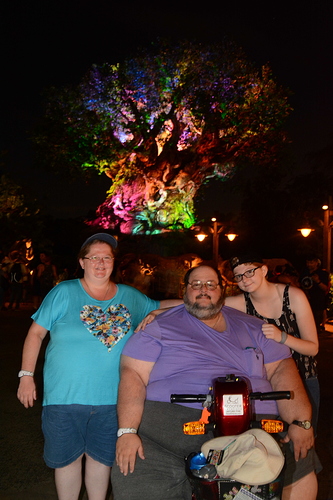 PhotoPass_Visiting_AK_412172921291.JPG4000×6000 1.75 MB
Because these came out better. This was our latest night, we got to the bus stop and there was one ECV already there so we had to wait for another bus. The bus finally comes and we get on. I give our Golden Fast Pass to a family because we can’t use it. I find out that the bus driver picked up everyone from all of the All Star Resorts. How am I getting this ECV off with all these people on the bus. He pulls into Sports and I have to get this ECV off and it was very hard with a bus full of people and no one would move. Most likely they did not understand the language so well and the bus driver was absolutely no help. You did not want to hear the language that was coming out of my mouth on my way back to the room. DW asks why did it take me so long to get back, she was already in bed. She did not like my language either. So off to bed late start tomorrow, yea we get to sleep in. I told everyone we are leaving at 10:30 for DHS but we don’t need to be there till 11:45 shhh.
7 Likes
missoverexcited July 6, 2018, 8:21am #2

Those Tree of Life photos are beautiful!

Yeah, ECVs and buses are not fun at all. Next trip we aren’t taking the bus anymore. We plan on driving everywhere. The only time we will ride the bus is if Gregg isn’t up to late night at a park. He’ll drive back to the resort and I’ll endure a bus.

Sounds like you enjoyed AK! The photos are great.

I know that a lot of people aren’t wowed by ROL, but we really loved it and are looking forward to seeing it again!

Loved seeing your DD so happy riding EE, and the family photos are wonderful in front of the Tree of Life!

This was the only time I/we had a problem with the bus. Unless you count the DVC bus/van, but that was because they sent the wrong one for us.