The good the bad and the ugly part 2

Day 2 in the parks EPCOT 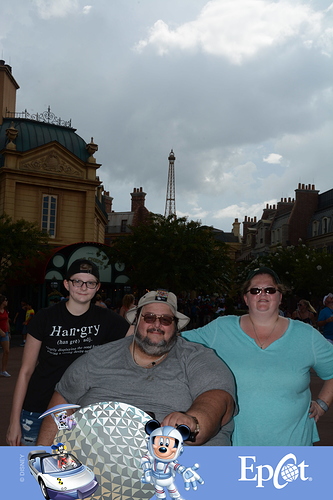 This day started out late but behind schedule only 10 min. First stop FP for SE HC entrance is along the right side when we get in we had to wait while they discussed my options because ECVs can’t go in the que. They don’t have a wheelchair that is wide enough only 18 inch ones which pinch me too much. Finally I said if they had hand rails I would walk it. I was thinking it was a long que, it was only about 50 feet no big deal but from were they stop me I could not see it. Then it was off to the SwNF then turtle talk these were both very enjoyable. Next was FP for Soarin this was ugly for me I fit in the seat but the belt was to short and they don’t have extenders like I was told they would. I was told I could not ride and was shown the door. I waited for my family to exit I was so upset that I told them that I did not want to know how it was. I talked to 3 CMs and was told I could not get my FP back I them told one CM that it was BS and he pointed in the direction of a supervisor who left for 10 min just as I got to him. When he came back I told him what happened and he gave me a paper FP with not even a I’m sorry or have a nice day, just handed it to me and walked away. I was so upset at this point I used my DVC FP for living with the land my favorite ride in EPCOT. They put me into the HC boat in the back so I had enough leg room. This was great I would love to do behind the seeds if we had the time maybe next time. Next was a FP for JIIWF. They have a car that allows you to stay on the ECV. This was nice but not as good as the original. At this time it started to poor. So we ponchoed up skipped club cool and headed to Mexico for lunch at La Cantina de San Angel. This place was jam packed no seats to be found but just as I was about to give up a door opened and there was a dinning room inside. I thought it was all out side seating here but I was wrong. I was trying to find a seat and was told I would have to leave my ECV out side but they just opened another section and I had room for my ECV. At this point I parked my ECV took off my poncho and put it on a table and ran for the restroom. Just then my family calls and wants to know where I was. I told DD to find the doors and come into the dinning area. I got back to the table and they just got there. DW had the taco salad I had the beef taco and DD had the taco sampler beef chicken and fish. She traded me the fish for a beef. Everything was good but the fish was just ok. We sat a dried off for a while but the rain did not stop. So poncho up and off we went to Canada and O’Canada when we got out it had stopped raining for now. Went to UK and Marry Poppins was there but it was so hot and the line was too long so off to France and Impressions de France I tried to get to the bakery but it was packed so I sent DW and DD out to look around and I waited in line totally worth it I got 2 bacon and cheese things 4 chocolate croissants and 3 chocolate chip rolls. I thought we would have them for breakfast for the next few days. Morocco was next but of course poncho up again quick look then off to Japan DD loves Japan I told here about the store and she was off running right past Japan lol she thought it was China. We lost her in the store for a while. Then the skies opened and it was cats and dogs with chickens and goats. Poncho up and off to America to see Voices of Liberty and The American Adventure. Voices of Liberty preformed in the American Hall and they were wonderful. I liked American Adventure, i thought it was moving. Italy was next the off to Germany I stopped to get some Caramel popcorn. Time for Dinner at Biergarten dinner and show was amazing but service was bad to say the least. I would still go back the food was that good. Still raining so poncho up to China and Reflections of China. I had FP for IllumiNations but we were tired. Quick look at Norway and a stop in Mexico skipped the boat ride line was very long and it was hard to move around in Mexico. So we called it a night and went back to Sports.

I’m sorry that happened at Soarin and for the lousy response. Glad you got your mojo back.

I wound up giving the FP to someone I had no use for it DD would not ride test track alone.