100% this. For MK, AK and HS I think most people are already up. For EP not so much. However, we’re booking ILLs and Genie+ LLs at the same time. In the case of HS where ROTR and SDD can literally go within the first minute you can’t do both unless you have 2 people to do it. Even then, by the time you get both of those made the times to select for MMRR are not so great.

In the case of AK, most people are doing this while in transit or standing at ticketing. Which is super frustrating if you’re also trying to wrangle kids. I’d love to see the time change to 1.5 hours or 2 hours before each individual park opens officially for Genie+. Sure, there will be some people who aren’t up yet, but not as many and it would stagger the times a bit so if you’re trying to book 1 ILLs for HS and 1 for EP you aren’t having to choose which one is the priority. The night before wouldn’t work any better because of similar issues of people in parks or already in bed for the night. Maybe even do ILLs 15 minutes before or after Genie+.

Actually it just occurred to me. Do the ILLs before park opening (for those onsite) and then let Genie+ (and offsite ILLs) start after you tap in, just like DL was and the current DAS is. I have a plan for where to start with DAS, but it changes depending on crowds upon arrival as well as current wait times. I think a lot of people would do the same with Genie+. It sure would take some of the stress away from getting into the park each day.

let Genie+ (and offsite ILLs) start after you tap in

Ah that probably would solve a lot of morning anxiety. It’s not a perfect solution, but it wouldn’t be much worse than what we’ve got.

As an offsite person last week, we had to try and get ILLs literally at rope drop as we were walking along with a moving mosh pit. I definitely had some safety concerns.
As per my prior posts, perhaps my biggest issue with the new system is how much of my vacation I had to spend on my phone for things like that and for refreshing and refreshing to hit new Genie + openings. Which is why the best tip I can give anyone is still: bring an extra battery pack/stick or your phone will not make it through the day!

No problem. We Android users are somewhat the step children when it comes to the technology updates. I know some of the touring plan programmers are Android users, so they will get to us. I think Apple just covers more people, quicker.

Interestingly, according to statcounter.com, as of October 2021 Android usage worldwide was at 71% of the mobile phone market (iOS was 28%), but in the US iOS usage is at 58% and Android 42%.

The gap is significant worldwide, but much smaller domestically.

…and the US gap is small enough that Android should NOT be treated as the step children of mobile technology.

With the closed loophole, the new rule for booking your next LL is: You can book a new LL after 2 hours, or after using your last booked LL. 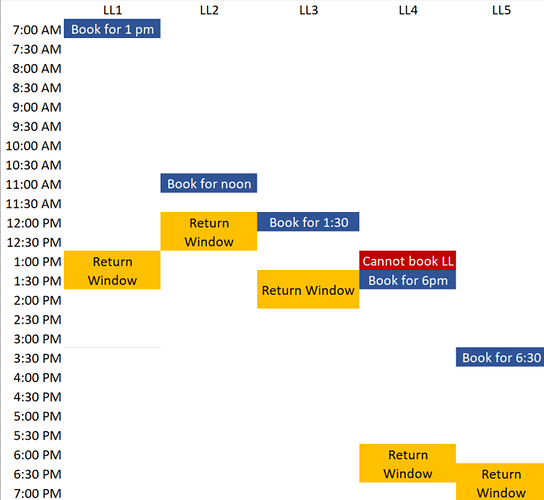 Thanks! I will update the lead post with the new rules.

The graphics are so helpful! Thanks!!

Steve, you are so awesome!

I like loopholes when I and not everyone knows them. But, two hours after your last booked makes sense.

@SteveBloom , you booked a 3pm at noon. In that example you should have been able to book another at 2 based on that action? I know your 1st booking would not allow it, but the noon one would?

Thank you for expressing this. I was at WDW last week and I feel exactly the same way as you did. I did my homework, planning, and research with the help of TP and this great community. I did my best to use strategy and Genie+. I’m looking back on our week feeling like it was a wonderful trip but also very frustrating. Of course, crowd levels were high (this was expected) and the MDE app crashed a lot, which didn’t help. I can’t even let myself think about the additional $ we paid for Genie + and ILLs on top of our ticket prices. Can’t even.

I believe you are correct. I’ll replace the graph. I’ll also asking our in-park staff to verify this.

I just updated the rules in the lead post. I did want to clarify one thing. Does the 2 hour rule apply after your most recent LL? Or after any LL reservation that is for greater than 2 hours in the future? So if you book another LL during the 2 hour window because you were able to use a separate LL, can you still book another LL at the 2 hour window since it is treated separately? Or is it overriden by getting a new LL reservation in the intervening period?

I also looked up the latest LL availability per Thrill Data and added this tip on the order of priority:

It is always that the last LL is actionable. If the last one is more than 2 hours the two hour rule applies. If the next one is an hour away, you can book again on scanning.

Thanks! So I think I have reflected it properly in my rules. Hopefully.

I was at WDW last week and I feel exactly the same way as you did. I did my homework, planning, and research with the help of TP and this great community. I did my best to use strategy and Genie+. I’m looking back on our week feeling like it was a wonderful trip but also very frustrating. Of course, crowd levels were high (this was expected) and the MDE app crashed a lot, which didn’t help. I can’t even let myself think about the additional $ we paid for Genie + and ILLs on top of our ticket prices. Can’t even.

I appreciate this feedback too - I am going in to Christmas week really trying to lower my own expectations and to be ready to enjoy myself by planning time in the parks as bundled experiences:

But as I plan the other parts of my trip, I see a lot of time with my face in my phone, hitting the drops just right, and how easy it is to just buy the ILL. My desire to make things effortless and awesome for my family continues to override saving the money. I really can’t look at how few rides each G+ is going to get me as I set my expectations on slow paced days. Maybe I should just let that go and at least applaud myself for getting 16% off on all of it from discount gift cards? I am going at Christmas after all…

This has changed since Disney fixed the Loophole, and why people were reporting they could not “stacking” LL reservations.

This is super helpful - thanks! Our family is going to MK early January and my kids like all the rides there, they aren’t picky. We are staying onsite. If I’m reading this correctly, let’s say we book a Dumbo LL for 9:30. If I tap-in at 9:30, I could then book another LL for whatever is available (say Barnstormer since it’s right next door and that should hopefully have availability). Then as soon as I tap-in at Barnstormer, I can book another? Or do I have to keep waiting 2 hours?

Yes, in your example your next action is based on the last LL booked. In a way it has simplified the system? You don’t have to worry about booking anything in the same time frame, you just have to know your current booking window?