My DH proposed this trip to WDW and I got sucked into the planning pretty quickly. This will be my first trip to WDW, my DSS16 first trip to any Disney park, and my DH’s second trip. The last time he went was circa 1985 for 3 days. I’ve been to DL 3 times – the last time 1993 for grad night (go Panthers!), but never WDW!

*Why would you go on Columbus Day Week?

We decided on a week long trip because we don’t think we will be back for a long time and we wanted to be able to see things in a more relaxed way. I get really sick in the heat, so I nixed the summer months. We wanted to take DSS16 out of school for a Sept. trip, but after some consultation with the school website and a phone call to the school, I quickly realized that is not really allowed in our area. They take their attendance very seriously here! Soooo, after consulting the crowd calendar, we decided to go during DSS’s fall break: October 6 – 14. Already starting off less than ideal, right? The crowd calender! The free dining! It’s still a trip to Disney and we plan to enjoy it! The crowd calendar kept dropping too, so that’s been awesome! We’ll be staying at POP.

We’re using Magical Express. It sounds delightful to not have to worry about luggage. I realize our bags may take up to 6 hours to get to us, but we’ll be at the park, so no worries!

We booked the quick-service dining plan. Originally, I hoped the free dining plan would be offered, even though I knew the odds were against us. We didn’t get the free dining, but decided to keep the plan anyway. We like the idea of not having to worry about food cost while we’re there. We are definitely a quick service family. All 3 of us are picky eaters and I’ve been consulting the Disney Food Blog quite heavily. I love that they always show the inside of the food too – that’s super important to us picky folk who have been bamboozled by a delicious outside, only to be tricked into eating something yucky. I’m looking at you raisins and onions!

That being said, I also appreciated the quote in the Unofficial Guide that said something like “Being at Epcot without a dinner reservation is like being at Prom without a date.” Well, I never went to Prom, but I get the gist. We have exactly ONE full service dining reservation - at Via Napoli. We love pizza. It’s on our 4th day of an 8 day trip, so I expect it to be a welcome change of pace.

I was so excited during the early stages of the planning process about rope drop – I’m an early bird. Getting extra rides in sounded great! I was ready. I mean, my family was just going to love this plan. We were going to get everything done early, and go on so many rides…and…and…then, I remembered. I’m the only early riser in the family. I get up by 7 every day, DH can easily sleep until 10. DSS got up at 2 p.m. once this summer. So, what to do? I consulted DH and we agreed that we could reasonably expect to get to the park by 10 a.m. So, I planned around that and if we get there early – bonus!

We prefer to travel with the idea that we’ll be at that destination again someday. It stresses us out when we think “This is our only time here! We have to do everything!” At this moment, I don’t think we’ll back to DisneyWorld for several years. We will definitely want to see Galaxies Edge, but there are many other places we want to see also! (I’m looking at you next, London and Wales!)

DH and I find that we enjoy traveling more when we just accept the mess ups and detours as part of the journey. When we got married nearly 3 years ago – we forgot the wedding dress on the way to the airport. The bag with the dress, suit, veil, shoes? We left it. It was in a “safe place”. Hey, it’s hard to remember things when you have to leave for the airport at 4 a.m.! We turned around, changed our flight, and got it, but we were laughing about it after about ten minutes. I mean, what kind of idiots LEAVE THE DRESS? Laughing and enjoying the mistakes is critical for us. Life is too short to take ourselves too seriously. We sometimes have to remind ourselves, but rarely. I hope we can keep that spirit this trip, and I think we will.

We set our touring plan for a 10 a.m. arrival, very relaxed walking speed, and for a minimum of walking. I really appreciated reading everyone’s tips on that – I found that very helpful! We don’t plan to take an afternoon break since we don’t have young ones and we’ll be starting later. It also really helped to look at a map and move stuff around. Sometimes, the window I used for lunch or dinner was shifting our times a lot. A couple times I swapped my lunch and dinner options and that helped a lot too.

DH and I both get motion sickness, so we’re mentally prepared to sit some rides out if needed, but hoping not to! I’m packing some Dramimine and got some anti-sickness patches from the doc! The hubby also has degenerative disc disease, so we’ll evaluate rides as we get there for that. He will probably sit out RNRC, for example. I got lots of advice on the rides and if you look at our plans, you may see a note that says “Red for Keith” or “Yellow for Keith”. Red means he REALLY shouldn’t ride that ride. Yellow means he needs to evaluate and use caution. Some of the rides we were warned against really surprised me!

I also left notes about particular foods we might want to try as the first step on our plans. I just wanted it to be easier for me to remember. I was super lucky to get all our FPP except for SDD. All except DHS were originally for the times I wanted or very close.

Speaking of the FPP booking, I found so many tips from many of you helpful. Most specifically:

When we first booked this trip, I didn’t think we’d book ANY extras. Well, we ended up with a Via Napoli Dinner, MNSSHP, the Void at DS, a Caring for Giants tour and a BOG lunch! Lol. I hadn’t really thought of BOG because we aren’t really interested in character meets, but then I thought it would just be a cool place to lunch. I didn’t even TRY to add it until 27 days out. Booked it, for 1:55 on 10/8, changed my BTMR FPP, set up a reservation finder for 10/9 when I really wanted it and it worked like a charm. We got a 11:25 am. 26 days out. Then, I worked to modify my BTMR again. Lol.

The planned days are:

So, that’s the plan going in. We’ll see how it compares to the actuality. I wouldn’t be surprised if everyone got up earlier than expected….or, later than expected. I also wouldn’t be surprised if we need more rest than we’ve got planned. We’re shooting for an attitude of planned out, but flexible. If we have something planned but aren’t feeling it, we’ll skip it. I really tried to build a lot of flexibility in. We’re hoping to have time to do what we want, and also stop and take in the wonder.

I’m looking forward to seeing DSS16’s face light up- that can be rare for a teen and I think he has NO idea what he’s in for! While my family wasn’t interested in the planning, they both gave me great answers when I asked them for input. I’ll try to post our plans at the beginning of each day and photos while we’re there! 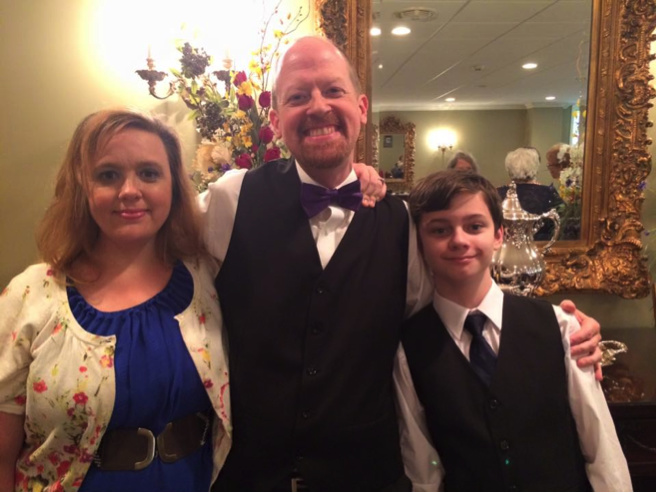 Feel free to say hi if you see us in the parks! (My DSS is as tall as his dad now – he’s growing like a weed!)

Can’t wait to read more! I love reading trip reports in general, and I like your writing style!

I’m excited to read about your trip! My DS16 and I are going very soon, his first trip to WDW, my first return in 18 years. I need all the teen advice I can get!

I thoroughly enjoyed reading this !!!

You guys will have an awesome trip, can’t wait to hear from you when you get back !!!

Beatiful family by the way.

Thanks! We’re so lucky. He’s the easiest kid. My brother was a terror, but he’s awesome. We have some ADHD to manage and he likes to wear costumes constantly, but everything is easy with him.

Hope you have a great trip!

We are headed there next week! I am hoping for a great week! Sounds like your plans are great and your attitude is even greater!

Sounds like you have a great attitude! Can’t wait to read all about your trip. I just know it’s going to be wonderful!

I’m looking forward to your trip report ! Enjoy every second

I hope you guys have fun! You have the right attitude for sure. Plan, but be flexible and just go with the flow. Your dress story cracked me up

I still can’t believe we did that. It was like a scene from a movie, we had to run through the airport with the garment bag. I definitely picked the right guy though - we have similar temperaments. Lol

We have some ADHD issues too. Do you know about the DAS pass? It can be helpful if you have trouble staying in a long line.

Yes, but thanks for checking. My DSS manages pretty well, but we’ll keep that in mind if we need to. It’s always good to have a reminder.

Thanks so much for sharing. I loved reading all your “footnotes” to get ideas. I happened to notice you wrote bring pins to share with Jawas. I feel like I read somewhere they no longer trade. Maybe others can comment. Just wanted to give you a heads up in case, so your not disappointed if indeed they no longer trade. Enjoy your trip. Looking forward to hear how the execution of the plan goes.

Ah, I hadn’t heard that, but I appreciate the heads up. We’ll find out by Sunday though. Lol

Yep, the Jawas have left Hollywood Studios. We didn’t get to see them last month. Hopefully they will be back when Galaxy’s Edge opens!

Thanks for the heads up. I’ll prepare the troops today.

Thanks for sharing and have a great trip! I’m also happy to hear about any tips for teen boy. We are going with our crew soon, oldest is DS13. Would love to see lots of smiles on his face if we can make it happen!