That was fast - Bye Kite Tails!

Did we see an announcement about this?

Scott Gustin on Twitter shared the attraction page on the WDW website and it says it is closing September 30th.

Ok what did you Brits all say to someone listening!

I didn’t really think that TP updated the attractions that real-time!! 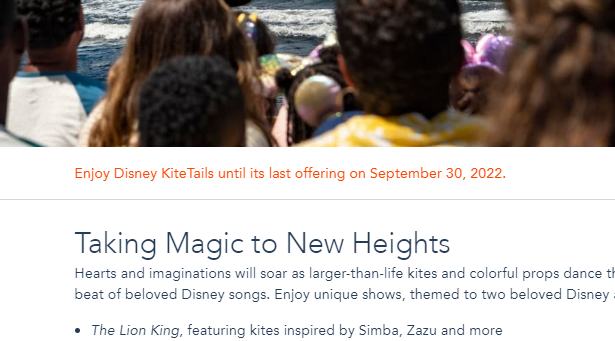 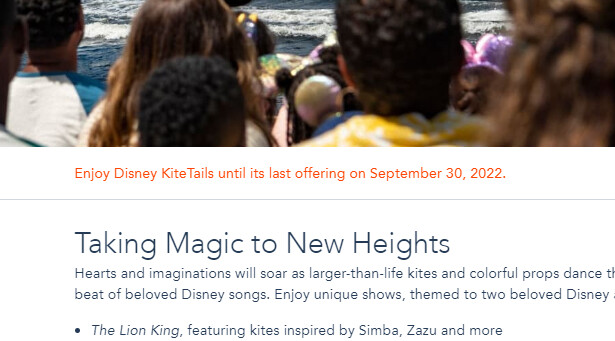 Oh, good. Now I don’t have to feel guilty for skipping this show.

I mean the best part was the BOINK sound effect when they crashed head first into the stands.

I’m wondering if they were just doing the shortened version until all the kites were beyond repair?

It had potential, we actually enjoyed the first version. It wasn’t a big spectacle of a show but it was nice entertainment while you sat with a beverage and ice cream for a break. (As long as you found shade)

Maybe they should move Harmonious to here since there is seating laid out for a single sight line?

They cant launch fireworks in AK, but they could still shoot sparks out of those barges…

Maybe they should move Harmonious to here since there is seating laid out for a single sight line?

Seems like they could use the barges…maybe just two tacos and the Stargate…to do a projection show with water effects, sans the fireworks.

Right but not really needed.

maybe just two tacos and the Stargate…to do a projection show with water effects, sans the fireworks

Like a World of Color show on steroids. It doesn’t have fireworks and it’s awesome!!

“As you know, Disney KiteTails debuted at Disney’s Animal Kingdom Theme Park for the launch of the 50th Anniversary celebration of Walt Disney World Resort. After this first year, we will transition the entertainment on Discovery River Lagoon to the Flotillas. The last flight for Disney KiteTails will be September 30, 2022. We look forward to seeing our guests continue waving to their Disney Friends cruising by on Flotillas, embracing Disney pals with up-close encounters, and more to come as we introduce our Festive holiday season offerings in the months ahead.”

And nothing of value was lost….

Now… let’s get a REAL night time show into AK, [you giant waste of space] D’amaro.

Bummed. Never got a chance too see it except in videos. I know probably not a big loss but it looked like something we would enjoy.

It’s on the level of a short castle show(like in the before times where the castle would do an animation to celebrate a time of night).

great for a quick stop and view but nothing to plan around.

I know. But I like kites, so was looking forward to it. Not a big disappointment but still bummed. I’m glad they are keeping the flotillas.

I’m glad my daughter and I caught most of it while we waited for the rest of the family to ride EE. It was cute.

) of the show this week. I thought it was cute, and my niece wants to try flying a lot from jetskis now.

It’s funny that they’re acting like having characters on pontoo… ahem, flotillas came after, as a new thing to replace it when that has been a thing since they reopened in 2020.

It’s funny that they’re acting like having characters on pontoo… ahem, flotillas came after, as a new thing to replace it when that has been a thing since they reopened in 2020

This is what I was thinking. So unless they start doing something new and spectacular on those flotillas, this amounts to them taking away something without indication of any REAL replacement. But…I suspect we will hear more eventually. After all, they need those jetskis back at Epcot for Epcot Forever.

I really enjoyed watching as we ate our lunch at flame tree. I don’t think I would have sat waiting in the sun.

The puppets they had for the crowd (before the shortened version) were cute, I wish those would still appear in the park. The kites themselves were really cool. Sazou was the only one that was a kite all by himself. The others were windsocks with kites on top that enabled them to fly - all cool to see.