Tell me what you think

I’ve seen and heard people talking about portable misting fans. I’ve seen them in Walmart for around $10 I would need to get 2 or 3 so $30 seems a bit much. Yesterday I was on my way to check out at Walmart and I saw these with no price, and after 5 minutes of thinking and looking for a price I figured I’d bring them to the register and ask how much. 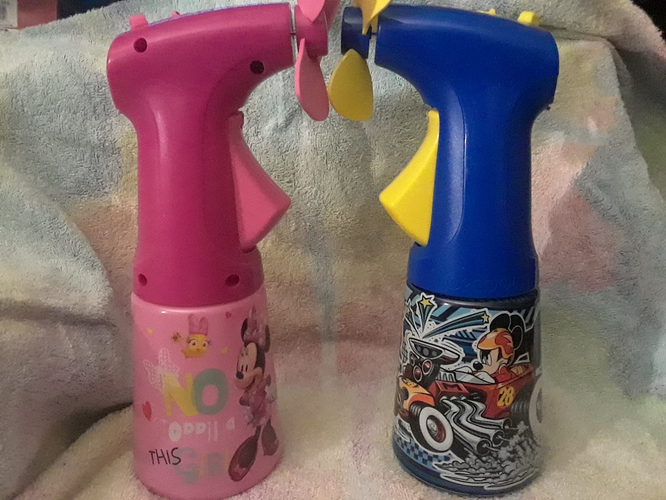 I don’t have little kids but at $3 how could I pass them up? And when it comes to Disney we are all kids at heart (or at least I am). They had 2 other ones Toy Story and Disney Princesses and DD HATES FROZEN (I know blasphemy) so she is SOL.

Hey, that’s a great price. I’ve been known to put ice and water in those things…

And my DD hates Frozen, too.

Are they battery powered? From the looks of it in the image, they look hand-powered instead of battery powered, which might explain the price. Hopefully they will hold up.

We are not Wal-Mart shoppers (actually, we sort of have a personal boycott against them due to so many horrible experiences with them) so I don’t know about the quality of such stuff, but Target has a bargain section in the front with $1/$3/$5 items often. Some of those items are cheap…because they only last a very short time. I’d be afraid that these might fall into that category (as in, they might not last the trip).

IF they do, it is truly a bargain!

(actually, we sort of have a personal boycott against them due to so many horrible experiences with them)

So do we for the same reason.

They are battery operated and they work fine I tested them when I got home. But only time will tell how they hold up. I boycotted them for several years and the one in the next town we won’t go to.