Talk to me about my pre-park opening dining choices, good idea or bad idea?

I have a pre-park opening dining reservation all 3 mornings of my WDW trip. Monday morning 8:05am reservation at Crystal Palace. Tuesday, 8:05am reservation at Hollywood and Vine. Wednesday 8:35am reservation Tusker House. I am doing these mainly to not have to deal with lots of crowds upon park entry and to get a bit of time in the park empty(ish) for photos. I am not hugely concerned about rides like 7DMNT, SDD, and FOP as I am planning on FP+ for those. Are these pre-park breakfasts a good idea? I couldn’t get an earlier one for Tusker, can I still show up at like 8am and hope I can get in early?

I think they are a good idea based on your outlined goals and if you want the food.

I think they allow anyone with a PPO breakfast into the park early (but you may not be seated until your ADR time) so you should still get in to AK early.

For what you’re trying to accomplish I think they’re fine for the most part.

Do know that for MK they allow all guests through taps beginning at 0800 for an 0900 opening. You might not get those empty Main Street photos you’re thinking about, but should have lower crowds if you arrive early enough. I believe they start letting reservation folks through at 0745? So you should still have something of a jump on the rest - they will just catch up quickly. Also, MK is the park I most frequently see opening hours change to earlier, so that 0805 could turn out to be with a bit of a crowdll additionally you could end up further “behind the pack” than you’re anticipating. Doesn’t sound like too much of an issue for your plans but something to be aware of. Finally, I have found CP to be the character meal that takes the very longest. 90+ minutes is not unreasonable to plan for even for breakfast.

I think I’ve heard that some or all of the other PPO breakfasts operate the same way, but maybe someone else can tell us definitely re that.

Tuskar House has my favorite PPO breakfast. Love the options at the buffet. You will get in well ahead of the masses to get great picture of the TOL. Only problem I have is you are hoping to get a head start on RD for FOP you wont. You will be let in before 8am for your ADR but everyone else will be let in not long after. This means the wait before the bridge to Pandora starts to build fast. By the time you are done with your meal you will be far back in the pack. This is not bad, you just don’t get any advantage. 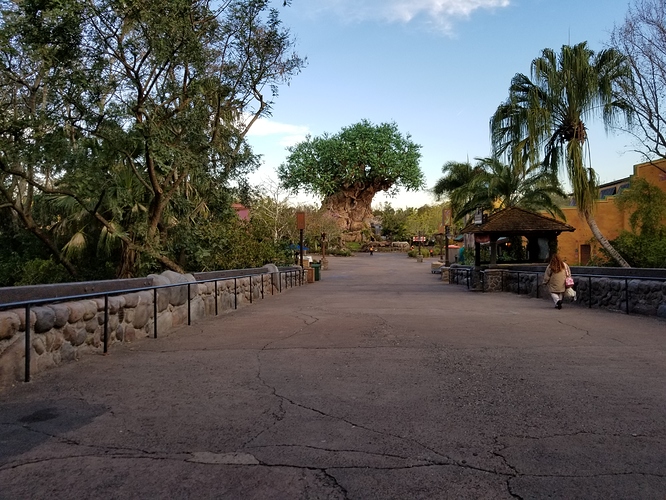 I would personally do BOG for your MK pre-RD ADR. You will then be right next to 7Dwarfs. Also, Garden Grill at Epcot gives a huge advantage for Soarin. Not sure if you are planning on going to Epcot.

Thanks, I’m not really doing prepark opening breakfast for the rides, as I mentioned. More just for the emptiness of the parks for pictures with my family.

We arrived at AK around 8:15, right after they let the crowd in, so the huge mass of people had already gone to the Pandora bridge and the entry to AK with the tree of life was pretty open. We had plenty of opportunity for photos. Not an empty bridge like @galuchies posted above, but certainly an empty tree. And we were the first photos when photo pass arrived shortly after that.
Just thought I’d mention in case you wanted to do one less PPO. I’ve heard amazing things about Tusker House though.