Stare into my crystal ball

So, this thread is a tricky one. Because you know, nobody ever expresses anything but facts on these forums, and we all stay on topic. Ahem. Right. Carrying on.

Anyhow, I thought it might be fun and interesting, however, to have a crystal ball thread. But let me be clear. This isn’t about stating what you HOPE or WISH would happen, nor is it about making wild, crazy guesses. However, it also isn’t about just stating what is known. So, not so much rumor as it is conjecture based on what we we are seeing and knowing now.

So, this thread is about expressing your personal thoughts on what the future of WDW holds, for good or for bad.

And I’ll start with something that’s been on the back of my mind lately. Given the recent changes/announcements that seem to be making on-site stays less desireable, and considering what resorts have been open and are scheduled to be open, it has got me wondering if Disney actually intends NOT to open back up some of the resorts that were shut down for the pandemic…at least for the foreseeable future. In particular, I’m thinking about Port Orleans.

If Disney is making changes that would invariably make staying on-property less attractive, maybe they are also planning on some corresponding cost-saving measures. DVC resorts aren’t an issue. They are DVC. And I think in order to attract a lot of people who are flying in, the values need to be open (Pop, for example). But the moderates? Does it make sense to tie up resources into re-opening Port Orleans? Even as crowds return, they weren’t filling up the rooms on Disney property. Moderates cut into people staying at the more expensive places. With Port Orleans being off the beaten path, it kind of makes sense to just leave this resort shuttered indefinitely and only consider re-opening it if/when Disney is back to filling up most of their existing operating resorts.

I have other thoughts, but I’ll leave it to that one for now.

Interesting… much has changed over the decades. I stayed in a Disney 2 bedroom condo once, part of the art institute. Those are now offices. Ok not following your rules, they’re too hard

but along the same lines… didn’t the Tree houses used to be dorms for foreign CMs? I got nuthin’

They can’t do anything with the DVC properties, as you said, and with the recent opening of the newest resort, it would lead one to believe that there is still money in vacation club rentals. But would they leave it shuttered with the rush they must be anticipating once Covid is over? I would think they would demolish it and use the space for other guest related activities/needs, whatever those might be.

The allure of the moderates, to me, was the affordability of having a big family be able to stay and still have it feel like a resort instead of a Disnney-fied motel. I hope they don’t take them out.

I’m taking a flyer and guessing they tear it down and use the space to build a “live in” Avenger’s Campus. There. I said it.

I hope they don’t take them out.

Currently, the other two moderates are open: CBR and CSR. So moderates are available. CBR needs to be open due to the Skyliner. CSR needs to be due to being DVC. But what is keeping POR/PFQ from staying closed? I mean, it is two resorts requiring large staffing, additional buses, plus boats to/from DS. And while it is a pretty location, I think Disney would rather people book elsewhere.

I think all of the perks for on-site will be restored albeit in a new form.
The pandemic has altered & belayed the roll-out of any new perks and given us a skewed perspective of what’s in store.

CSR Coronado is not a dvc. It’s a convention center that’s not conventioning

But what is keeping POR/PFQ from staying closed?

Really? They list it as bookable via DVC points.

Hmmmm all dvc points can be converted. CSR is not in the dvc inventory book. Unless I totally missed it? Or the new tower has dvc rooms but then I would be seeing it to book with dvc pts

I was just basing it off this:

But maybe they are only listing it because DVC members can book it, not because there are technically DVC rooms there???

But if that’s the case, if CSR wasn’t already open, I might think it would not open as well!

Well it wasn’t open. It was being used for the basketball ppl.

My guess would be the demand for moderate resorts is not there yet (I don’t think there is a super high demand for any of the resorts at this point due to the pandemic). CBR just had major resort renovations and the skyliner was added. Makes sense why that is open. I’m not as familiar with CSR, but didn’t that just have a major addition as well?

I would book POR before CBR and CSR. I know there are people that prefer POFQ because of the small size of the resort. I’m not really into the sky liner idea and I don’t prefer to stay at a resort that tends to cater to conferences.

Didn’t they just do some room renovations at POR?

But if conventions come back, CSR is an important piece of the puzzle. My friend books travel for her organization and has booked lots of people into Disney resorts, but mostly CSR.

I was just basing it off this:

Go here and you’ll see that every WDW resort is listed. That doesn’t mean they’re DVC in any way. DVC owners can use points to reserve non-DVC resort rooms when there’s availability. Most don’t, as the rooms are expensive points-wise and there’s a $95 reservation fee. 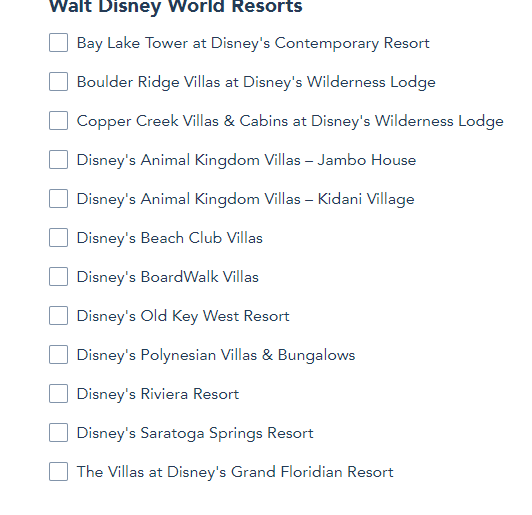 That doesn’t mean they’re DVC in any way.

Ah. Okay. That wasn’t clear to me. I thought if they listed a point value, it meant it was DVC. Got it.