Stacking at HS for 2:00 arrival

We are going to start at Epcot using a mix of rope dropping, pre-selected DAS, same day DAS, and purchased Guardians. We will hop to HS for the rest of the day and arrive/scan in as soon as they will let us (what is that time - 2:00 on the dot?)

We will purchase Rise and will have Genie+ so I want to come up with an order of which rides to select for LL and when I should be doing this. Our wish list rides (understanding we can’t do them all) are: Slinky, TSMM, Tower, and Mickey and Minnie’s. We will have DAS as well.

From what I have gathered, at 7:00 am, I will plan to purchase Rise (hopefully a 2:00 - 3:00), book Slinky, and purchase Guardians (for 10:00ish). Should this be my order of attack? I might ask a friend to book something for me simultaneously by using my app as well. Oh - and we have to be back at Epcot around 6!

I’m just very confused about stacking and when I can grab the next one.

If you book a LL for SDD at 7:00am using G+ then your next LL can be booked 2 hours after HS opens that day.

When you say you want a friend to book simultaneously, what do you mean?

Also, I personally would book the SDD first if it’s a high CL day. Those generally go faster than ILL. You’ll also want to work your free VQ for Guardians in there somewhere, unless you’re going in the later spring when Tron may be open.

Here is the latest data from TP. It displays the order of priority from top to bottom with the return times displayed in color. 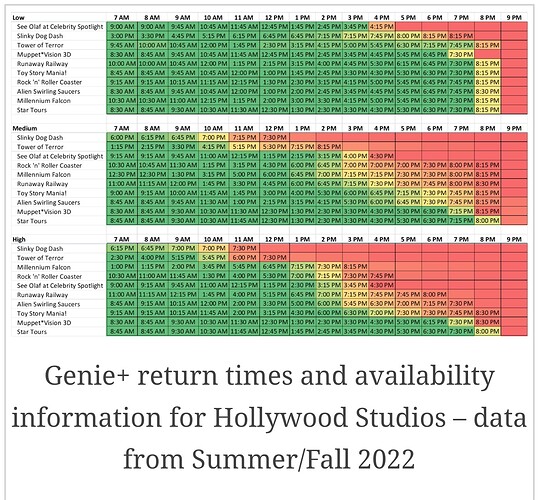 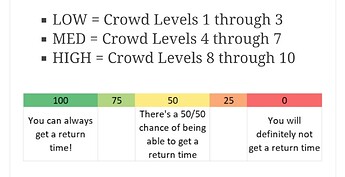 Officially, it’s 2:00, but in reality, the tapstiles automatically turn the right color and let you in at 1:47. Don’t ask a CM, just walk up and tap in like you know what you’re doing.

We went into at Epcot at 1:45 pm on multiple days a couple weeks ago.(we popped in just to get VQ and left)

Thanks! So because I want to buy an ILL for Guardians for a very specific time, I might have someone else book that for me at 7 am while I’m grabbing a LL for Slinky at 7 am.

Does this chart mean:

Yes that’s what it means. But I see it as a worst case scenario because it could be an average between 7:00 and some time after. Example:

This is on a CL8 day. It shows actual return times in 5 minute increments: 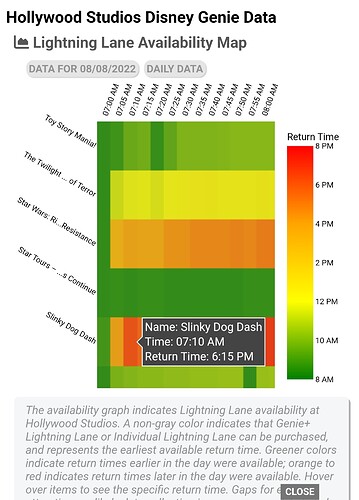 In this example, you would need to wait around 10 minutes to get that evening time.

It’s really luck of the draw right at 7:00, though, and it also kinda depends on the accuracy of the predictions.

Can someone please confirm that I have my timing down right? HS opens at 8:30 am on the day we go.

Is this even possible? Or will Genie+ be a waste of money?

You may not be able to get so precise on the times. So, the SDD one you can probably manage to get in the late afternoon/evening…but it might be tricky to pinpoint exactly between 2 and 5.

Now, if at 10:30, TSMM is not yet in the time window you want, you will need to wait until it is. That is, you might not be able to book at 10:30 exactly. You can either wait, or instead book something right away in the park you are starting in to use G+, and then when you tap into whatever that ride is, try again for TSMM. It just depends on how quickly TSMM moved into the window you want.

If you can be more flexible with the timing of when the LL is available (after 2:00) it might be a little easier.

Ryan’s response is sound. Another way to tackle this is with the drop times, based on when you want to ride SDD. I don’t know if I’m supposed to mention the exact times here, but they’re in the first post of the drop times thread in La Cava. In that method, you would have until 11:xx to book TSM, lining it up with a ~2pm return, which should be doable most days. Then, as long as it’s been at least 2 hrs since you booked TSM, the drop at 1:xx can give you a couple of seconds to grab SDD with a return window that overlaps you entering the park and your TSM time. Something else could be booked at this time if wanted and still allow you to book ToT at the next drop 2+ hrs later for near immediate use. Not to mention if you’re at another park before this, your 7am is freed up for a headliner there. But not sure how much DAS will be used.

Sometimes the drops, if you’re pretty quick, give you more certainty in return times than how fast and sporadically SDD advances at 7am, or how far ahead the return times will be running in general on a given day. Try some test runs on several days at the critical time points, prior to the real day and confirm what does/should work, along with checking Thrill Data. I’ve been studying HS in depth lately to nail down a strategy too.

Thanks so much. I like to “practice” so this gives me something to keep an eye on for the next couple of weeks!