On our final day at UOR and the final day of our WDW/UOR visit, we headed back for early admission at USF, to cover one ride we had not yet done (F&F…it was good, enjoyed the live preshow very much, but ride was short compared to all of the preshow stuff), to spend a little more time in Potterworld, and to hit each person’s two favorite attractions. Mine were Jimmy Fallon and Forbidden Journey. Son’s was Men in Black and Flight of Hippogriff. Daughter’s was Jurassic Park River Adventure and Gringotts. DH goes with the flow.

We also had lunch at Three Broomsticks, which was great. We were done with all of those things (including taking Hogwarts Express to IOA) by 1. I rode Hulk on the way out while DH took the kids back to the hotel to pack up our bags. Hulk was head-rattling! But fun. Love super-fast start to the ride.

We let the kids get in one more swim at HRH and had paid for a late check out (2 pm). Our car picked us up exactly at 3 to head back to MCO. Before the car came, son started crying that he didn’t want to leave. DH looked at me and smiled and said, “After all your planning, isn’t that exactly what you wanted?” I smiled and agreed and kissed away my son’s tears and told him I didn’t want to go home either.

It was an amazing 8 days, and I loved every minute of planning,and every minute of being there, whether we followed the plan or not. (Upon arriving home, DH and kids bought me a beautiful necklace from the Disney Parks store as a thank you for planning our trip).

My take-aways from UOR:
-Express Pass is awesome. No need for a Touring Plan
-Even w/o a TP, UOR lines are so much shorter than WDW
-QS food at UOR is not so great
-USF/IOA can be done in less than 2 days (saving Volcano Bay for another time)
-Staying at HRH, for a 5-min walk to parks, and early entry, was so convenient
-As Jeremy on Backside of Magic podcast mentioned recently, it IS weird that the UOR team members clap when you return from a ride…as if it was some kind of personal accomplishment. DD7 and I found it weird. DS5 got into the habit of clapping along with them.
-UOR doesn’t “flow” as easily as Disney…no magic band, and my room key never worked when I tried to charge things to it. When we went to play one of the carny games, the guy had to set up and didn’t quite know what he was doing. When a photographer took our picture inside the front gate, it never uploaded to the QR code card he gave me (and it took him 2 min to figure out how to focus his camera). But, you pay less for UOR than WDW so I guess that is reflected in some of the “quality.”
-The attractions at UOR were great…but maybe a little too focused on the simulator stuff. DD7, on her fifth ride: “We have to wear those glasses AGAIN?”

Since we have an annual pass for UOR (as it cost the same as a 4-day pass), I suppose I have an excuse to plan another trip before the year is up. DD7 wants to go back to Hollywood Studios, and DS5 Epcot. So, maybe another short trip will be in the works for the summertime…

Thanks to all who read and commented on my trip report!!! 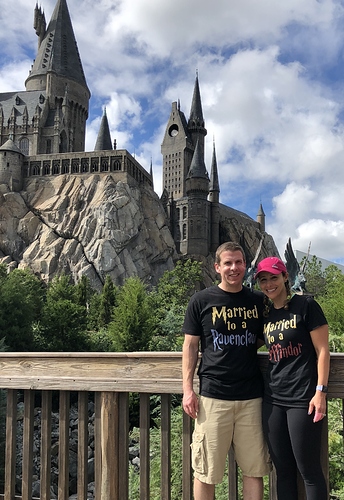 Thanks for sharing, I’ve enjoyed reading about your trip

Thanks for the kind words! I’m glad.