Stacey’s Family Trip Day 3, or “Sure Let’s Cancel Ohana even though I’ve Been Waiting 2 Years for that Bread Pudding”

Day 3 dawned as another sunny and humidity-free morning, with DD7 wanting to RD Space Mtn again, and DS5 wanting to ride 7DMT. We had FPP for BTMRR, Splash, and Meeting Ariel. It was a predicted CL1 Day (and ultimately pretty much felt that way) , so DS5 and I were at the hub spoke rope at 8:30 and were very close to the front. We sat to save our feet already tired from days of walking (9 miles for me the day before over EP, the pool, AK and MK in 13 hours); folks around us stood and hopefully were not too annoyed by us. As we were sitting there my son mused whether I would find another jewel for him as I had two days before. It was then that I realized my husband had the backpack with the acrylic jewels in them. Oof.

We could see pieces of the welcome show; DS5 did not seem to care that we did not have a great view of it (it is very short). Basically walked on to 7DMT; asked to sit in the front row; were off by 9:10. It was the first time I’d done the standby line and it was neat seeing the jewels. Son was a little disappointed that I didn’t “find” a jewel again, so when we met up with DH and DD7 at HM, I got the backpack and surreptitiously “found” a jewel that “must have fallen right into my shoe during the ride!” DS5 was delighted. We rode HM; kids loved the hitchhiking ghosts at the end.

Walked to BTMRR for our 9 am FPP, for our first ride on the coaster since we missed our FPP on Day 1, and it was under refurbishment when we were there in 2016. Went to Splash, enjoyed that. Then it was time for the kids’ Pirates League appointment. Son picked, of course, the pirate that requires the most make-up (the skeleton one), and daughter did the mermaid package. This was a first (we usually do BBB for her) and they LOVED it. Seemed to go faster than BBB, kids loved the Pirate set and the CM’s. It was busy b/c it was a MNSSHP day but we were taken on time (10:50; we arrived exactly at that time, not earlier). DD7 had told me she would love it if we could be matching mermaids. (They do adults there, unlike BBB). They did my make-up for free! (I did not need the hair or merchandise). Super sweet of them and I tipped them afterwards. The best part was when one of the pirates took my kids into the secret pirate room, had them take an oath and find the treasure. Great Kodak moments.

After that, we went straight to meet Ariel (as was planned to do right after my daughter had her mermaid makeup applied). Ariel loved DD7’s mermaid look, of course. I then grabbed a FPP for Barnstormer while we walked on to Under the Sea, and then after Barnstormer we headed to our CRT lunch. On the way, I picked up a FPP for Meeting Rapunzel and Tiana after lunch. (Didn’t see any other good same day FPP’s, despite being a CL1. Saw only IASW, Teacups, Barnstormer. But, I also didn’t spend too much time refreshing) CRT was nice (we had done it 2 years ago), food was good, but I thought the character interactions were super short and perfunctory, and unless your kiddo is a princess lover, not worth it. DD7 loved it, but for the price, that was our last one! After that, we met Tiana/Rapunzel and hopped on the ferry back to the GF. I was EXHAUSTED. And full. So full that DH and I decided we would not get our money’s worth at Ohana that night, so I called and they let me cancel. Funny, as much as I was looking forward to it in planning, cancelling it that day was just not a big deal. We enjoyed the pool (the one with the slide, of course) and had a light dinner at the club lounge. We had a lot of packing to do as we were checking out the next morning and spending the day at AK before transferring to Universal, so we had to be mostly packed but also have stuff out for the morning. We watched TV and packed, gave the kids a bath, and went to sleep on our last night on Disney property! 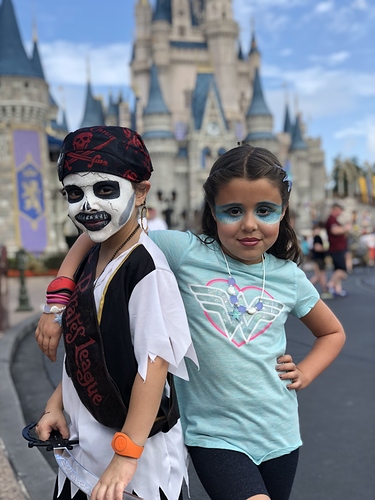 What an awesome picture!!

Oh thank you! I do a little photography as a side-hobby. (Attorney by trade).

It’s a very good pic - your daughter really carries it with “her attitude” IMO. Seemingly catches her personality well…

That is such a great picture!