Our day started with a limo ride from our house to Chicago - O’hare airport. The kids had a blast and the big kids enjoyed the mimosas and beverages in the limo. It was super convenient and hassle - free, we were dropped off at the terminal. Check in at United was easy using the kiosks. We were flying first class so we used the premier security line and we were through in about 15 minutes or so. 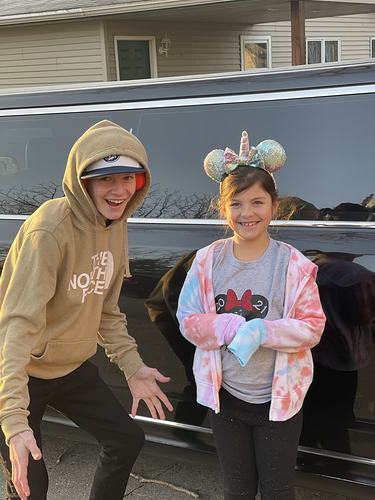 The flight was uneventful and we landed at MCO about 3pm local time. We landed in Terminal B so we got our luggage and then back tracked to Terminal A to pick up our rental car. We used DOLLAR (owned by Hertz) and the line was sooooo looooong. Once we were checked in we went across the street to pick up our car. We thought a 7 passenger SUV would be enough for the 6 of us and our luggage. We were wrong. We crammed everyone and everything in and headed towards our AirBnb property.

We booked a house through Airbnb in Davenport. The house had 4 bedrooms, 3 bathrooms, and a private pool / hot tub. We were about 30 minutes from MK, HS, AK, Sea World, IOA, and Disney Springs. It was 100% worth it and we’d book a house again in a heartbeat. We may look at someplace closer through AirBnb but the staying off property wasn’t as bad as I thought it would be. It was nice to not wear a mask on the drive to and from the parks and it was nice to have coffee by the pool in the mornings without a long trek.

We ordered groceries though Instacart from Publix. The order was delivered shortly after we arrived and after putting everything away we placed an order for dinner take out from a local restaurant. It was an early to bed night since we had an early morning. 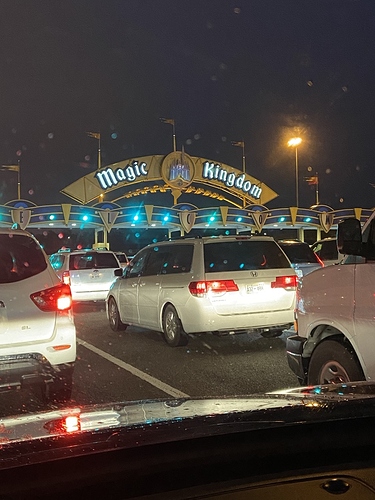 We paid for preferred parking and got front row! We went through temperature screening and choose to take the ferry. It was, in hindsight, a bad decision because it was still pretty chilly at that time and raining. 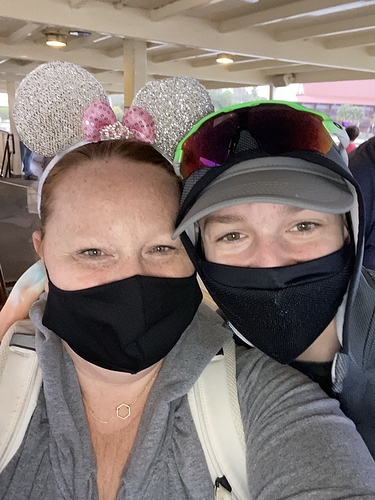 We entered MK just around 8:00 AM. (Park open hours were 8am-9pm). Here are the rides we did in the morning: 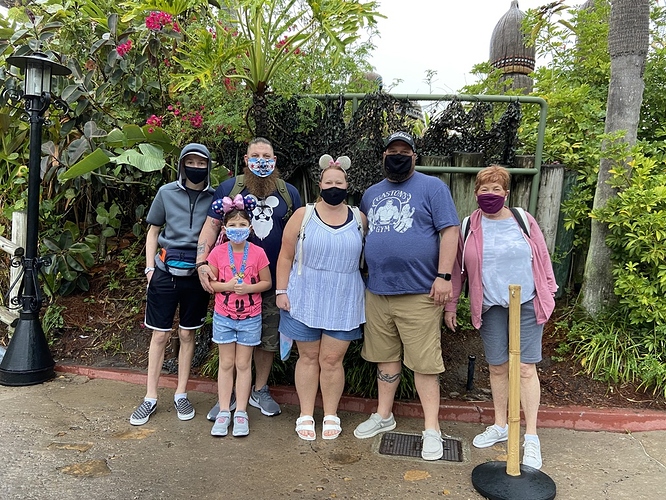 We had lunch reservations at Whispering Canyon so we left MK and took the boat over to Wilderness Lodge. A short walk from the boat dock to the lobby and we were there! We checked in and they told us they would text us when our table was ready. We relaxed in the chairs in the lobby for about 10 minutes and then we got the text. We were seated at a large round table near the windows. Our waitress was Kelly (not her real name she said) and she was AMAZING. There are still some antics at Whispering Canyon and everyone had a blast. The food was excellent and we would go again in a heartbeat. We took the boat back to MK and headed back to the rides.

We had 7pm dinner reservations at Liberty Tree Tavern. To our surprise, we were seated in the Diamond Horseshoe restaurant space. The service and food was consistent and everyone enjoyed dinner.

After dinner, we walked towards the exit and captured a great picture of the castle. 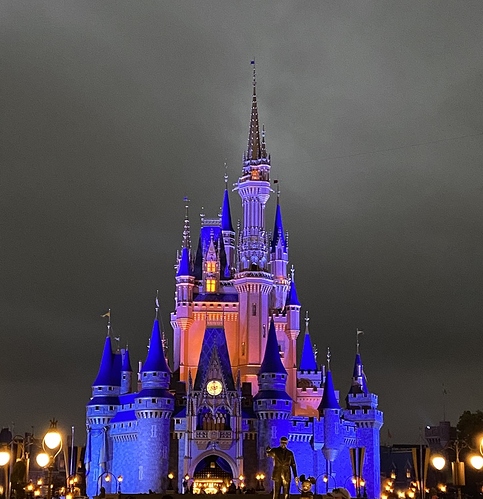 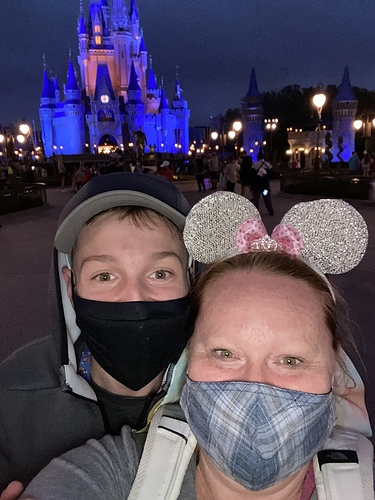 We took the monorail back to the parking lot and were happy that we were parked in the front row!

There was hardly any traffic on the way back to the Airbnb and everyone was pretty wiped after the long day.

Tuesday was Hollywood studios. We left the AIrBnb at 7:30 and were at the parking gates at 8:00 (park opened at 9). Before we left the house, I scored BG 30 for ROTR so everyone was excited.

We paid for preferred parking again and were through the temperature screening and turnstiles by 7:40ish.

Here are the morning rides: 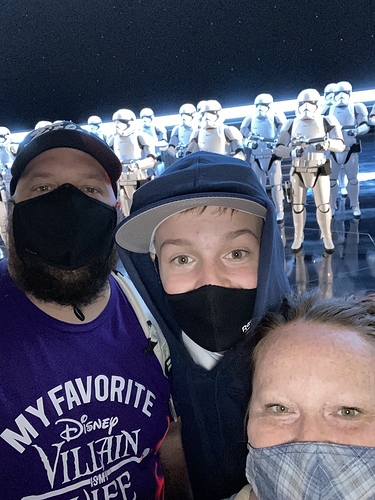 At that point we decided to leave HS and ride the skyliner to Epcot. We then took the boat back to HS. It was a nice break and a everyone enjoyed the skyliner and boat ride.

After the break, the boys went to ride Rocking Rollercoaster and the girls went shopping.

We had a 2:30 reservation at 50’s prime time diner. It was good food but the waitress was lacking a little bit in the fun factor.

After the late lunch , the kids had their droid building reservations. They had a lot of fun and really did a good job with the customization and builds. 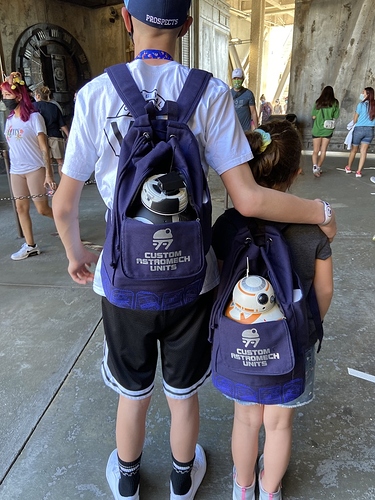 Rides in the afternoon:

Tower of Terror only had on side going all day and waits were showing in excess of 90 minutes most of the day. We were disappointed we didn’t get to ride but everyone was getting tired and so we headed back to the Airbnb.

Wednesday was Animal Kingdom. We left our hotel at 6:30 and were at the parking gates a little after 7:00 am. We again paid for preferred parking and were through the temperature screening and turnstiles by 7:30.

We immediately headed to Pandora but I did snap a quick picture of the Tree of Life while walking.

We had 11:30 reservations for Yak & Yeti. This was my favorite meal and everyone really enjoyed the food. It was nice to sit in the AC and get off our feet. The service was excellent.

We left AK around 1pm and headed back to our Airbnb. We swam and relaxed for a few hours and headed back to Disney Springs. We had dinner reservations and Maria & Enzos. The food was ok, the service was ok, and the ambiance was ok. We wouldn’t go back again.

We did some shopping and then headed back to the Airbnb.

Thursday was a rest day for the girls so we swam and then went shopping at Disney Springs in the afternoon.

The boys went golfing at Buena Vista course and had a BLAST!

Friday we went to Seaworld. It was a touch adjustment from Disney to SeaWorld If we did it again, I would do SeaWorld first and then Disney.

Saturday we did Island of Adventure at Universal. We were finished around 2pm so we headed over to Disney Springs for some last minute shopping and dinner at House of Blues. The food was excellent. The kids made M&M’s with their pictures on it. That was a hit.

Our flight back left at 2 PM from MCO on Sunday. We had to be out of the AIrbnb by 10AM though. 1/2 of our party decided to lessen the load in the SUV so they took a Lyft to MCO and the other 3 of us took the SUV back to drop off and then met them at the terminal.

Here are some other random pictures: 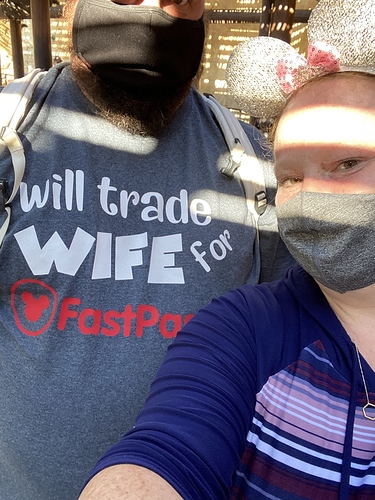 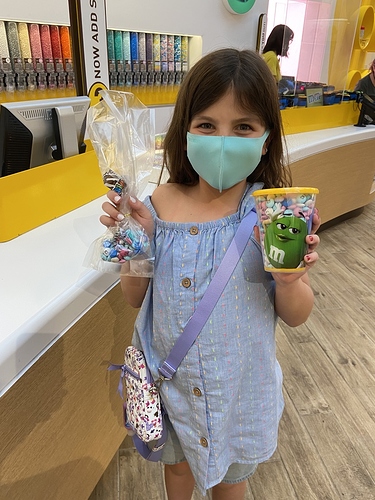 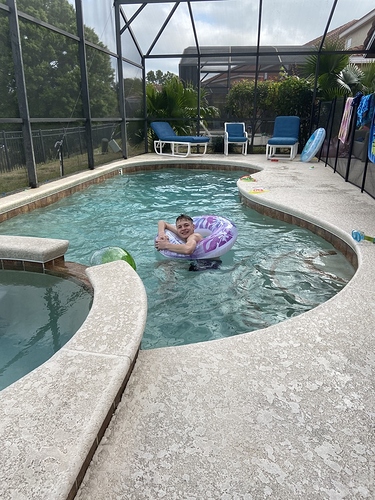 I hope you enjoyed reading the trip report and I’d be happy to answer any questions!

Yeah he got a lot of comments on that!

Nice report looks like a great time. How “worth it” do you feel the preferred parking was compared to regular?

For all parks, I would definitely do it again. My mom is almost 70 and she appreciated the shorter walk to the car at the end of the day. I still say that HS has the least advantage if you aren’t one of the first few cars into the lot because of how their lots are set up.I think for the extra $20 ($25 on weekends) it was money well spent.

Makes sense, I’m going to have a hard time giving Disney another $20 a day though. We plan to arrive once the tolls open and hope we end up close lol

We are thinking about staying off site for our first time. When you arrived at the parking lots, were they already letting people through? What is the earliest they let those who park drive through? Great trip report, Thanks!

We strived to be at the gates at 7 (but not before). If you arrive too much before 7, they make you detour and then you have to do a U turn back to the entrance gates. I think they started letting cars through the gates around 7:05-7-10 each day. We were no more than the 10th car back any day and it was a short wait each time. I hope this helps!

We paid for it a couple of times on our last trip since we rented dvc points and weren’t paying for resort or park parking. Without the trams, well worth it, especially at the end of the evening. Also, if you hop late, you can just use your preferred pass from your first park. They don’t even look. We parked front row at AK about 2 hours before close and just hung up our preferred pass from hs earlier in the day. There weren’t even attendants directing people.

Fun trip! We love the space of offsite house especially w a larger group tho like doing a few days onsite too at the start. Our best vip parking was going to Busch gardens where we just followed the attendants’ directions & parked where we were told only to find we were in preferred parking as our offsite villa parking permit was the same colour as the BG preferred label. We kept quiet and stayed there!

Nice! No complaints about that!