Alright, calm down, I have no new information. No need to panic!

This might get long, so turn back now if you’re worried about where I might be going with this.

Now, obviously everyone agrees that Splash Mountain is the best attraction in all of WDW if not the whole world. It is an undisputed fact. I understand the reasoning behind re-theming it,and I don’t want to debate the merits of that decision here. I know another thread went into that quite a bit a while back. What I want to talk about is the decision to give it a Princess and the Frog theme. I have no problems with that movie, although I don’t get the connection between New Orleans and a waterfall. But I digress. Anywho, as I was driving the kids to see my inlaws this morning, we were playing a guess the song game with Disney songs. There was one movie that had songs keep popping up that were fantastic: Moana. I think it would have been a great choice for Splash Mountain! Water is a huge part of the movie. The music is AMAZING! The biggest problem I see is that it would need to somehow become part of Adventureland since it doesn’t fit with Frontierland (not that PatF fits anyway). But at least a mountain makes sense in the Moana story. There’s barely even hills around New Orleans!

I can just picture a big finale scene with Maui singing You’re Welcome!

Okay, that’s it, go about your business. Nothing to see here.

We have monkey hill

Doesn’t count for these purposes

Maybe it will turn into a whole retheming of Frontierland. Hmmm. PatF doesnt fitbin WDW but isnt it close to N.O. in DL?

I can see it! Someone else suggested Pocahontas which I also liked. Unfortunately I think Disney wants a two for one with DLR. At least there it’s right next to New Orleans Square!

Ha ha! Yes it is! We were responding at the same time!

Great point…Splash is very close to N.O. Square in Disneyland. It does match well and am excited about the re-theming. That being said, I LOVE Moana and love this idea too! The lush mountain, the music. That’d be so wonderful too. Wish they could build another attraction for Moana. Moana is all about adventure.

You know when you enter the laughing place and you see the jumping water? Wouldn’t that be the perfect place for a giant crab singing Shiny?

Wouldn’t that be the perfect place for a giant crab singing Shiny?

That was another part I thought would make a great scene!

My son and I talked about this when we knew Splash was going to be replaced, but before we knew about the Princess and the Frog. People were upset when I mentioned it…putting Moana across fro TSI…sigh…very upset.

before we knew about the Princess and the Frog

I didn’t really think about it before, it was just the songs that made me think of it. That ride needs a big song to replace Zip a Dee Doo Da and I’m not sure PatF has it.

Moana is one of my favorite Disney films from the past decade or two. I’d be fully on board for Moana at WDW. PatF in DL works great though.

PatF in DL works great though

If the theory is that WDW should have things the same as DL I say redo Space Mountain first.

Someone else suggested Pocahontas which I also liked.

Why cant they do Pocahontas at WDW and PofF at DL? This would make much much more sense for both parks. Keep the ride the same, just different characters and theming.

Moana does have an amazing soundtrack.

“Robinhood and Little John float’in through the mountain. Running from the Sheriff what an oo-de-lolly day!” (I took some liberties with the lyrics)

I have to say: you cannot replace Splash with Pocahontas. As a resident of Massachusetts , I am going to say that movie does receive negative feedback on its representation of native Americans?

I like the Robinhood idea. They are in a forest. They could change the mountain exterior to be forest like! But I think they are doing PatF and then, down the like, Frontierland will be changed up to something else.

No, Robinhood takes place in England, it cannot be part of the land themed around the American western Frontier.

I, too, am a huge fan of Splash Mountain but fully understand the need to replace it. I just wish we could keep Zipadeedodah… but I know we can’t! Anyway, my family is very excited for Princess and the Frog! (1000% agree with @PrincipalTinker that Pocahontas also just introduces more issues and also fits in probably less with the Frontierland theming!)

This is the best image I could find that kind of seems to replicate the feeling of floating along that Splash really does well. I don’t think the drop necessarily has to be a waterfall, but if perhaps you are frog sized it could be any sort of fast moving water or even a storm as part of the bayou. I also think that P&tF has a bunch of great musical numbers! 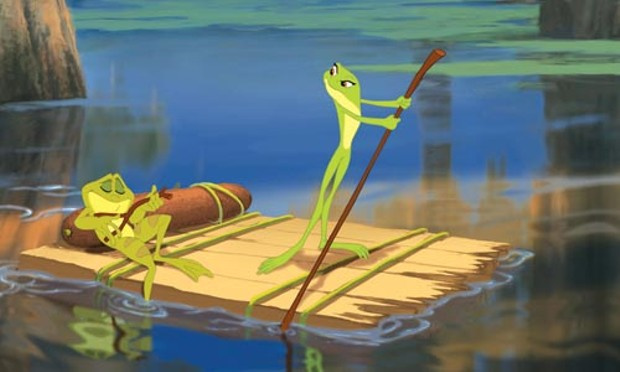 Now I’m Moana’s #1 fan for sure, but something about that land and that area doesn’t really feel Moana to me. And maybe I don’t have enough imagination but I think that any Moana ride needs to be more open (open ocean) than inside a “mountain” even if that was a volcano or something. I do like the Shiny cave idea, but I think they’d be hard pressed to make an entire ride about that.