I’m sitting here trying to come up with possible touring plans in case we do go through with our trip beginning of August, and it occurred to me there’s a possibility some rides will not be open. I’ve never been on Millennium Falcon, but if they only put one group per ride, it would just be me and DS -would we be pilots, gunners, engineers? Can the ride even function with just two people? What about spacing on FOP-would they still have everyone in the preshow room? Will ROR even be offered? Any thoughts or speculations?

Millennium Falcon Smugglers run can function with a party number less than 6.

There was one time I rode it where I operated the gun as well as repairing the ship. The cast member modified how the “simulation” went so I could control more than one function from my chair. I was able to be a gunner and also an engineer.

I am not sure how they would make it work with just two people. The pilot controls are separated out into two individual control sticks: One for up and down (back and forward on the stick) and the other for left and right (left and right on their stick). If you were able to sit in the two pilot seats, I am not sure how they would integrate the gunner and engineer. The controls for both of those are too far back from the pilot (on the wall) to reach while still piloting the falcon.

If they would allow people in the pilot chairs (family members) and then either one or two more people in the back chairs (engineer), then I could see it working. The engineer could repair the ship (their controls) and reach the gun button.

The queue for MFSR is possible with proper social distancing. I can even see them allowing you to do the preshow.

As for all rides, I believe I heard on Disney Dish that they are considering having everyone enter the rides through the FP line. This is typically the most direct route and typically does not double-back on itself. Most rides would probably bypass any preshow elements that have large groups held captive in a closed space with other guests.

Now to speculate on the other rides you mentioned.

FoP - It may be possible for them to have you do the preshow if they spaced people out far enough from each other (the body scan and avatar pairing scene), but it may be a bottle neck if they do allow that to happen. I can not see you getting that many people in the room; as it doubles back on itself. Most likely they would have you walk directly to your “bike”. I could see family members together, and then maybe one or two bikes between your family and the next.

There are 8 bikes per room, 6 rows per theater and 4 theaters total.

RotR - This one would be tough, but could be possible. The long walk queue before the first preshow might be possible if they make sure guests keep the 6 feet apart and they minimize the switch backs through the caves.

The first preshow could happen if they taped out areas on the floor and assigned guests to their own little taped areas to watch it.

The first simulator would be tough. It may be possible if they did not pack the people in and went to maybe a 1/3rd of the capacity. They could tape out areas to stand in for guests and assign it to them. If Disney is uncomfortable with that, they may bypass this portion all together and take you into the next show scene through the “back-door” (This happened to me once when the first simulator was not working. It kind of takes you out of the whole immersive story.)

The next area is doable as it is a wide open room. When the CMs pull you off of the simulator, they could do that in family groups and direct you where to go/how to stand/etc. It would fit well into the story at this point. They would be barking orders at you the whole time.

The next part where they “delay” you in a location could be done as the room is large enough to space out a few families.

The remainder of the ride happens in this vehicle and you do not get too close to any other guests.

The other thing to keep in mind, while more spacing is preferable, the full 6’ might not be absolutely required if everyone is wearing face coverings. That is part of the point of the face coverings, “when distancing is not possible”.

In queues, it makes sense to do full 6’ since there isn’t really anything to be lost from the experience, but I think things like MFSR, they might be able to be a bit more flexible if it would negatively impact the experience. For instance, 2 parties of 2 might be considered sufficient spacing with face coverings.

That would work. There could be two pilots and the other two people perform double-duty on the guns and ship repair.

We have not gone to HS since SWGE opened, so I would not want to miss those experiences. Those two rides and FOP were the first to pop into my head about how they would be handled. I can’t think offhand of any other rides that could be seriously affected. Maybe Mission Space?

@Shellott-hill — I was just looking at your MFSR / FoP thoughts but, I’m a quick enough reader that my eyes went further down than I would have preferred…

Please edit this section with a spoiler tag!! 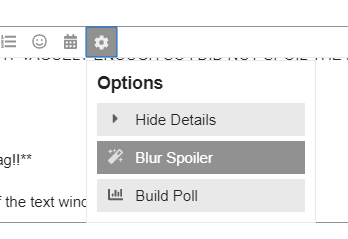 Millennium Falcon, but if they only put one group per ride, it would just be me and DS -would we be pilots, gunners, engineers? Can the ride even function with just two people?

I’ve asked CMs on Twitter about using “auto-pilot” for all the positions on MFSR. My wife gets bad motion sickness. Having to look to the side to do the controls and then back at the screen would definitely trigger it. You can tell a CM you only want to “ride” not participate. I’ll bet that’s how they’ll be doing small groups.

Universal is giving groups of 1 & 2 their own cabins for Hogwarts Express and other attractions where you are in a shared vehicle.