Some insight into Tower of Terror please

For those of you who’ve ridden ToT, I have some questions. Let’s pretend I’m asking these for DD10 with whom I’ll be travelling on our father/daughter trip in a couple weeks.

If I, um, I mean she, had a fear of heights and was claustrophobic but really wanted to ride this attraction because it’s supposed to be amazing (UG calls it the best attraction in any Disney park, I believe), what would you say to me? I mean to her.

Does the height thing really play into it even though the window only opens up for a moment?

Of the entire attraction, for how long are you seated? How much time is in the elevator shaft?

Thanks,
cgulls
asking for his daughter.
not for himself.

I would say the elevator itself doesn’t feel claustrophobic and because it’s inside you get very little sense of the height except for a few seconds when the doors to the outside open. Seriously the scariest part of the ride is the anticipation, the actual drops are over before you know it. Plus since the drops are randomized you rarely drop the full length of the tower it’s several different drops of varying length. I think everyone owes it to themselves to try it at least once. I’ve met a lot of people that thought they would hate it and now love it.

ETA: I agree it’s one of the best rides in all of the parks.

Per TP.com, the duration of the ride is 15 minutes. Is it really 15 minutes in the elevator?

No there’s no way. It’s probably 4 or less I would think. They might be timing it from the pre-show in the library and then you wait in another short line until you are assigned to an elevator. @len can you comment on the timing?

I agree with everything @Outer1 shared. Definitely not a 15-minute ride total, unless timing from the pre-show (which is great!). You won’t have a sense of the height until the doors open. Even then, it’s nothing like the sense of the height you get riding in the front on EE, for example. ToT is tied with EE for my favorite ride - I hope you try it!

I would say do it. I am terrified of free falling rides. I can never convince myself to ride any other free fall rides at any other park. However, I went on the Tower of Terror, and the moment of bravery paid off. It is one of my favorite rides at the park.

I am like you, I mean your DD10, I do not like heights, but this ride is and always will be my one exception to that fear. I think it has to do with the fact that you do not know how high you are until you are riding it and I trust Disney and their maintenance crews to keep us safe.

I can’t speak to clausterphobia, but I will say the ride does not feel very long. I would say 4 minutes is even a stretch if you take out the video portion.

I’m afraid of heights too, but the ToT doesn’t trigger that fear in me. Even though you are high up, you’re still enclosed in the building. I would say Soarin’ triggers my fear of heights more than the ToT does.

I’m generally not to fond of dropping rides either, but the ToT has become my favorite ride at DHS and DCA. You, er, your DD10 should definitely do it at least once.

The ride vehicle is far from tight, you definitely have more space than in a normal crowded elevator. And As other’s said, you really don’t have a huge sense of height either, just a few seconds with the door open, and if your not in the first row, its still pretty far to the visible ledge.

I agree with the others. I have a severe fear of heights, I can’t even look over the railing from the second floor of the mall. This doesn’t trigger on ToT because you really only get the up and down feeling you would get from a roller coaster.

I also have problems with anxiety and have not had a problem here either. The ‘elevator’ is big and you aren’t crowded in there.

One of my FAVORITE rides for sure!! I can’t say I don’t get scared, but it is FUN!

My DW is somewhat claustrophobic and has a mild fear of elevators (she got trapped in one for several hours once - but that’s a story for a different day) and she enjoys it. I am generally not a fan of “drop” rides at most parks, but I love this ride; the drops are almost secondary to the overall ride experience. Height is really not an issue. Yes, the doors open briefly, but the “edge” is far enough away from the elevator, it’s really not much different than looking out the window on the 10th floor of a hotel.

I have to agree with others; it’s probably the most perfectly themed ride, from the moment you enter to queue to the time you get off, in any of the parks (although I would argue that Indiana Jones in DL may have it beat)

These replies are the best combination of understanding my concern and answering my questions (with the answers I hoped for) that I could have asked for. You guys rock. Thank you!

If I get too anxious, I’m sure DD10 will help me through.

Okay first I am writing this before I read what everyone else says, so forgive me if I say the same thing.

You do not fell claustrophobic The elevator is large, and you are seating, no more uncomfortable than a plane, and for a much shorter duration. The whole thing from the elevator door closing to the finish is no more than 5 minutes. There is a lot of build up, and you only get a small sense of how high up you are. Mostly you feel the freefall, that is the fun of the ride, You actually lift up in your seat for a few seconds before you are brought back up. Each time is different.

For me it is not to miss, but then again I did it 5 times in a row the morning I was there and RNRC 5 times in a row too. I am a thrill junkie, pure and simple. I did not feel scared but I did scream when you feel the lift of freefall.

The library is like the haunted mansion in they pack you in for a little show before a door opens for the trip down to the elevators, that probably is the most claustrophobic part. So if you can do the Haunted Mansion, you can get through the preshow.

So in conclusion, go for it!!
This is what the elevator looks like, PS that’s me holding liner Kermit! 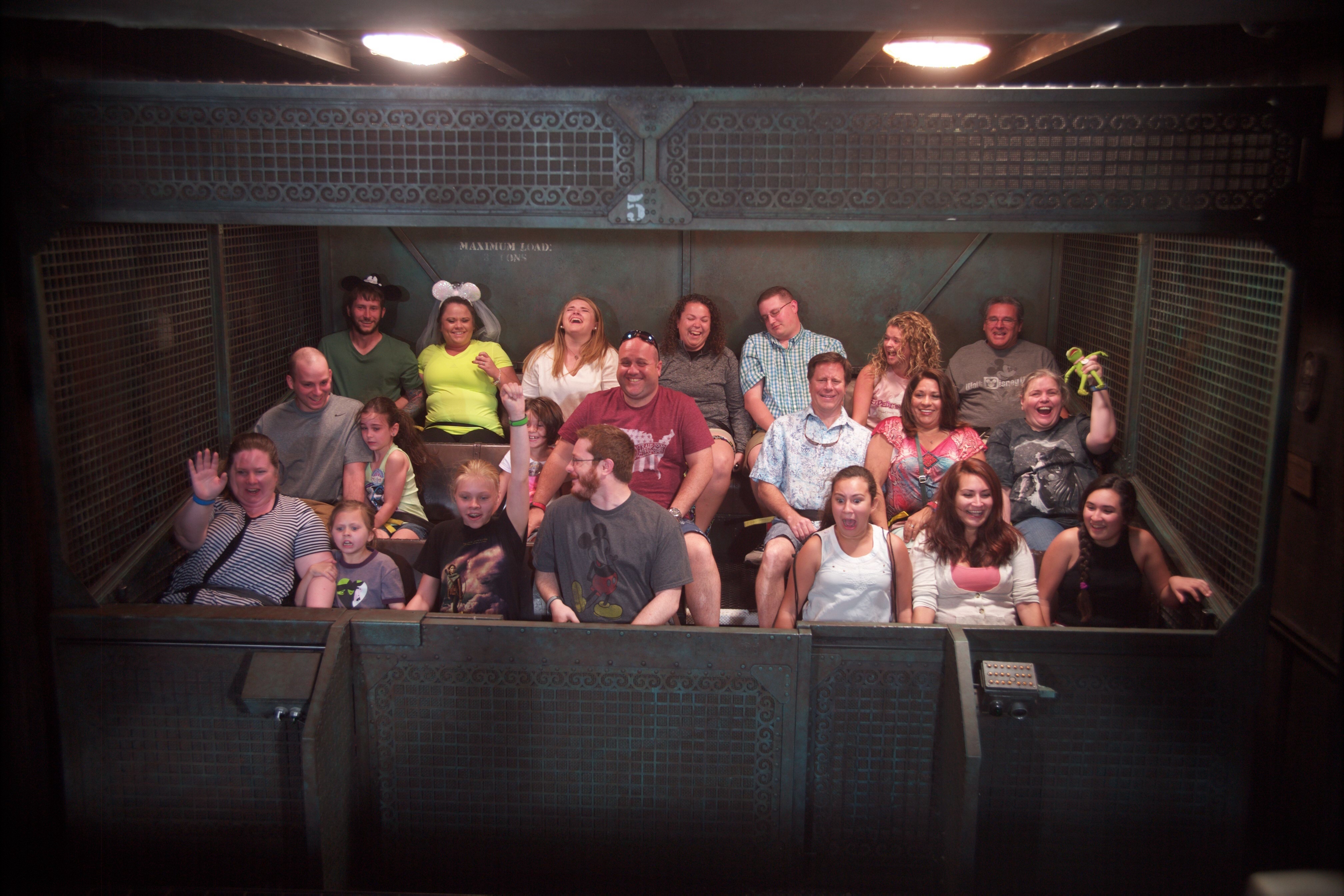 Love it. Thank you. Of course, Because I was so selfishly worried about my own phobias, I wasn’t really thinking about DD10. Two of the three kids in the photo who look to be closest to DD10’s age don’t look like they’re having too much fun.

She’s been asking to go on ToT. She hasn’t done many thrill rides before. BTMRR is as the most aggressive so far. She’s read some heavy-ish books but we don’t let her see too much “creepy” stuff on TV or movies. She got a little wigged out at the bar scene in Star Wars when Obi Wan’s light saber lopped the tough guy’s arm off.

She’ll be OK on ToT? And enjoy it?

When my older kids were 7 and 8 they were more freaked out by the preshow stuff than the actual ride. My son didn’t want to ride it again but wasn’t traumatized by the first time. My daughter wanted to do it again and again. Later when they were 10 and 9, my son still didn’t want to ride but once but my daughter wanted to over and over. Last year my friend and I took our youngest kids who were 5 and both boys LOVED it. Bottom line is that it’ll depend on the kid. If HM doesn’t freak her out, the preshow of this shouldn’t either. Sometimes they look terrified and then leave the ride begging for more. I still say go for it at that age and if she hates it then don’t do it again. : )

Full disclosure: I hate drops. On roller coasters, I love the corkscrews and upside down stuff, and turns, but hate the drops.

I hate the drops on ToT.
And they’re not even drops.
You’re reportedly actually PULLED down at a rate that is faster than a drop would be if gravity kicked in.

I usually endure this ride once per trip because the theming, the effects, and the view (which is all too brief) are stunning. And because its a must-do for my daughters.

The drops don’t last long.
They really don’t.
But they’re random, and though I’ve never actually counted them (terror is not conducive to maintaining one’s ability to count simple numbers), I think there could be as many as 6 or 7.
They’re hellish.
Most of them are lightning fast.
But there’s always at least one long one.
By the time you get to the last one, you’re oddly almost used to the hell.
You almost get to the point where you might actually be almost ready for the next drop.

But then you’re done.
But one time, we weren’t done and there was one more.
Just to mess with you.
But not every time.

And then it’s on to rock n roller coaster which has lots of corkscrews and upside downs, and turns, and almost no drops, because you’re propelled from the outset, so there’s less need for gravity.

It’s my DD12’s favorite and has been since she first rode it at the age of 10.

I can only hope this helps to prepare you.
Go well.

I don’t like heights at all but I would not miss this ride. Doesn’t trigger the fear of heights with me at all. Theme and execution make this a great ride. I don’t think it will affect claustrophobia either. I’m skipping most any other free fall ride, love coasters despite the fear of heights, but will ride ToT as often as my motion sick DW will allow (without her). Rode it a couple years ago with my nephews who were 7 and 9 at the time and they both loved it.

There is nothing gory, just suspenseful. If she really wants to do, go for it, it really is a great ride.

Have her watch a few videos first to know what to expect. Like I said the preshow is similar to Haunted Mansion. Make sure she sees that in advance. If I remember rightly the picture is taken just before the first drop.

(When I was her age seeing Star Wars in the movies I too did not like that scene.)

Damn, bro, all the other posts got me feeling pretty pumped up to ride. Then here you come, @ejj, with your darn honesty.

I was checking this to see if the ride was age appropriate for my kids (8 & 10) now I’m seriously concerned about whether its appropriate for me. I hate drops. I ride space mountain with my eyes closed to make my family happy. It sounds like it is worth the terror and will likely give it a try. thank you all for the insight.

I feel the same way. The drops make we weak at the knees, but otherwise it is a really cool ride.