Short version of a trip report

Thursday
Travel day. Arrived at the hotel, swam, ate lunch, and had dinner with Goofy.

Friday: DL Crowd 4, DCA Crowd 6 (early Entry)
We left our hotel room at about 7 am and were at the gate to DCA at 7:15. We were one of the first people and thus first in a line. Our girls were decked out in princess attire. The CM let us in to welcome everyone into the parks. Maybe a highlight of the trip. Being alone in the parks. That will never happen at the end of the day for us because our kids can barely make it through the night time shows.
We did Luigi’s and Maters and then RSR. We arrived at Soaring a bit before the regular rope drop but it seemed to still take a long time to ride. By the time we exited, our return time for our rider swap at RSR was almost up so I didn’t get to go back to that ride today. We went over to Toy story and then back to Soaring so dad could ride. I can’t remember most of the rest of the day. I know we did guardians of the galaxy, saw frozen, and some other rides. We left the parks at 6 for dinner and early bedtime to get ready for EE the next day. We did take our daughter on Guardians. She was terrified the whole time! I feel a bit bad, but she loves big rides so I am glad she tried it. Her whole body was shaking by the end of the ride. We did not use MP today but still accomplished most of the rides in the park and watched Frozen. 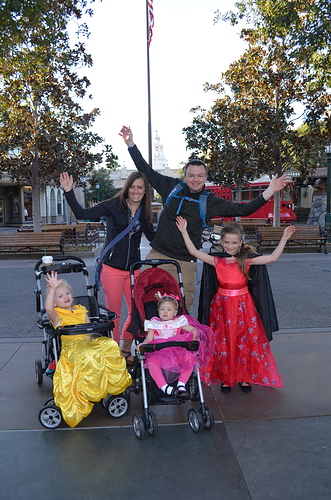 Saturday: DL Crowd 6, (early entry) DCA Crowd 6
We arrived at the gates before 6:30 (can’t remember exactly) We were a family or two back in line. We made our mad dash to PP and were about 20-30 people back in line due to stroller parking. The ride wasn’t up and running yet so it took about 15 min to ride. After that the morning was smooth sailing. The park seemed empty until about 10-11ish. We did most of FL and matterhorn by about 9. We did see mickey and the magical map, fantasyland theater, and Fantasmic. We did the Hungry bear dinning package which I would highly recommend. The food was decent (BBQ chicken was much better than the Salmon.) But the ease of getting a reserved spot to watch at sit down for the show were priceless.

Sunday: DL Crowd 5, DCA Crowd 7(Early entry)
We decided to “sleep in” a bit today and went to regular rope drop at DL to get in line for the Jedi training. I ran over to DCA to get WOC tickets and then joined them in DL. We went and rode pirates after jedi sign up (which only took about 10 min) and walked right up to the boats. Then we rode Indiana Jones. They would not give us a rider swap since the line was short and we had FP for the whole group already. One car from getting off, the ride broke down. My daughter and I sat in the car for 30 minutes. My daughter (age 7) almost had an accident waiting to get off. I tried to get pass for her to return with dad since his fastpass was still good (and they didn’t give us a rider swap) but they only gave us a 20 min window to return. They told me they were being generous. I was quite irritated since they wouldn’t let us off the ride that close to the exit for 30 min and then were rude about it. While the family rode space mountain I talked to guest relations and got her a return pass for IJ so dad could go with her and not ride alone. We ate a late breakfast with Minnie at the plaza and then caught a couple of rides before Jedi training. After a ride or two more we returned to the hotel for naps. We booked some FP for the evening at DCA and then found spots on the bridge for WOC. I have to say, I am SOOOO glad I read about this location from fellow liners! Our kids sat in their strollers for a “front row” seat and loved it!
I tried out MP for the first time today since I knew it would be a busy day and we planned on parking hopping. I loved it and I couldn’t resist the next two days.

Monday: DL Crowd 3, DCA Crowd 5(Early Entry),
We arrived at the gates to DCA about 35 min before early entry only to find the later start means a LOT MORE people! We were about 30 people back in line even though only about 10 minutes later than usual. We also were in the line Allen was working. NOTE if you ever get in Allen’s line and are in a hurry…. Change lines!! He had to be the slowest ticket taker I have ever seen(sorry Allen ). By the time we got into the park, the rope was gone and cars land was hopping! We rode most of DCA today again and also caught the Lunar processional, news boys, and Disney Jr today. We sat on the front row for the processional and the cast was very interactive. Mushu came up to my littlest daughter. I don’t know if he was trying to high fiver or what, but she fell over backwards. She takes a second to warm up to the furs. He came back towards the end with a much slower approach to “apologize” with a high five. We watched WOC from the same spot as the night before. I debated going down into the regular blue zone spots, but decided my kids loved this spot… why mess with a good thing?!?

Tuesday. DL Crowd 4 (Early Entry), DCA 3
We knew we needed to be much earlier today for EE into DL. We arrived about 1:05 before opening and were behind about 2 families. One was let in to “open” Disney and our line split into two lines so we were able to be first in line into the parks. We mad dashed to PP like usual only to find a rope drop. This is the first time I’ve seen a rope drop at DL for EE. Granted we have only been for 3 EE mornings total. We were about the 10th person to arrive at PP but they told us to park our strollers at the carousal which put us back about 30 people. But, the ride was running so we were on faster than on Saturday. By the time we got off PP FL was BUSY!!! Every ride had a wait time of 10+ min. This was very frustrating because we were used to a Sat EE which meant we could walk on to rides at FL for about an hour. I went to go get F! FP but while waiting with a mass of people I decided the hungry Bear package would save us a lot of headache, spot saving 1.5 hours early, and wasn’t that expensive. The dinner cost us $115. For WOC the night before we ate corndogs, churros, and coffee which cost us $60 and wasn’t a very big meal. So for a full dinner, a front row spot to watch the show, and not having to line up early, Hungry bear was totally worth it. We showed up for F! around 7 for a 7:45 show and were in the second row of people. We passed massive amounts of people that had obviously been waiting in their spots for the show for a long time. But we did get wet this night!! We were misted on the whole show. I didn’t remember that from Saturday. Saturday we sat at the very right edge of the hungry bear seating, so almost center. Tonight we were about middle of the hungry bear seating. I’m not sure if it was our seat location or wind, but we were much wetter tonight! I also splurged on another dinning package because I felt a good view of F! was great way to end the trip. Afterwards we went and walked through FL. Found a coin machine that had be eluding us. We were going to try and find one last ride, but the waits were all over 10 minutes at 8:40 when the park was closing at 9. On our way out, the castle was blocked off and some crew members were up on the castle. Look back, that should have been a big clue for us, but we had never been there at close and just thought it was something they did at closing. Once the kids were all tucked into bed we heard loud noises. I ran out of our room and down the elevator and past security. They were running fireworks??? I was so disappointed. I downgraded our downtown Disney room view since there would be no fireworks (this saved us $300 that we could spend on our dinning packages) I heard on the app chat, people think they were testing fireworks for the pixar stuff coming up. So bummed I did keep us out a bit later.

Things I learned this trip.

Well I’m sure I have tons of typos, but I need to get my life back in order since I spent the last several weeks planning our trip and going on our trip. I figured I should jot some notes down now and then get back to reality!!

Sounds like fun!! I agree about the early entry. When we went in August we went to the park without early entry and it was awesome!!