Rules you didn't know were rules

I was going through the photos I took at WDW this summer and I found this one, which reminded me of the really awkward moment it captured.

I was at Crystal Palace for breakfast and was having my photo taken with Piglet. Tigger walked by so I put my arm round him, too and said, “Yay! I get to cuddle both of you!”

But Tigger immediately wriggled away from me and the CM said, “You can only have one at a time.” They both marched off.

It felt really awkward and the CM spoke to me like I was a naughty child.

It’s made me reluctant to do character meets again, to be honest. 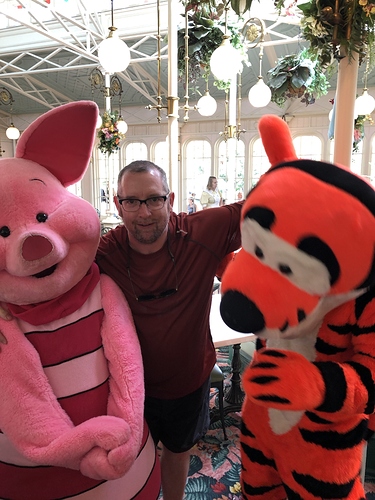 It’s just for efficiency. Don’t let it put you off!

Don’t let it put you off!

It was the curt way she said it. Like I really should know better and maybe I should go stand in the corner and think about what I’ve done.

I totally get it. I had a terrible photo experience at BOG with the character lead assisting The Beast. We were the ONLY people in the room and the CM shouted at us like a drill sergeant - to the point that my DD17 almost cried. (She’s a strong young lady and this CM almost brought her to tears)

I’m not done with Character M&Gs, as I love them, but I’ll never go back to BOG for dinner.

The characters and CMs also get grabbed often, by adults - this could have also been more that and just not explained well.

Yeah, I guess my intentions might not have been clear. I was overcome with childlike enthusiasm rather than anything more aggressive.

I didn’t know you could bring in a service horse.

Thanks ADA! If you have to have a service pony, you have the legal right to bring it ANYWHERE a service dog can go too, which is basically everywhere.

Not handled in the best way customer service-wise, but I think the concept behind the rule if that if one person gets a photo with 2 characters at a time then many others will want it too … and that is not feasible timewise.

He did say horse, not pony…

If I could get Calvin on my flight (there’s room for him in my little section in business class) I would totally slap a jacket on him and claim him as an emotional support animal. Which, quite frankly, he is. You all know me to be a rational and stable person, but that’s only because he’s sitting next to me calling me down.

Not handled in the best way

As much as anything it was the way he wriggled away from me. It was quite unsettling.

The Americans With Disabilities act only specifies two animals that can actually serve as service animals: dogs and miniature horses. It’s a real actual thing!

Truth be told, they couldn’t ask you more than two things:

Of course that is for SERVICE animals. Not emotional support animals. That’s not a protected thing.

I wanna bring in a service horse.

Are you limited to only one?

Yes
He snuggles him.

Seems pretty clear to me

Snuggles is not work or task

That could be reworded: he recognizes when I am about to have a panic attack (or an attack if you would prefer to be more vague) and he helps me get into a safer position.

That could be reworded: he recognizes when I am about to have a panic attack (or an attack if you would prefer to be more vague) and he helps me get into a safer position.

I’m just going to copy that text and paste it into a document for use later if you don’t mind.