We are going on Dec 17, planning to be there very early, to improve the changes of being one of the first ones to ride RoR that morning.

Our plan was that once we are done riding it, we were going to go back on the queue right the way, if it was less than 3 hours, but with this boarding passes, I’m all confused.

Let’s pretend that we accomplished being one of the first people to enter the RoR queue that day. As we are walking on the queue for the first RoR ride, rather than just wait for the ride to be done, and walk out of the ride and go back on the queue again. Do we sign up for a boarding group and wait to be ask to go to the queue?

Being in a boarding group does it means we will have the ability of ride RoR that day again, if it doesn’t break?

Once you were done, you would join another boarding group. Yes you could ride again.

. Do we sign up for a boarding group and wait to be ask to go to the queue? 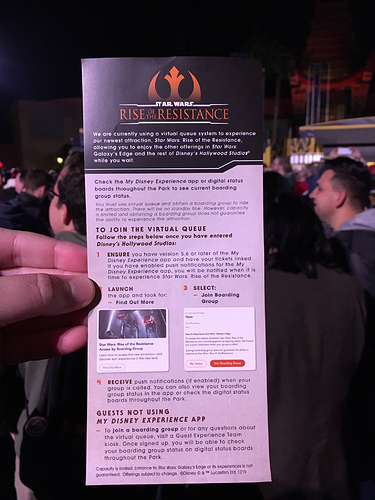 EDIT - These paper passes are what were given out to people who had to evacuate when it broke down first thing this morning. 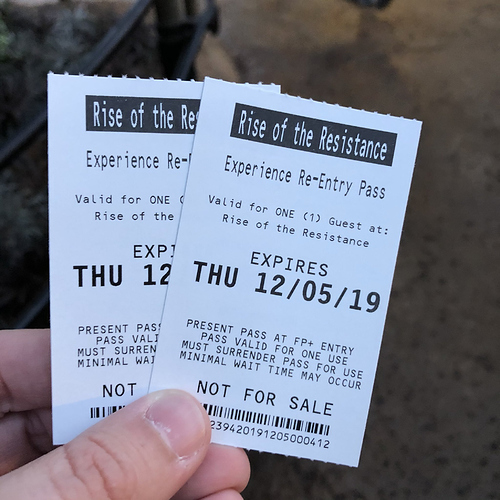 darkmite2 that is gold! Wow so you were there last night?

It is clear that they won’t have physical standby lines for RoR, which means that is all virtual lines, so we sign for the boarding group and walk away.

When do boarding groups become available? Once once the park opens or once the queue reach certain point?

So for Smugglers Run there is not boarding groups right?

If this is correct we could exit RoR sign in a boarding group for the next RoR ride, as we get in the queue for Smugglers Run.

Wow darkmite2 and you have two fast passes for RoR for today!

darkmite2 that is gold! Wow so you were there last night?

No… I wish. I’m just a DisTwitter / Podcast nerd. I work a dull job and can be online all day. I pulled the pics from Twitter (@Schmoofy)

It clear that they won’t have physical queue for RoR, which means that is all virtual lines, so we sign for the boarding group and walk away.

They do have a queue, but once the land hits capacity they convert over to Boarding Groups

When do boarding groups become available?

WDW / DHS gets a pretty good idea of capacity from the tapstiles at the Main Gate. Once that get to the “magic number” they start doing BG. (idk what that number is… only WDW does)

So for Smugglers Run there is not boarding groups right?

At the moment. This could change if the land gets even busier - like over the holidays. WDW know that the majority of the people in SWGE today are media / bloggers that only want to ride RotR.

Nice having a plan! Thanks

There isn’t a stand-by line for RotR today. So if they are using the Boarding Groups, the only way to re-ride is to get into a new Boarding Group.

And as I posted somewhere in another thread, another thing to note is that being in a BG doesn’t guarantee that you can ride. If the ride goes down, or their estimates are off, then the later BGs won’t get called.

Thanks Nickysyme, it makes sense.

Which - on the page looks annoying… but everyone there at park open got on today, right?

I don’t think everyone there at park opening has got on yet.

At one point, it seemed like they stopped Boarding Groups at around #120 but later I’ve seen someone say they got #154 when they re-opened bookings.

But around an hour ago I saw they’d just called boarding groups up to #60. That’s still a long way to go.