Evening all, I’m planning 2 MK days. The 2nd day will be Fantasyland rides with CRT, parade and fireworks. So that leaves the rest of it to day 1. I’ve split it into Tomorrowland followed by Crystal Palace brunch, then Frontier and Adventure land. I’ve done mini TPs for each land then put them together in one big plan. However, It has me rope dropping Speedway!!! I would have thought space mtn would be higher priority. I’ve never attached a photo so fingers crossed this works 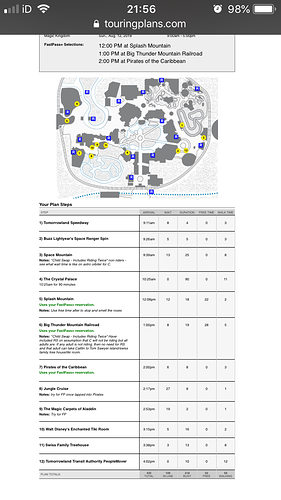 I am curious what people say because mine has Rope dropping Laugh Floor. I would think that Peter Pan would have a higher priority??

Speedway can develop long lines and TP will often recommend going early or even using FP.

Just a word of warning though, when we went early in the morning, it was still slow loading because crowds hadn’t built yet and they were only running one lane of cars instead of the whole ride.

Its been awhile since I have set up a personalized plan, but I remember an instruction to optimize several times until end up getting the same schedule. And then optimize the day of as well to get the updates. Those rope drop attractions seem strange, so maybe that’s the answer.

One thing to consider here is that the Optimizer is looking to find the best overall plan based on the attractions that you have picked. Sometimes it appears to be making strange choices, like not rope dropping a popular attraction, but that may be providing benefits that are not immediately obvious.

I clicked on this thread because I thought I was going to learn something I didn’t know about the gas station.

What is your setting about minimizing walking vs waiting set to?

I would put in a support case. I had some interesting recommendations to go to mission to mars at rope drop at Epcot, and they fixed it after I reported it.

I would recommend RD Space, get Child Swap, then Buzz, then Speedway, then backtrack for other Space ride based on CS, while small child and other parent ride PeopleMover.

Computer programs are not always infallible. I too would RD Space. Yesterday I moved an optimized plan around and it resulted in less time and wait.

Computer programs are not always infallible.

I think the computer programs are doing exactly what they are programmed to do. It is the PROGRAMMERS telling the programs what to do who are not infallible!

I love this!
I say something similar frequently - things are always ‘broken’ logically. Systems do what they were coded to do - but the code doesn’t always do what you ‘really’ wanted it to do LOL

Also, this may have been said above, but make sure you add your FPP one at a time and optimize each time.

That being said, I also would RD Space. When we’ve gone to TS before 10 am, waits are usually not bad.

Thinking about this scenario in a hypothetical situation, I suppose I could see how it MIGHT be beneficial, even though counter intuitive.

Let’s use a sample size of 200 people. Now, at RD, of those 200, let’s say 80% of them head to Space Mountain first, and 20% head to TS. That puts about 160 people riding SM, and 40 riding TS. Those who did TS Speedway get through the line fairly quickly because it is short, even though the wait time for TS would, all other things being equal, be longer. (Put another way, if 100 people did TS and 100 people did SM, it would take LONGER for the people on TS to get through the line.)

Now, after the initial rush, the folks from TS head over to SM. And the people from SM head to TS. Now, the line for TS increases to the 160 people, whereas the line for SM has the 40 extra. (Granted, I’m leaving out the non RD folks in this calculation for illustrative purposes only.)

In such a case, the folks who started at TS had a significantly shorter wait for BOTH TS and SM. But those who RD SM had a longer wait for both SM and TS.

Obviously, I’m not using actual numbers/dynamics. Just working out how the recommendation could be true.

The deciding factor is the Child Swap. To me, RD SM, get rider switch, then knock out the others in Tomorrowland then back to SM before heading to brunch.

You’re right. I was just poking fun at programmers since I am one of them!

You are completely right about everyday language!

I don’t actually program, but I have administer several systems for the business side & work on requirements for enhancements and new processes.
Commonly people ask for something to do something, but when they get it, that is not what they ‘really’ wanted it to do.
Also being ‘broken’ logically is just a funny comment we use. Wasn’t meant to say the original comment was wrong.

That’s worth knowing, thanks.

Sorry, I don’t know how to reply to individual posts but thank you all for your input. @ryan1 I was wondering if that was the thought behind. I have my settings at minimal walk so that could be affecting it too. I will evaluate the overall plan closer to the trip and also still have have mini plans so can optimise eg tomorrow land TP to see if it suggests anything else. Thanks again.