I am curious about what happens at rope drop at both parks. Are guests allowed into Main Street before official opening time, then held at the entrance to each land? Are the crowds massive? Is it chaos? Do cast members instant on guests walking once the rope drops? We are visiting on Oct. 7-12 and some days the crowd calendar is at 9, so I want to take advantage of early morning touring.

YES they will tell everyone to walk. It’s only common courtesy to walk in a crowd like that. Running is dangerous for you and all around you.

I only RDed DCA once and even though CMs were telling people not to run, some people still did (and they looked like idiots LOL).

I was with my then 5 yo son and it was crowded but fine and manageable.

Don’t get me wrong, walking is good! I don’t want to get caught up in the crowd with my two boys (6 & 7) and get trampled.

UFor DCA we have always been let in ahead of the official opening time. For Disneyland, as long as we were going for regular park opening, we have also been let in ahead of official opening time. However, for Disneyland’s Extra Magic Hour/Magic Morning (when the park is open 1 hr early for on-site hotel guests & offsite guests who purchased a 3 day ticket or more in advance), they may wait to let crowds in until the start of the magic hour. I have no idea what determines each opening procedure, but it is more common that they let the line early & fill in Main St to the hub.

The CMs do encourage walking but it is only verbally enforced, there are no physical barriers preventing guests & do you see runners at both the dash to Peter Pan and sometimes Space Mtn in Disneyland, as well as towards Carsland (Racers) in DCA. In the case of Peter Pan where this dash to the line takes place in very narrow walkways, I have also seen elbows/shoving/shouting & just general unpleasantness. And it’s best it’s a friendly but still wildly competitive speed walk (and in general most people aren’t looking out in those kind of circumstances for kids).

Photos of the dash to Peter Pan frkm Fri August 17th (predicted crowd level 4, actual 5, 9am regular park open, no extra or early entry). We took a side path from Fantasy faire (to the left of the castle when looking at it) that spits out into the same courtyard where the line for Peter Pan forms. We were heading for Dumbo but I wanted to get a sense of how crazy the dash is (since it had been some time since we were near it & had had some bad experiences with it before). While I didn’t see any rude behaviors I was glad that we weren’t in this scrum! 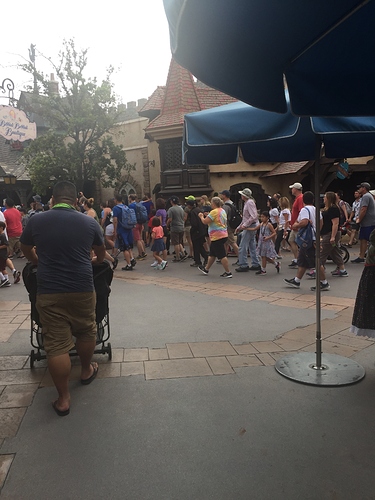 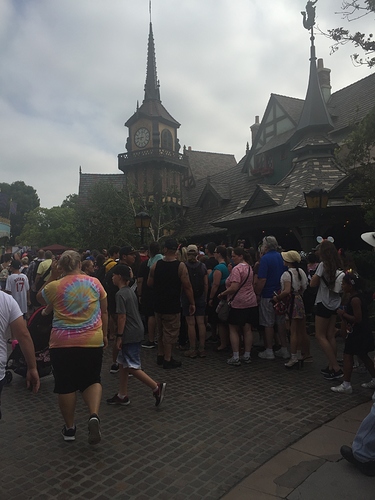 Thanks so much for the feedback!