There is a cancel button, but I think you’d need to do it pretty quick while people are still grabbing BG/BBG. (We did this when we picked BG up our second day but decided to put them back for someone else.)

I think the hesitation is wondering if they’ll go to someone that it’s their only chance to ride vs someone that’s already been several times. I think they were hoping for a way to literally give their BG to a disappointed looking kid but that’s hard without creating a scalping market.

So awesome!!! 2!!! Amazing!!! We try in 5 days for the first time!!! I love this thread and am so thankful for all the tips and answering my questions, too!!

Blockquote I think they were hoping for a way to literally give their BG to a disappointed looking kid but that’s hard without creating a scalping market.

That is what I really want to see!

Maybe we can walk up to the entrance with the child and ask if they can have our BG?

If you’re taking a BG you don’t intend to use just to give it to a crying child, consider that you’re potentially just taking it away from a different crying child by claiming it in the first place. Take a BG if you want to ride, but I’d hesitate to play kingmaker. Just my two cents.

One thought I had was to stagger when they allow trying to obtain BGs to set times throughout the day.

So, maybe once every hour or every two hours, they can open up additional BGs and allow guests in the park to try to get one, if they haven’t already that day.

That would Destroy my day at the Park. I turn up Early fail to get one, then desperatly wait always looking at watch. Just to get to point im about to get on ride as the 10 ticks over, leaving queue to try get it again, fail to tress about 12 release. I cant think of a worse system to absolutly rain a day at the park, always hopping but never getting

Yesterday had the highest BGPH since the ride opened. 6 days straight of call all boarding groups. 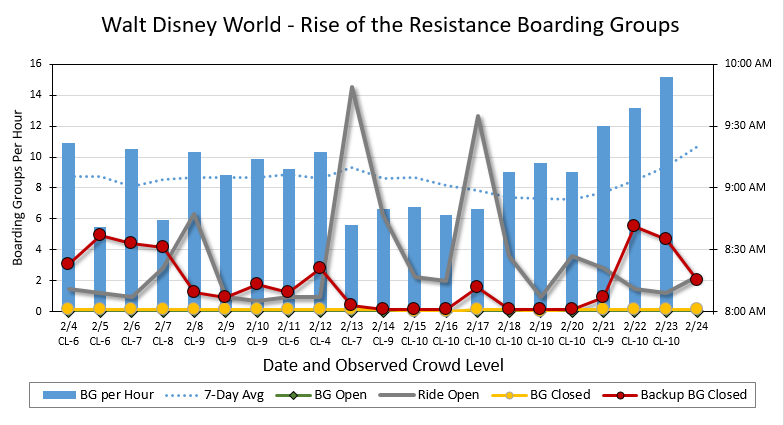 esterday had the highest BGPH since the ride opened

Oh, don’t tease us, Steve. You might end up getting our hopes up!

It will be interesting to see what happens as the CLs come down off the 9s and 10s. Of course, that might not happen with MMRR opening and then Spring Break(s). I’m going late April so I really have no idea what to expect. Makes planning HS days really difficult.

We were there yesterday and due to a connection issue at 8am for me we got BG 76. Of course well into the BBGs. We planned accordingly but the numbers kept going super fast and we got called at 12:24pm. We were there on 2/14 and it took us 1 hour and 9 minutes from getting on line to the end of the ride. Yesterday that time in total was 41 minutes.

I don’t think Crowd Level has much to do with it. Supply is so much lower than demand there will be a rush on getting Board Groups. I don’t see demand going down. Supply will increase as the ride becomes more reliable. Even with MMRR, demand will be high; people will want to do both.

I have seen conflicting information. Is it better to have multiple people in your party try getting a boarding group using their individual accounts or all devices logged in using the same account?

I have not tested the two options. I don’t see why it would make a difference. Only the person with the fasted connection and reaction time will get through first.

I don’t think Crowd Level has much to do with it. Supply is so much lower than demand there will be a rush on getting Board Groups.

Don’t think it matters. I suppose there could be a difference in which account has the “cleaner” family and friends list (without a bunch of people not in the park) to avoid the need to spend time selecting the riding group.

I would just go with whichever option is easier for you. If you already have six separate accounts in your party and everyone is linked, use it. If you are the parent or leader of a group where no one else has an account, have them sign in on your account on their devices.

Looking at the poll results, if you get in the park on time, the odds are pretty good you will get a BG or BBG.

The folks on here are more likely better informed and prepared for getting a BG but it looks like if you are in the park on time, odds are pretty good you get at least a BBG.

I have to imagine that WDW for the moment likes this system. Having all guests go through the tap stiles before opening gives them a rough number of how many people seriously want to ride. The early morning start and having everyone get through the gates per-opening, creates a natural limitation on the number of available guests, maybe below daily ROTR ride capacity.

Since most people get a BG, I’m guessing that they know there are X number of people and allocate the number and size of the Boarding Groups so that they can try to accommodate as many of those people as possible. Guest Services doesn’t want to have a large mob of angry people there at the park at the start of the day who did everything “right” and still didn’t get at least a BBG.

I have not seen a lot of news reports or social media posts complaining about this. The polls seem to confirm it. If large numbers of people were getting rejected first thing in the morning there would be a major blow-up. Maybe I’m wrong in my thinking. It’s just this fool’s opinion. I haven’t tried yet personally but I’ll be there in April to see first hand.

This might be picking nits, but when it says “8:01” for normal group close, can we assume there is something close to a full minute, or are a lot of these something like 8:00:30?

Additionally, do we have any kind of idea how many are in a boarding group?

Ohh…it is definitely seconds. I was given a back up boarding group yesterday and it was only about 30 seconds in.

I think I’ve seen estimates of around 140 per BG.