Rise of the Resistance - Best attraction ever?

I think this is the best attraction I’ve ever seen. Ever! (I had ridden Flight of Passage first, and was pretty blown away by that. But RotR is far beyond that!)

From start to finish Rise is completely immersive, to the point you believe you’re no longer in Disney World, or maybe not even on Earth anymore.
The imagineers hit it out of the park with this one!
The technology involved is just as impressive as the detail of the theming.

As the kids say (or at least said somewhat recently), “this.”

Definitely everything in Disney’s bag of tricks, and then some. What I found most impressive is that there are some giant spaces within the ride. Most times there are tricks of perspective or sightlines that make a small space look large. In this case, the designers understood that sometimes there’s no substitute for a physically large space and used that particularly effectively in two scenes.

I kind of want to do a forum search for anyone who said “meh” and deliver a pie to the face.

I think it can be meh when it doesn’t run as it should. The loss of continuity ruins the story line and spoils the immersive experience. Should I duck?

I love that almost all elements are physical objects!
After being in so many attractions at Universal that “cheap out” by using so many screens, I love that Rise didn’t do that!!

With so many elements, I’m kinda not surprised at how often it goes down. You’d hope that as time goes on they’d get better at keeping it running.
But if that were true, Tower of Terror wouldn’t have broken down every day we were there this week!

You’d hope that as time goes on they’d get better at keeping it running.

I’m sure it has to do with the fact that the trackless ride vehicles interact with some large, mobile scenery elements, and the ride control systems are going to always be fail-safe in a scenario like that. Someone dropping a hat or parcel can likely trigger a 20-30 minute reset cycle.

I agree that RotR is the best attraction ever! It is really like 4-5 rides in one. It’s an adventure - an experience. Very ambitious. I agree it can be distracting if it breaks down or if all the elements aren’t working. Such is the territory with ambition.

Totally agree with this! When describing it I can’t really ever just say “it’s a ride and….” Using the word “ride” doesn’t feel adequate enough to describe what it is.

You guys, I am beyond excited to experience Rise with my Star Wars loving grand nephews in just one week! I agree, it’s the best ride I’ve ever experienced. My nephews (7 & 8) are going to lose their minds!

I’ll admit, while I think ROTR was amazing and immersive and brought ride experiences to a whole new level…I wouldn’t even come close to calling it the best attraction ever if we’re simply talking about re-rideability.

Yes, I’ve ridden it 3 times so far. I’m sure I’ll ride it again. But truth is, if you told me I had to only pick one or the other to ride on a trip, but not both, of Rise against several other attractions, I’d still end up picking some of those other attractions. Space Mountain, for example. People Mover. BTMRR. Maybe even Soarin’.

Why? Because, when all is said and done, ROTR is still another ride through a huge diorama (with a couple of stop off points). I mean, a fancy, technology advanced diorama…but a diorama, nonetheless.

I would still rank, for example, Hagrid’s as far superior to ROTR as an attraction. I could probably ride Hagrid’s all day, every day. ROTR…not so much.

Of course, I don’t mean to sound down about it. I loved Rise, don’t get me wrong. It was incredible. But…best attraction ever? Nope. It isn’t even for my wife and I a higher priority thing to do for our December 2022 trip. Will we end up riding it? Maybe. But if we don’t, no biggie. If I missed out riding on Space Mountain, however, THEN I’d be sad. And that’s a testament to Space Mountain’s longevity. As coasters go, frankly, it isn’t really anything special. But when you take that basic coaster design and couple it into the whole queue, “launch tunnel”, space station hill climb, and darkness…it makes me happy every single time! (Although, I’m also hoping that Disney guts Space Mountain and re-invents it in the coming years after Tron opens because I’d love to see it elevated to the next level using modern coaster design principles.)

Ryan, just saw this PM shirt at DLR and it reminded me of you. 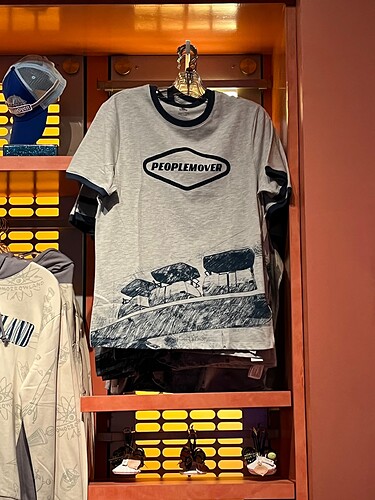 I agree with Ryan. Hagrid’s is far superior.
Part of it might be the walk-through part of the ride seemed more like part of the queue than part of the ride. A really awesome queue, but queue. It was a great ride and not meh, but not the best ever.

We did have a fun moment right after we were assigned a color (blue). The CM saw our First Visit buttons and commented that we couldn’t have been that effective as resistance since we were caught on our first trip. DH said something and it ended with “and here we are on the green line.” CM, “The what?!” DH casually, “The green line.” Several repeats.

That’s pretty cool. I wish they had a WDW version of it. Even though the People Mover shirt I already have is technically the Disneyland Peoplemover, it is less obvious. This one it stands out more. But the ink drawing look of it is really neat!

We did have a fun moment right after we were assigned a color (blue).

The CM at the part of the attraction saw me wearing this shirt. He stopped walking past me, to give it a long hard look/read. Then looked at me a said “I can’t say I don’t like that shirt.” You could tell he so badly wanted to say something First Order like, but he couldn’t! 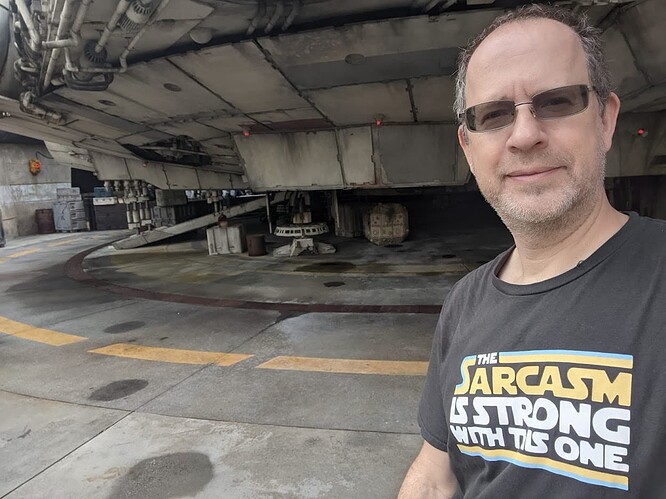 From start to finish Rise is completely immersive, to the point you believe you’re no longer in Disney World, or maybe not even on Earth anymore.

It never occured to me that this was what I enjoyed so much.

The thing with this ride is that I don’t have moment where my heart feels full - I do for FOP and Soarin, or a moment where I am like “OMG this is the coolest themeing ever” like I do for TOT or GOTG. But, from the second I walk into the Rey room I am immersed, I am there, and I am having a great time. And then leave and walk through Batu and you still feel like you are some place a little different. Especially at night. In a way it is just comfortable and fun. Which means one can underrate it (I don’t).

Why? Because, when all is said and done, ROTR is still another ride through a huge diorama

But, Disney is built on dark rides! A dark ride is not a roller coaster and therefore can’t be compared to one! ROTR is a dark ride in the tradition Mr. Toad, Peter Pan, and Haunted Mansion - at the end of the day - all ride throughs of diaromas!

It never occured to me that this was what I enjoyed so much.

I know that everything up to the “ride” is technically the “queue”, but to me it’s all part of the experience! It isn’t just a typical line/queue as on most other attractions. The Rey/BB8 room, the prison cell, all the CM interaction and the ship that “takes you to space” which all lead up to the ride itself isn’t just typical “queue” to me! That combined with an incredible ride experience makes this the best ride Disney has ever created, IMO.

Standing behind an awesome annomatronic of Admiral Ackbar while you get overtaken by the First Order is not a queue IMO. And why does nobody tell you to rush to the front for the best stand in the house?

I’ve only ridden Rise (and MMRR) once. Then, Rise had some elements missing I think (Covid), i hope, so I don’t know how it is fully operational. One thing DH and I both agreed on was Ride and MMRR felt the same but with different theming. Definately Rise is more immersive. Rise is great but it’s not my #1 attraction. I’m hoping my next ride is better. Will I pay for it… yes, at least some. Will I pay for it more than a couple times, no.

One thing DH and I both agreed on was Ride and MMRR felt the same but with different theming.

The first time I rode Rise, I legit teared up. Best immersive experience I’ve had in a ride at a theme park ever. Sorry Hagrid! Love your coaster but it’s not the same. I don’t feel like I’m “in the story”. FOP is a close second to Rise for me.