Rider Switch and Tips while FastPass Is Still Gone

Couple questions. Is Rider Switch still being offered even if FastPass isn’t? If so, is the second group still getting a shorter line when they go through?

We have a trip in early November, and I assumed by this point with the 50th in October that we would have already heard about FastPass coming back. Since that isn’t the case I’m starting to think it may not be back for our trip. Any tips people have on hitting their favorite rides under these circumstances? Does TouringPlans COVID itineraries account pretty well for this in your experience? Mostly worried about MK where there are just so many attractions to try and fit in even when planning FastPass well.

Ride switch is still available, and uses the Fastpass line (so shorter wait).

Fastpass may or may not return for your trip…and even if it does, may look completely different. I wouldn’t plan on it. But truth is, Fastpass doesn’t help you as much as you think it does because it causes your standby times to be longer. You are just exchanging a shorter wait for some rides for longer waits in others.

Also keep in mind that posted waits have been quite inflated.

We liked our three FPP because we could do headliners with shorter waits, then do shows, an ADR and things like TTA without long lines (those things usually didn’t have long lines.)

Sure. But the OP talked about so many attractions they wanted to do at MK, so that doesn’t coincide with your touring style.

We are here now and finding that evening waits aren’t too bad. So far we’ve just been to MK on 2 separate evenings (starting at 4-5 pm) except for one midday where we rode the Liberty Belle and explored TS island. We have done every ride at MK except Peter pan, Splash, JC, Under the Sea, and Astro Orbiter (don’t plan to do that one!). We haven’t seen Tiki room or Country Bears yet, either, but those don’t have long waits.

Very helpful information everyone! Thank you!

One more question on rider switch. Disney’s website indicates that the party who doesn’t ride initially must wait in a designated area? Is that true? I’ve heard of people getting food or doing other things while the first group waits in line and rides to maximize the time.

I’ve never seen that before. It has been a few years since we’ve actually had to use it, so unless something has changed, that wasn’t the case.

What WAS the case is that they wanted to see the entire party up front, and know who was riding versus waiting. But after that, the waiting party didn’t need to remain in the immediate area.

One recent change is that they no longer allow you to bring TWO additional guests with you for the switching rider. So, for example, if there are 2 parents, and 3 kids, and one child doesn’t want to ride, the first parent would take the two kids who want to ride with them…but when the second parent goes to ride, they can only take ONE of the kids, not both as you used to be able to do. (As such, it might be best to have one child ride with the first parent and the other child ride with the other parent.)

One recent change is that they no longer allow you to bring TWO additional guests with you for the switching rider.

Yes, this was the change made recently. It’s being reported today that they have since updated the RS policy again. The number of returning guests may be limited to 1 (the second adult) only.

The number of returning guests may be limited to 1 (the second adult) only.

The article I read on DFB just said, “The number of returning guests may be limited.” (period.) Which implies that it could vary by attraction (which makes sense to me). Hopefully they will let you take up a full row instead of leaving empty seats? 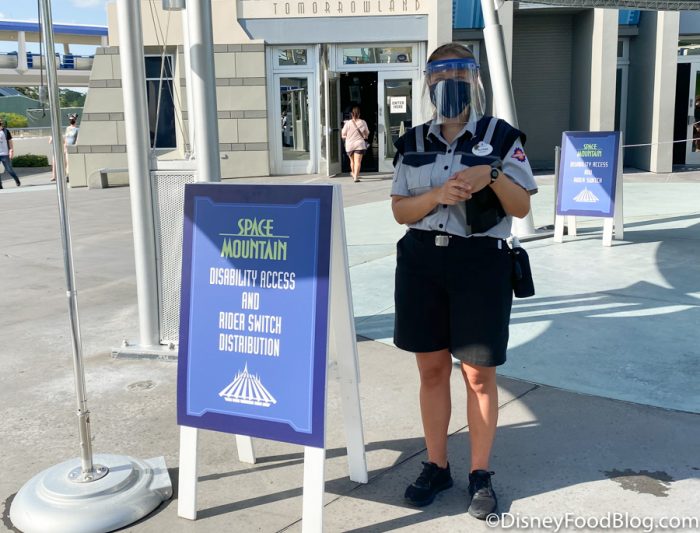 Disney World has changed some language regarding its rider switch policy. Check out the details here. 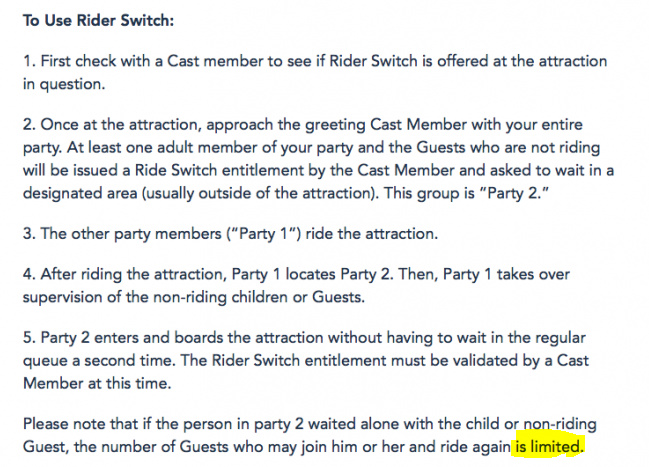 Can someone clarify for me point # 5 in the screenshot above “Party 2 enters and boards the attraction without having to wait in the regular queue a second time” Where, exactly, does Party 2 enter? I had family say that when in WDW in April they entered the queue at the first tap and waited in the regular queue from that point. I presumed they would use the FP line but that wasn’t the case. At any of the rides they used RS for.

I presumed they would use the FP line but that wasn’t the case.

When I used it in May/June, we were directed to enter at the FP queue. The entrance for the FP queue is adjacent to the standby queue, but it diverges. Maybe that’s why there was confusion?

That’s what I thought, but she was insistent that the second person had to wait in the regular line beginning at the tap.

If it was just one ride I would have chalked it up to the CM, but she said it was that way on every ride.

I can see why someone who isn’t familiar with the fastpass line might think they are just joining the regular queue in some cases. The FP line is designed to be obscured from other riders for most of the time to avoid envy. That’s the only explanation I can think of. 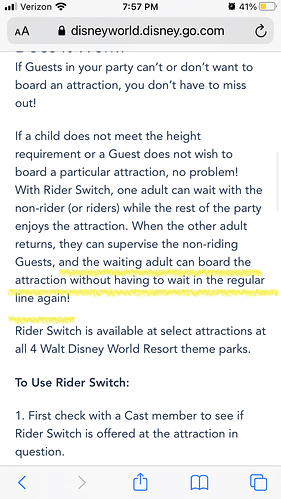 Yes, a numbers of blogs have reported today that it only the non rider riding. A couple have said it is in response, again, to people taking advantage of the system (were those private tours still doing it?)

The wording in other places seems to make people think CMs could increase the number if they wanted to. Who knows since Disney uses the blogs to send these messages out. It allows them to say “the blogs said that, not us”.