will not go on anything that goes more that 5mph!!

My question is has anybody used the rider swap option for a child (or adult) that is tall enough but doesn’t want to, recently within say the last 6 months?

I know disney website says that it isn’t just for babies and anyone that doesn’t want to ride can get a rider swap but have read lots of different posts saying cast members will refuse it, or won’t allow. Anyone had experiance of this lately? Also do all party members need a fast pass for the ride to get a rider swap? Read lots of conflicting posts about this too.

How can CMs get away with saying no, if website says yes?? Tia

The FastPass enforcement is inconsistent, with a lot of people saying they had no problem using child swap when only party 1 had FastPasses, but a few people have said they were told they all needed them. It will just depend on which CM you happen to get and there isn’t a formally stated policy anywhere that I could find. (This webpage being passed around previously did not specifically address the question, though it couldn’t hurt to present it). 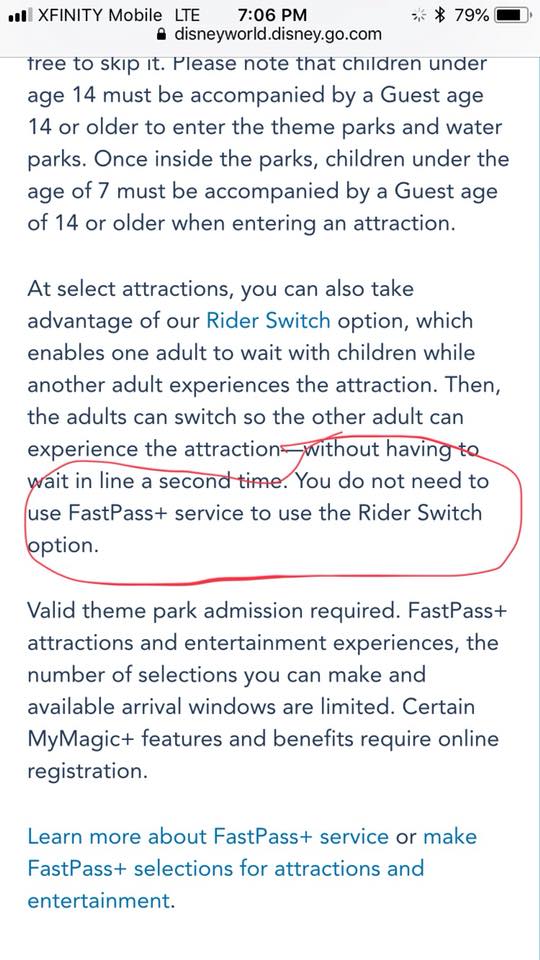 This policy is effectively stating you can use CS from the standby line as well.

I know you were looking for a recent report but on multiple trips between 2014-2016 I had a child tall enough to ride Space Mtn, Tower of Terror, and Rock n Roll coaster…on all 3 rides he had to stay in line with us and at loading dock one adult would stay with non-riding child, others would ride, when ride was over the parties would swap. So if child tall enough everyone waits in que and swap takes place and loading / unloading docks. The adult that waited was able to take two other kids back with him (so party of 3)

Thanks guys. Good to know.
Having her come in the que and wait at the loading dock is fine with me. She is genuinely scard to ride fast rides so this would work perfectly.
With that in mind, I take it we all need at FP for the ride if not doing stand by?

I have actually heard different reports than natguidry. I’ve heard that regardless of reason (too short or too scared), a child who doesn’t want to ride and needs supervision can wait outside and the supervisors can get CS passes. In fact, I think I read that someone’s elderly grandparent who couldn’t go through the queue nor wait alone also made them eligible for CS’s.