I would love some input on the plans I have so far. I’m hoping to finalize soon to be ready for booking fast passes… .but I admit every time I start looking I get tempted to change it all around. I have booked some ADR’s so I would most likely be giving some of those up if I make too many changes. We have 3 grandparents, DH, myself and 3 girls ages 11,9,7. Our travel dates are 11/24 - 12/2 we have 6 day non park hopper tickets.

The part that I am going in circles with is which 2 days to have at the Magic Kingdom. I would love to take advantage of the low crowd days but if we do that we would miss HEA. I had planned on 11/29 being our second MK day but if we go 12/1 instead we could do the dessert party but would be fighting crowds. The second part to that dilemma is if we are doing a mid’week free day then should i consider changing AK from Wed to Thursday so have Wed free but then potentially lose HDD. I’m embarrassed to admit how much time I spend thinking about this!

I don’t think I have much of an answer for you! Lol, but I’m in the same boat of confusion with our schedule! And spending too much time figuring things out! I wouldn’t give up your HDD reservation, that sounds like a fun thing to do at the end of a free day! Personally, I’m really excited to see HEA and experience the dessert party, mostly to manage crowds! I like MK at night and would miss being there. I know they say, with a good touring plan, crowd levels are less of a worry.

Thanks! I’m kicking myself that I didn’t get HDD for Wednesday as it would probably be a better option for a free day than Thursday. But I am driving myself crazy with all the possibilities

There is no shame in the amount of time you’ve been thinking about this. We’re going the same week you are and I just now got my ADRs in order despite thinking I knew my plan at 180+. Even still, my AK ADR may get thrown out the window if a FOP FP+ is available at the same time.

You can always put HDD in Reservation finder for 11/28, though I imagine it would be tough for 8.

As far as what you should do, there is no right or wrong answer, so good luck.

I don’t have any specific input re your days/adrs/events. But I can say wholeheartedly that I believe in the amazing usefulness of the personal touring plans.

By that I mean, I’ve never had to pay any attention at all to CLs. I know that may sound weird and odd to those who haven’t used the TPs, but it’s worked amazingly for us.

A combination of a good TP, using as many EMHs as you can, making RD (well ahead of time), taking aftn breaks (when crowds highest/lines longest): that for us has made it unnecessary to care about CLs.

We were there on 8/9 CL days one August trip, never waited in a line longer than about 11 minutes. I told some CMs about it, they even couldn’t believe it that week.

So, I plan wk around EMHs day, w MK 1st or second day usually. Then I know what park what day (we don’t hop). Then I know where we’ll be, to figure out which adr would make sense.

We going all out w a signature adr this trip (1st sig ever while traveling with the littles). Tiffins on our 1st park day, which will be AK this year.

We actually eat breakfast & most lunches in room, to save $. Need to save somewhere, since we’re spoiled & like to stay deluxe as in @Dolphin. Also we’re saving this year by doing CS dinners on some nights.

I love HEA. They were ones of my favorite thing to do. I think it is worth going to watch them one night. Also, even if it is a busy day, the park starts emptying after the fireworks, so it’s actually a great moment for touring. Maybe instead of having an empty day, you could have a late MK day, starting 4-5pm? Also, even if the schedule says the park closes at 8pm right now, it will probably be opened later. I would recommend looking at last year calendar opening times.

using as many EMHs as you can

Do you do this and then park hop? Or stay in the park? We are not getting park hoppers for upcoming spring break trip, so I was planning on not doing EMH.

@Kkerr76- How is that adorable cat of your’s? I so love that photo haha!

We haven’t done PHs in years. Traveled w friend about 8 yrs ago, who didnt have them, so couldn’t use mine (from “forever” tickets I’d had).

I was surprised I didn’t miss the PHs at all. 9 of us this trip, so saves us a bit of money.

There’s a belief I hear from time to time that if you’re doing EMHs, you need to go to different park that night (so need PHs). I’ve never found this to be true.

The crowds in any park drop considerably around dinner time, and never reach the peak of afternoon hours. So we win by doing EMH morning, back to same park that night.

The advantage to line lengths by doing EMHs is great. But that also means we need to be @EMH RD before actual RD time, say 7:45 @tapstiles for MK, earlier than that for AK and HS with the new rides, now.

How is that adorable cat of your’s? 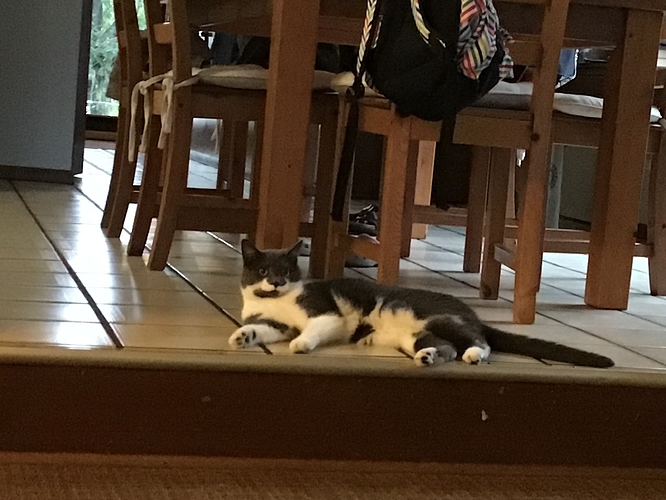 So cute. She looks like she rules the roost haha!

I agree. I definitely think you should pick one late day for MK to see HEA. Then you can still do a low crowd day on a party day for the second MK day. Also, with only seven days, I wouldn’t necessarily do a whole free day. Maybe just a sleep late morning or something? That way you could revisit your favorite park at the end of the week.

Thanks! Right now we have 6 days on our tickets. My initial thought was to add another day once we get there but the idea of having a day away from the parks might be nice too. We’re hoping to do a resort tour of the Christmas decorations at some point.

Thank you!! I feel a little crazy for how often Disney is on my mind these days! Definitely need to accept that there is no right or wrong and we’re not going to be able to do it all

Thanks! I will check the schedule for MK as it gets closer. I think it says closing at 9 it would be great to be able to stay after the fireworks and tour the park!!