RD BTMMR/SplM - which path to take

From my understanding the extra EMH in September in MK, only Fantasy and Tomorrow lands will be opening. We plan on RD-ing BTBMMR and SplaM. Where should we line up in the hub? What path to take?

I am thinking taking the yellow line path. Thoughts? 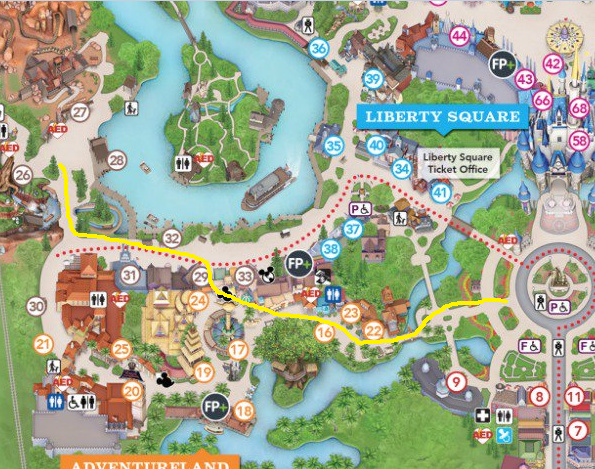 I would go yellow as well

People start lining up outside the lands on both routes during EMH. If you are enjoying EMH and the path to the left of the castle is open (under co truction for widening) then you can position yourself towards the front of the line outside sleepy hallow. The people not experiencing EMH will line up at the yellow so that tends to be a little more crowded. Once they open the lands it is a slow “mosey” behind cast members that with lead you in the direction they want you to go and blocking off other paths. If you are looking to do BTMR or Splash then the red path will get you there a little sooner. Only because they merge the two paths to make one slow stroll to the queues and the red path tends to have the advantage. My husband and I were the first 2 people on splash mountain going this route. No one can run or even walk fast so positioning yourself to the the front of the group is key. The shortest path is not always the fastest

Aside: So do CMs block that cross over from Adventure/FrontierLands?

If you are with the regular crowds (off site non emh) they hold you at the bridges before you even get to the entrance of the lands. Once the show at the castle is over they start moving ahead towards the lands.

I meant the crossover at aloha isle/alladin/restrooms (i forget exact location), not the hub area

Ooooh gotcha…yes it is open but cast members will lead you through that breezeway and then merge with the group on the other side. So on your map the yellow would merge with the red and then move forward toward splash and BTMR. You are walking behind cast members no matter where you go. They are very good at preventing stampedes lol

I know the railroad is closed right now. But when it is open we prefer to ride from main street to frontier land just as fast and none of the hassle of the crowds. The train always arrives just as the rope droppers arrive.

We had an odd experience in June. We took the red path and they held us twice, the last time being near Country Bear Jamboree. They held us there until 5 minutes after park opening at which time we could see people walking in front of the Splash Mountain bridge who I assume walked via the yellow path but kept going straight rather than cut through the breezeway. In the end it didn’t matter, more people were headed to BTMR and we walked right on Splash, but for those few minutes it was frustrating to have the cast member hold us after park opening.

I can’t comment on current construction issues, but I agree that the yellow path would be the most direct.

So my time to go is soon approaching. Re-visiting this topic. I am still un-sure. I keep flip flopping. I tried finding some youtube vids on this, but nothing good.

anybody recently do this? RD from hub to BTMMR or SplM? thoughts?