We’re planning to do morning EMH at MK on a 9/10 day. It’s our only option. I have FPs for SDMT, Space, and Peter Pan starting at 11:00 so the plan is to hit up some of the smaller Fantasyland stuff during EMH.
What do I need to know logistically to RD Adventureland at 9ish to get on JC and POTC before our first FP window?

Let me start by saying this is IMHO the best way to RD MK. The park has an unbalanced number of popular attractions on the right side of MK. By going to Adventure land you will avoid about 75% of the people in the park at RD.

All that said – Go to JC first. The ride takes longer to load and the queue is all outdoors which can be miserable later in the day. You’ll have no wait. Then go to PotC. Your wait should be 15 minutes or less. I bet you will be done with all of this by 10am – no later than 10:30am.

I would go left at RD during EMH. The small rides in Fantasyland have fairly short waits mid-morning. And the RD crowds literally go right! We were one of the few groups that went left at RD last month.

I think you can quickly knock out JC, PotC, and even HM before getting to Fantasyland. Those 3 lines can be very long later. I think you will get to Fantasyland within an hour of RD if you only did those 3 rides. You didn’t mention Frontierland but you could probably knock off both mountains around 11 AM.

We snacked at Gaston’s and shopped before riding Barnstormer, Dumbo, and Buzz. We were off Buzz by 10:50 and waiting for our 11:10 Space (FPP).

Thanks! Do you think we should head for Adventureland from Fantasyland behind the castle/through Liberty Square or across the hub?

I’ve never done EMH or RD at MK - we always do PPO ADRs and head to wherever big attraction we don’t have a FP for so I’m not even sure what to expect.

Go around the Liberty Square side to avoid the off-site RD crowds. A lot of ppl don’t know that there is a tunnel that connects the beginning of Fronterland, near the Country Bear Jamboree, to Adventureland. It saves a lot of time walking all the way around. I have marked the best path here: 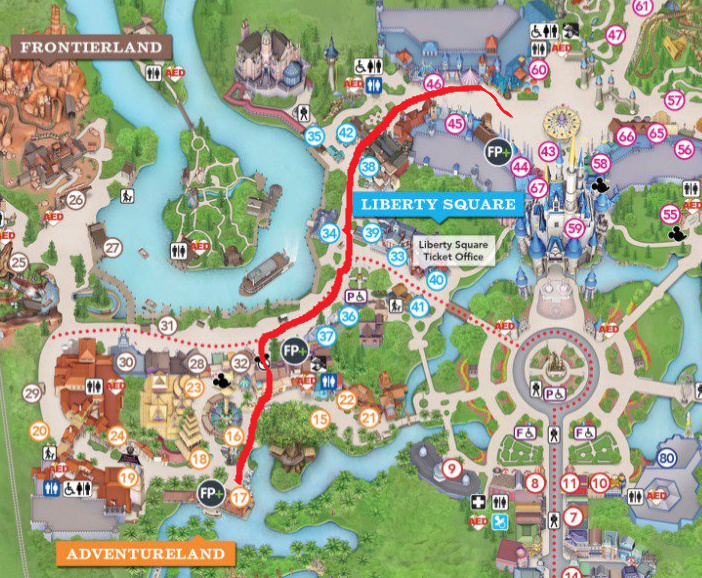 Thanks! Adventureland and Frontierland won’t be open during EMH so that’s where Fantasyland is coming into play. I was hoping if we go to JC and PoTC (and maybe HM - my fav ride in any park) in the first hour after regular opening we could hit BTMR or Splash or both before our FPs kick in at 11:30.

Your experience last month sounds like my April trip but at night - we did HM, Splash, BTMR, and SM x3 during and right after the fireworks. I also devoured a Nutella waffle in there at some point to stay upright.

Adventureland and Frontierland won’t be open during EMH