I am planning a trip in '22. We live in MA and usually go during our April break (tied to Patriot’s Day). However, in '22 the week coincides with the week after Easter.

I’ve always read (on the various forums) that ‘the week before and after Easter are awful - some of the worst crowds in the year’. However, the TP prediction has the week after Easter as not so bad (in the 5’s). Wondering if there’s an anomaly in the prediction, or perhaps the general recommendations aren’t quite right.

We are trying to decide between President’s Week in February (Feb 20-26), or the week after Easter (April17-23)

That number will go up. I will always go President’s week if April is Easter week.

I think you mean April 17-23, not March. That makes a big difference in terms of school spring breaks.

I did mean April, not March. Thanks for catching - corrected in original post.

Thanks for the quick fix! Those March dates are usually around the time of our spring breaks in Iowa.

I agree with @PrincipalTinker that I would choose President’s week over Easter week. Our family has gone towards the end of President’s week during Princess Marathon and into the next week. Crowd levels were 7 & 8 with a few 6. We have always been able to accomplish everything we wanted.

Welcome to the Forum!!

If you are on Facebook and are interested I am admin of the February Facebook group for liners. You can take a look at previous trips or info.

I’ve always heard that the week after Easter is a good time if it’s late in April and most of the spring breaks are finished. I think that means the week of April 24th in 2022, but I bet things would calm down a bit around the 21st. It doesn’t mean the days directly following Easter Sunday.

I too am in MA and as a school district employee, April vacation has always been my preferred Disney week.

I will never, ever go to Disney that week again. @nuclearali, you mention the 21st and that is my birthday! I love celebrating my birthday in the world- but I will never go again during NE break/Easter combo again. I found myself one day in MK sheltering my teenage son from a crowd that decided the area near Crystal Palace was a one way. Mu son was pinned against a fence and I blocked the crowd with my body. My son is now 29 and he will never return during that combo week. I was bruised and bleeding- but my son was safe.

I am sure others love that week and will tell you it is not that bad.

Our Catholic schools’ spring break is always the week after Easter, no matter how late that ends up being. We went to WDW during that week this year and it was fine. More crowded than an off time of course but with a plan and early rope dropping we did all we wanted to. Granted this entire year is an anomaly. I was actually there Presidents Day weekend also and I’d say the two were comparable.

Was it early April this year? Not NE school vacation week?

Yes, this year it was April 4-11 that we were there. Next year break will be the week of April 18.

What’s throwing me off a bit is when I look at the historical data from this site it backs up that in 2022 it would be low-ish (shows 2022 as a 4.6 for week after Easter, while it shows President’s week as 8.2).

So on one hand I see that data, but on the other I hear the horror stories but not sure how many of those were on late Easters.

Love to see others diving into historical wait times and comparing holiday dates from year to year, I do it too!

Trust the data. That’s what TP does when they predict CL’s.

Mu son was pinned against a fence and I blocked the crowd with my body. My son is now 29 and he will never return during that combo week. I was bruised and bleeding- but my son was safe.

OMG was this really WDW?! That is awful.

So on one hand I see that data, but on the other I hear the horror stories but not sure how many of those were on late Easters.

My horror story is only from MA school vacation week. April vacation week with at least a two week buffer (especially without a race) has been very manageable. 2017,2019, 2020 we went in February.

It was a nightmare and it is why I feel so strongly about this.

I will admit I might have stopped looking at those numbers after that week. When IaAW has a stand by line over an hour by 9am you know the numbers are wrong.

With a great plan it might be ok but I would caution liners to watch the crowds. I thought it would be a 5 and I was unprepared. How many people do you know purposely plan President’s Week?

I was supppsed to go That week 2020. Same as you when booked was low…. As we got closer numbers did increase.

I was told further away you get from Easter the better it will get. Our numbers turned out to be a lot of 7s before we had to cancel.

To look at some of Disney’s data: gold annual passes are blocked out 2Xs a year- in December and these dates in April 2022 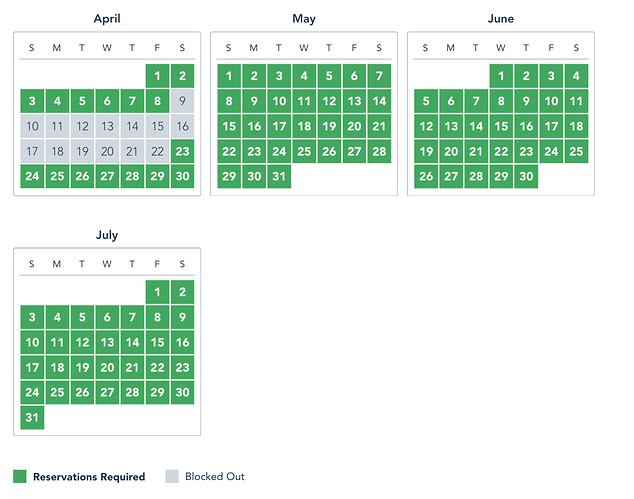 So you find February ‘busy but manageable?’. I get scared when I look at the projections and it shows 9’s for the first half of that week. Busiest I’ve been there is probably about a 6’ish. Regardless of which week we go, it will likely be something like Sunday to Saturday.

President’s week is very busy. I have been very lucky and the weather has been great for my trips. The problem is usually there has been FPs that would help.

Are you flying? Maybe that could be a deciding factor? The cost of airfare?