I was going to stay at the Poly, but when the Sun & Fun (Fun & Sun? - whichever) rates came out, I could cut my cost in half by changing to AKL Standard (I have my fax all set up requesting a partial savannah view for my birthday stay) - and I love AKL, so it’s a win!

Next Saturday is my ADR day, so I’ve started working on my preliminary plan…

7/18…
Flight is scheduled in around 9:30, and I’ll DME to AKL to drop off luggage (in room if ready, otherwise with Bell Services), then to Epcot for the afternoon and evening (and probably my last viewing of Illuminations).
ADR thinking - Le Cellier around mid-afternoon

7/19…
Magic Kingdom
ADR thinking… Breakfast at 'Ohana, Crystal Palace, 1900 Park Fare, or Chef Mickey’s
Early evening (since I am NOT a fan of Happily Ever After), head over to Disney Springs and ADR at Boathouse or Raglan Road (I’ve also pondered going back to AKL and doing Sanaa or Jiko with Sanaa getting the slight edge because a) price point and b) menu is less weird stuff (no boar or elk). I’m not picky per se, but boar and elk do not make me excited.)

7/20…BIRTHDAY!
Animal Kingdom
ADR thinking…Tusker House breakfast…though I’m also pondering just doing breakfast at The Mara and lunch at Satu’li.
The Rhino tour!!
ROL Dessert Party (because it is awesome for Gluten-Free!!) - I know from experience I can skip dinner for this one.

7/21…Depart for Port Canaveral probably around 11ish.
ADR - Boma, as early as I can get it so as not to interfere with DCL transportation. (Because it’s similar to Tusker House, I’m leaning towards skipping that - that being TH)

I might switch MK and AK around…but I figure I’ll have the better shot at FOP FP+ for the 20th since it’s my latest day. That would have the advantage of not having me in the EMH park since while I may well be up in time, I don’t necessarily want to be stressing about getting there for EMH. And of course if a DAH is announced for MK or AK (I don’t think they do them at Epcot), that will throw a change in there also.

But for now, this is loosely what I’m thinking.

Note: I’m gluten-free, so I’ve purposely chosen places that I have either had experience with or have heard great things about them and gluten-free.

You have such great plans! How will you decide? Sanaa or Jiko (wow- didn’t you have this choice before? ) did you go to Sanaa a couple of trips ago (am I asking that and Inferring that Sanaa every trip is not a good idea? Nope! That would be a perfect plan!) I must say when I read the Mara, Satu’li combo my first thought was “ that is pefect combo”.

I will take the bait though- wild boar is pork but the combo of flavors in that Jiko appetizer are surprising and rare.

I am so jealous of your plans!

I’ve debated Jiko or Sanaa before…but have been to neither.

I know I need to make it to Tiffins one day…but that would just be too much food with the dessert party. I had POFQ breakfast, Satu’li, and Restaurantosaurus in September and was so stuffed for the dessert party - that’s why I’m thinking just breakfast and kind of a later lunch.

Also, I have you to thank for my requested room area. Your pics from your standard room were awesome!

I went to Sanaa in October and it was very good! I am going to Tiffins next month as part of the FoLK tier 1 package! If it is available will you still consider that this trip or another?

Definitely would! I’m going back the last weekend in September (once again, Rosh Hashanah falls on a Monday and Tuesday, so…yay!). Staying at Pop for that trip.

It has actually shown as available off and on for 2/16…if it wasn’t for Illuminations being in its last year, I’d do it in a heartbeat.

I have to say that Sanaa GF bread service was the bomb!!! Very tasty and didn’t remind me of cardboard. I couldn’t stop eating it, even though it’s certainly not keto. 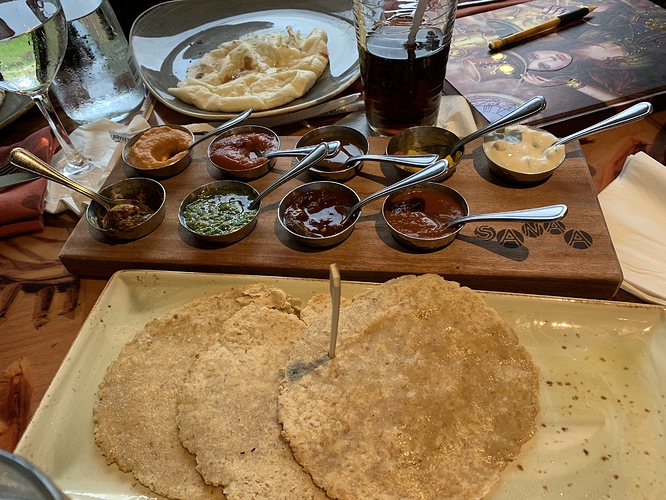 Yum. Not worried about “keto” - I am gluten-free due to a wheat allergy.

I eat GF because it causes me major issues. I eat keto because I am diabetic. Not too fond of GF bread, so when I find something that tastes good, I will eat it. The fact that I kept eating the bread service is a testament to how GOOD it is. (As in I shouldn’t have been eating all those carbs, but did anyway).

Aren’t you going next month? Where are you eating in February? If so this info would help with your July trip.

One day. Right now it is Garden Grill lunch with the Disney on Broadway Concert Series Dining Package and then Landscape of Flavors for breakfast the next day.

It may become just quick service at Epcot though as I’m really not excited about Garden Grill lunch (peppers and onions are nasty IMHO).

I can only eat them if they are cooked very well done. I’m looking forward for your decision, it will help with my next trip. I’m hoping for a 50th BD trip before our 25th silver trip.

I just found out we can go this summer and I booked GG but I don’t see anywhere that they serve peppers and onions. Where did you see that?

The allergy-friendly menu on here.

Ok that is why I did not see it. Thank you

Apparently it is no longer offered per multiple people on multiple sites.

I’ve decided in February to forego the package and break in my TIW card at Le Cellier!

Which means I’ll probably do something different in July. Perhaps La Hacienda if I can find allergy reports on it. Or maybe head over to Boardwalk and go to Trattoria for “linner” (my term for late lunch/early dinner).

Are you sure you wouldn’t prefer to call it “dunch”?

It would be more like “sunch” or “lupper” since I usually say “supper” to be honest. Haha!