So when we booked our flights, we decided (really for the first time) to avoid SW because they had become somewhat of a shitshow. So what did we do? We decided to go with JetBlue. They have a ton of flights out of Boston, and I’d flown them a couple of times for work and had always been happy with them.

So what happens? Starting last weekend, JetBlue has been cancelling flights left and right out of Boston. 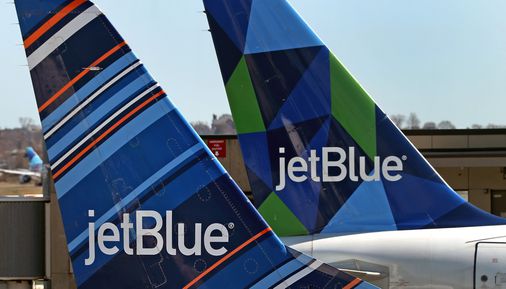 After another bad weekend, what is happening to JetBlue? - The Boston Globe

The biggest carrier at Logan Airport is facing delays and operational challenges after decades as one of the airline industry’s shining success stories.

I’m so excited for this trip that has seemed so far out of reach since the pandemic began, but now have this new anxiety hanging over my head. I don’t want this trip derailed, but I don’t know what else I can do at this point. 8 days, we gotta get to Florida. They can cancel the damn return flight for all I care, we just need to get down there. Please send happy thoughts as this is killing me at the moment.

They did say they would try to cancel ahead of time but I know that won’t help much during school vacation week. We will all wish pixie dust for you!

Yup, flying is a crapshoot right now! Can you fly in a day before you are scheduled? We were delayed 8 hours on the way home and I was so grateful it was not on the way there; flew SW. All my best wishes for it to go well!!!

Do you think it would help to have a backup plan? Like, know what other flights are going out that same night so you know how to pivot, if necessary? Or would driving be an option and if so get a sense of the logistics involved? (hmm I just googled Boston to Orlando and that seems to be a 20 hour drive, backup flights is probably a better option)

They aren’t required to do this, but if your flight is cancelled, politely ask them to book you on another airline. (I have had this happen before, but it was also with an airline I had pretty high status on.)

Another option would be if they cancel your flight, book yourself on another airline immediately and ask for a refund of your money. You are entitled to a refund if your flight is cancelled.
Flight Delays & Cancellations | US Department of Transportation

It seems that nearly all airlines are struggling but SW and JB seem to be having the hardest time for whatever reason. I’m very nervous about our flights down (I don’t care quite as much about the flights home LOL). I even said to DH this weekend: we have to decide what our threshold is for deciding to just get in the car and go, whether that means driving to some other city where we can get a flight or driving all the way down. He looked at me like I was nuts. I think driving is off the table for us - but then that means leaving a LOT of money on the table, so…

More like 24 even with minimal stops. it’s not an appealing option at all. To date every time I’ve thought - let’s save $$ by driving! - I think of that return drive home and plunk down my money with the airlines.

For February I booked a backup one way rental through Costco.

We would just take our own car

I did it so that I could fly back. It was an “emergency back-up plan”.

My limit for driving is about 7 hours. For us to drive from KY to Disney with stops is about 14 hours. Did it one time on our first trip to Disney and never again. We even broke it in to two day both ways. Our closest airport is in Louisville and is only about 40 minutes from my house. When time is money, it’s worth every penny to fly. We have driven to Indianapolis, Indiana and Nashville, Tennessee when flights have been substantially cheaper than Louisville. Both of those airports are about a 2 1/2 hour drive. I’ve always flown Southwest exclusively and never even had a delay until 2018. Now it seems like just about every flight has a slight delay even when we take the first flight out in the morning. Funny thing is, the October 2020 flight and Disney trip we took was perfectly on time. LOL!

The best advice is have a back up plan, know what other flights are leaving for MCO that day, and have the app loaded to rebook immediately if you get a significant delay or cancellation. I’ve seen lots of people talking about the hours they’ve spent on the phone trying to talk to someone at Southwest. I’m not sure why they don’t just open the app and rebook themselves. That’s always been an option in the app.

Flightaware.com is also a good site to track where you plane is and anticipated delays.

Flightaware.com is also a good site to track where you plane is and anticipated delays

I always have an open tab for FlightAware. I’m such a nerd and it is sooo interesting to me. Plus it’s fun to see where the planes overhead are going to or coming from.

Oh! I guess that would negate the flying back thing.

When I was 10, my parents decided that we could swing another Disney trip if we avoided flying and drove down. We were living in Rhode Island, woke up at 2:00 a.m., and my dad drove us about 17 hours to Savannah Georgia where we found a hotel for the night. Woke up the next morning, had breakfast at the hotel, and drove the remaining 6 hours to CBR. Remembering that trip, there is no way that I could drive that today! My dad was a saint.

We drove from NJ to WDW ONCE in 2019… and by the time we got to Orlando, both DH and I vowed never again. And that was WITH an overnight stop each way.
I stopped flying SW with all the nonsense thats been going on since Covid. I will not do Frontier or Spirit. (This is more about the limited number of flights in and out of my airport, not that they are unsafe or anything. If my flight gets cancelled, i could be out of luck for days before theres another flight.)
That pretty much leaves me with American. Who has been pretty good to me so far. But even so, i’m watching my flights with anxiety.
I’m flying AA into Boston on Easter Sunday with my middle kiddo, for an impromptu “Senior Trip” to Salem. Leaving DH with youngest DS, so cancellations could be a big problem.

Back in 2011 we (4 of us, kids were 5 and 9yo) took a “big” vacation where we did a 5 day DCL cruise (double dip) and 5 days at WDW. We were celebrating our 10th anniversary (2 weeks shy of our 11th) and splurged to stay at the Wilderness Lodge for the first time.

At first we thought we would have to drive down due to too much luggage and $$ options to get back and forth to Cape Canaveral. Dh had suggested we drive down many times and I always talked him out of it. It was looking like the best option until we ended up booking Amtrak’s Auto Train instead (less expensive than flying!) and loved our experience on the way down.

The cruise was amazing and we were enjoying the last few days of our WDW stay when I received a call on Thursday afternoon while in line for Peter Pan that our Saturday return on the Auto Train was cancelled. Apparently Hurricane Irene had other plans for us and decided to hit the east coast. Amtrak shared that there wasn’t any availablitly to rebook for at least a week.

We ended up cancelling everything on Friday (WDW was great), scrapped the plan to stay with the ILs on our last night, and started driving north. The ride home wasn’t eventful, but since the entire 95 corridor was being evacuated we had to avoid it and take the inland route home. We stayed over somewhere north of Atlanta and slogged the rest of the way home on Saturday. We were able to avoid almost all of the storm until we headed east on the PA Turnpike for the last two hours of the trip. Trees across most of the road, and pretty severe weather until we arrived home.

All in all, we were safe, we had our van to drive home in, and the kids did fine. Dh is thankfully convinced that driving home from FL is not a fun experience and he will never do that trip again.

…and I say that we will never drive to/from Florida again even though we routinely (like 7 or 8 times this year) drive to Cincinatti/Dayton, OH and Indianapolis, IN…about 9 to 11 hours depending on the trip. I think our limit is one day of driving.

I hope everyone’s airlines behave and your flights all work out as intended!

The drive to and from Florida is extra awful for some reason… We’ve driven cross country twice when we moved to Arizona and then back 3 years later. Although it wasn’t “fun” by any stretch, it wasn’t nearly as bad as that drive to Florida. I don’t know what it is.

For us, driving has always been the norm. From Southeast Michigan, it is about a 16 hour drive, plus stops. We split it across two days, and always go further on the first day so the second day doesn’t seem horrendous.

This has always saved us a lot of money, despite the cost of gas and hotel on the way there and back.

When it was just my wife and I for December 2020, we flew. First time since 1995. It was nice, for sure, and it was “break even” at the time versus driving. But NOW, with costs of flights almost doubling, plus also having to pay for transportation to/from the airports, etc, even for just the two of us, it would be almost DOUBLE the price to fly versus drive.

In January 2024, we are planning a 4-night cruise then 4-night stay at Disney. Originally, we figured we would fly. But unless prices drop between now and then, it would cost us about $600 extra to fly versus drive…so, we’ll probably end up driving.

Now, I was kind of hoping that through work travel, I might earn enough Delta SkyMiles to make flying cheaper for pleasure…but Delta just dropped Economy from earning any SkyMiles…so my travel for work no longer earns me anything.