HI! Can anyone help on this one? 64days until our first WDW (have been to DLP before which will pale in comparison!) so working on a packing list. How well equipped are the rooms at PORS with power outlets? Wondering if bringing a power strip would be advisable. Will be travelling with DH and DDs (6&8yrs) - thanks!

How many outlets will you need to be using at once, for chargers etc?

It’ll probably the usual stuff - 2x smartphones, an iPad or 2, camcorder & probably a spare power pack for the phone in park - so a few bit! Remember when the most tech you ever took to a theme park was a camera which used film & normal batteries?!

I just looked at the room photos on this site. I saw a couple sets of wall outlets that were out in the open, plus the bathroom one. But I think you probably are wise to bring a power strip.

This is from memory 2 years ago, but I have to carry a lot of electronics for work: I used open outlets near table, fridge and one under closet clothes area I believe. Also the one near the hair dryer, of course.

I always bring a power strip, comes in handy, if only because it moves the plugs out to a place where you reach them more easily.
I also bring strips of velcro to keep the wires manageable, but I’m an IT and facilities geek and always have 50ft rolls of the stuff in my pack.

If you have a lot of devices that charge via USB, you might want to simplify using something like this USB charging station: 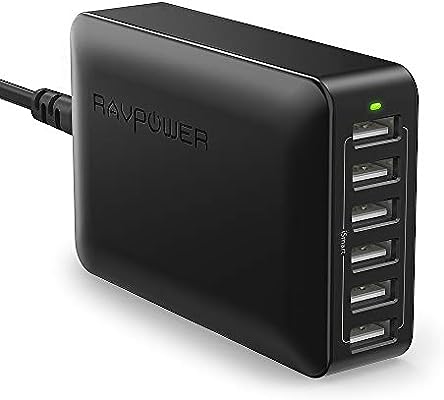 Normally don’t travel with a power strip - it forces us to unplug. However on trips abroad - do take a similar USB devise as above. If you are going to take something - take something like that so that everything is nice and neat and in one place.

We usually travel with 2 smart phones, 2 iPads, 3-4 portable charges. I have never brought a power strip with me (funny I always bring one to DC). The only rooms that I struggle with to find enough outlets have been AKL, but I just unplu one of the many lights!

There aren’t many spare outlets across at POFQ, and if you are used to sockets you could hang a walrus off (like we have in the UK); you’ll find a small extension cable will reduce frustration.

Was there at beginning of month. One by the bed, one that the coffee pot plugs into and one by the sink.

Thanks all! Great to hear other people’s experiences. It’s certainly been a huge help