Post-Trip Report - Crowds are Back

We got back from WDW last night after a pretty good week away. The parks were absolutely rammed, which really impacted our trip - especially at Studios. I would have killed to have Genie+ and Lightning Lanes open while we were there. The weather was very hot for October. BW Villas was good, but the current state of housekeeping in Deluxe resorts is terrible.

We arrived Saturday 10/9 with a bit of a delay due to the SWA issues and had a fantastic dinner at Yachtsman that night. Sunday was an Epcot day and we arrived about 20 minutes before the Early Access. There was an issue with the touchpoints, but we got in on time - it did show that if something goes wrong, that half hour is so tight that it could end up being a worthless perk. We hit Frozen first and got a boarding group for the rat ride - we still had to wait about 35 minutes after arriving, which wasn’t great with the queue mostly outdoors. The ride was the same as at DLP. Great meals at Teppan Edo and Space 220.

Monday was a bit of a disaster at Studios. I made the mistake of listening to the kids and rope dropping MMRR, which we were on an off in a few minutes. We then headed to RotR and waited two hours snaking all over backstage. Of course, the ride broke right after the stormtrooper room - we ended up getting Lightning Lane return for later, but it killed the whole morning. Had a great lunch at HBD and afternoon drinks in the Cantina. I think we probably only made it to 4 or 5 rides with the crowds. Miserable, hot day. I’m seriously thinking of just skipping Studios next year.

Tuesday was a great morning at MK, followed by Boo Bash, which was worth every penny for walk-on lines at just about every attraction. We watched the Fireworks and then did JC, Pirates, BTM, SM, HM, SM, Buzz, and People Mover. Also saw a few of the cavalcades and trick or treated. Fantastic. One thing - DO NOT EVER EAT AT CHEF MICKEY. Awful experience. Cold, bad food. Bad character interactions. Very expensive for what you get.

Wednesday was probably my favorite day - Just food and wine with a couple rides and dinner at Chefs de France. Perfect. Thursday was AK morning with FoP and EE and a fantastic lunch at Tiffins, which is still my favorite restaurant in WDW.

Friday was a long, hot crowded day in MK. We still got just about everything done that we wanted and had great meals at Crystal Palace and CRT, but it was a struggle. Closed out the trip with a great breakfast at Topolino’s.

My experience as well. HS is definitely my least favorite park by a Longshot.

Closed out the trip with a great breakfast at Topolino’s

Excellent way to end the trip! One of my favorite meals on property.

The sad thing is that Studios has so many of our favorite rides. It’s just such a hassle and not fun. All of our other days were much more enjoyable.

Thanks for this info. When we went a few years ago we skipped HS. We’re going in December and plan to go for the first time. Hopefully genie+ will be working!

This is reassuring. I’ve booked a lunch there for next week, but wasn’t sure if I’d made a mistake.

Even with rider swap, waiting 2 hours for RotR, and half-hour waits for almost everything else, we were still able to ride everything except RNRC in one day at HS last week. But I hope it will be easier with Genie+! Personally it will never be skippable for me. So many must-do rides there.

Glad you had a fun trip overall! Looks like there were some great memories made.

It was our best meal on 3 of our last 4 trips, and I regret not going on one of our trips last year.

You guys were there the week before us, right? I think a lot of people had the same idea we had, using the three day weekend to take the kids out of school for fewer days. All of our days were very crowded.

The week of Columbus Day has been terrible for a number of years now.

Yeah our HS day was Friday the 8th. It was already quite busy by then. I think the thing that saved us was rope dropping SDD since that is the longest line after RotR.

I think most of the 3 day weekends are like this - the days before and after (as well as the weekend itself) being very busy as people try to do trips while reducing the days of school their kids miss.

Here’s how the posted wait times varied over the past few weeks. I highlighted my day. The 11th-12th were the worst. 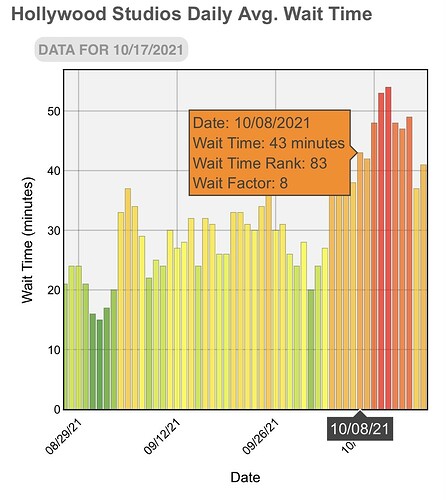 Yes, but the combination of the lower crowds right after the 50th and Touring Plans lowering the crowd numbers to ones all week gave us some hope.

Great info to show what we were hit with.

For what it’s worth, Disney’s posted wait times were dead on last week, except for one Pirates ride that was listed at 45 minutes where we waited only 9.

SDD was the only ride we did not get to that we wanted. I also think if it was 80 degrees instead of 90, it all would have been far more tolerable. I still cannot believe there was no plan to provide better shade in TSL and GE.

I watched an interview where they discussed this. They know they will have to do something about shade due to the rising temperatures. Otherwise ppl will stop coming.

My experience as well. HS is definitely my least favorite park by a Longshot.

We did Disney in AUGUST of 2019 and the only place the heat felt unbearable was HS, with TSL being just too much. Advice to hold off going there until the afternoon was perfect for the waits, but the waits were still too long to stand on the surface of the sun.

I still cannot believe there was no plan to provide better shade in TSL and GE.

It’s really a ridiculous oversite. More shade, more fans, would all be great in TSL. I haven’t been to GE yet, but I’m guessing it’s similar - at least there are places to duck into out of the heat there, right? TSL I hid in the AC bathroom for a while to cool down.

Appreciate the report. I’m wondering how much the genie announcement changed things for that week. Obviously a holiday weekend either way, but locals who want to visit before genie+ is a thing? Do RoTR while it’s stand by only? Feels like that has to factor in.

That definitely has felt like a thing this weekend. I’ve actually overheard people saying it “I wanted to get in (rat, rotr) before you have to pay”. It felt absolutely mobbed at epcot yesterday and AK today. I rode 2 rides in both parks and then gave up trying to ride. I mean, I don’t care too much cause it’s still disney but low crowds aren’t a thing this weekend.

The sad thing is that Studios has so many of our favorite rides.

As I am planning my December trip, this is becoming VERY apparent. I feel like HS is a poor version of DCA. All the best stuff but in an unappealing, poorly laid out package.

I would have killed to have Genie+ and Lightning Lanes open while we were there.

I hope they really do improve the experience.

The week of Columbus Day has been terrible for a number of years now.

My first CL 10 was MK on Saturday of Columbus Day in 2017! And it was definitely way hotter than I expected it to be.