I was browsing facebook and came across this ad by Adventures by Disney.

Has anyone done this particular one? I’m pretty big into Disney history (especially the behind-the-scenes side of things) and this is checking off a lot of boxes I’d like to see, but I’m wondering if it’s worth it? I really don’t want a tour that walks you past stuff in a rushed fashion just to get you to the next thing.

The price is pretty high, so going this year amongst the rest of my plans is likely not happening, so have they been offering this trip for a while? Think they’ll offer it again next year?

I have never done it, but it looks incredible to me!

Right? And what is really getting me is one of the dates matches up perfectly for when my WDW trip ends, but I’m still on my 2-week vacation from work…

Price is a factor but still…hmmmmm

If you can find a way to swing it, I totally would do it! When/if you do, please let us know how it is.

I must be out my friggin mind…

Too many things are lining up for this to be passed on.

So I’m in full on scheming mode now on how to nibble away the cost even more and how to plan to take full advantage of my time there. Let the games…continue?

Only thing that’s going to kill this now is I can’t get the flight by the time I get the points. Soooo slim and none. lol

But what a fun way to go!

Well there’s a bit of a hiccup.

I was about to hand over my credit card info and book the trip when they quoted me a much higher price than what I saw on the site(a whopping $800 increase). When I asked about the price difference, I was told it was because I was traveling alone. That’s the equivalent of more than 2 round trip flights for me.
So I think this particular plan is dead. It was already stretching my budget a bit, but an extra $800 “punishment” for traveling alone is just too much (might be a bit melodramatic, but it sure feels like a punishment).

So back to the drawing board.

As of right now, I’m toying with the idea of still trying to go and copy as much as I can from the original trip parameters(with a few things cut out obviously). But right now I’m not having much luck because it seems the only Behind-the-scenes tour is “Walk in Walt’s Steps.” Which sounds cool, but only 3 hours and only in-park.

Is there other BTS stuff I can see? The biggest draw for me was to see the Disney Animation Studio, is that at all possible without the Adventures package?

Bummer. I was all ready to live vicariously through your trip

That is a huge bummer & I would definitely qualify that as a punishment! Looking at the itinerary though, I do see right away where that difference comes from, the VIP tour in the parks is substantially cheaper when purchased in a group (can do it with up to 10 people). It’s still a pretty penny BUT considering what it starts out at, the cost when sharing with 9 other people is actually doable.

Anywho, I know nothing about the Animation Studios or most of the other tours outside of the parks, but I do know that you can do the Tom O’Shanter restaurant on your own.

Also, Walt’s apartment as you mentioned is available to book in the Walking in Walt’s Footsteps tour. It is 3.5 hours, but the experience of being in his apartment is worth every second & every penny (and this tour is a set per/person cost so no punishment for being a solo adventurer!). You also get lunch/dinner (depending on what time your tour is) with the tour & the guide will take you on 3 attractions.

When we did the tour last August lunch was from Jolly Holiday (and very tasty, served up to us individually at the end of the tour based on what we ordered at the start). And the 3 attractions were Alice, It’s a Small World & Great Moments with Mr. Lincoln. Your mileage will vary as the tour guide has flexibility to choose the 3 they take you on. I have heard of a lot of people get Haunted Mansion & we did walk right next to Haunted Mansion for a portion of the tour so it makes sense. I believe Pirates is also one they’ll choose from. I’m not sure of what else but I know I’ve never heard of Peter Pan or anything with a height requirement/FastPass being chosen. I had never heard of Mr. Lincoln being used, but it was cool to hear Walt’s perspective on Lincoln (spoiler alert, he thought very highly of him) & then watch the attraction that came to life from his love & passion for our 16th president. And then my favorite moment of the tour was in portrait gallery at the exit of the show (no spoilers here) but I’m sure even you don’t do the show they’ll at least walk you back here to play the clip they played for us).

That brings me to the audio you’ll hear on the tour: Probably about half of the audio clips amount I had already heard in one form or another being a casual history fan of the parks, so if you are already a die-hard fan you may not hear anything new, but it was neat to hear it while in the context of the parks. It was even neater to hear that my son (6 yrs old) recognized some of the quotes & their context.

The only other item on that itinerary that I know enough to comment on is the World of Color reserved viewing which is probably the seated VIP section. It’s a nice way to see the show for the pure fact alone that you wouldn’t have to camp out AND get a seat, but you can also reserve the dessert party for $79 and get a seat, treats, cocktails & an even better view than the VIP seats. If you weren’t looking to spend $79 for treats & such or an hour of your park time sitting down to enjoy your treats before the show, you can also pull a FP (for free) & get a decent spot showing up 40 or so minutes before (but still a pretty good solid time committment & would-be standing, but it is free!)

Either way, I hope you do end up going & finding some of the magic you were looking for at the Adventures trip. If you are still gung-ho about doing it, I would seriously considering rounding up some like-minded individuals to go in & decrease that VIP tour cost portion of the itinerary.

Most single supplements are down to the room cost. When they give you a per person estimate it’s usually for 2 people sharing. Especially at places like Disney where single rooms are pretty much unheard of. So you have to pay the portion of the rack rate that would have been covered by a companion. I travel alone a lot and I don’t even bother looking at deals or packages because I know when it comes to it my cost will be significantly higher than that shown. For example, to add my mother onto my California trip later this year including flights from the UK it cost an additional £300. So that brought my individual cost down from £1600 to £950. Ridiculous but that’s the way it is

Sure, I can totally understand that, but when the site says nothing about that anywhere (and I definitely looked after they told me), I wouldn’t feel like the rug was pulled out from under me. As it is, this came off as a sudden price jump, which pushed it out of my budget, and did nothing but frustrate and disappoint. It also seems kinda duplicitious. I mean, I look at groupon from time to time and always see that the single traveler stuff is a higher rate, but the point is…I see it listed. 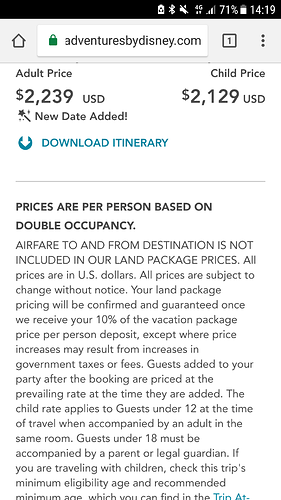 The “prices are per person based on double occupancy”? That’s seriously vague and doesn’t really say it’ll increase (but I guess can be reasonably expected). But yeah, definitely doesn’t say it’s a roughly 30% increase. ah well

I am so sorry! I was really looking forward to hearing about your trip. Maybe another trip when you are not traveling alone?